By Jarrett Renshaw and Matt Spetalnick

The meeting followed just a few days after a federal judge ordered the U.S. Department of Homeland Security to halt its efforts to end a public health order known as Title 42, a COVID-19 related policy that allows the expulsion of migrants to prevent the spread of the virus.

Mexican officials are concerned the repeal of the Trump-era measure to tighten the U.S. border will encourage a spike in migration and more profits for criminal gangs unless Washington does more to help mitigate the impact.

White House spokesperson Jen Psaki said “the majority of the conversation was about migration and was about continued work on coordination,” to reduce an expected flow of immigrants when that health order is lifted.

“The tone of the call was very constructive,” she told reporters. “This was not a call where President Biden was threatening the Mexican president in any way. They have been an important partner.”

In a tweet, Lopez Obrador characterized the call as “cordial” and announced that Foreign Minister Marcelo Ebrard would visit Washington on Monday.

Friday’s meeting also came as Mexico has been critical of Russia’s invasion of Ukraine but reluctant to join the United States and its European allies in issuing sanctions against Russia.

“We obviously hope that they will join us in imposing a cost on the Kremlin for what it is doing …. by working with us to enforce sanctions implemented by the United States and our partners,” a senior Biden administration official said on Friday.

The official said that the United States and Mexico would have “inevitably different approaches” but added they had a “common vision” that the war launched by Russian President Vladimir Putin was unjustified.

Lopez Obrador said earlier this month that Mexico does not accept the Russian invasion of Ukraine and “we are in favor of a peaceful solution to the conflict.”

Related News:   TikTok CEO To Testify In Front Of Congress

While his government backed a United Nations vote urging Russia to withdraw its forces from Ukraine, Mexico abstained in a vote at the General Assembly on suspending Russia from the U.N.’s human rights body.

The bilateral talks were also meant to prepare for the upcoming Summit of the Americas, which the United States will host in Los Angeles in June to convene leaders from North, South and Central America and the Caribbean.

The two countries made progress in security cooperation in October with the announcement of the Bicentennial Framework for Security, Public Health, and Safe Communities, but they still face hurdles on issues from immigration to energy.

The Biden administration had planned to end the Title 42 order on May 23, and Republicans have used the repeal to attack Democrats over immigration ahead of the midterm elections.

Biden, a Democrat, has struggled to implement what he describes as a more humane and orderly system at the U.S.-Mexico border amid record numbers of migrants arrested while crossing illegally, unfavorable court rulings, and political opposition from Republicans and some in his own party.

The March total is a 24% increase from the same month a year earlier, when 169,000 migrants were picked up at the border, the start of a rise in migration that left thousands unaccompanied children stuck in crowded border patrol stations for days while they awaited placement in overwhelmed government-run shelters. 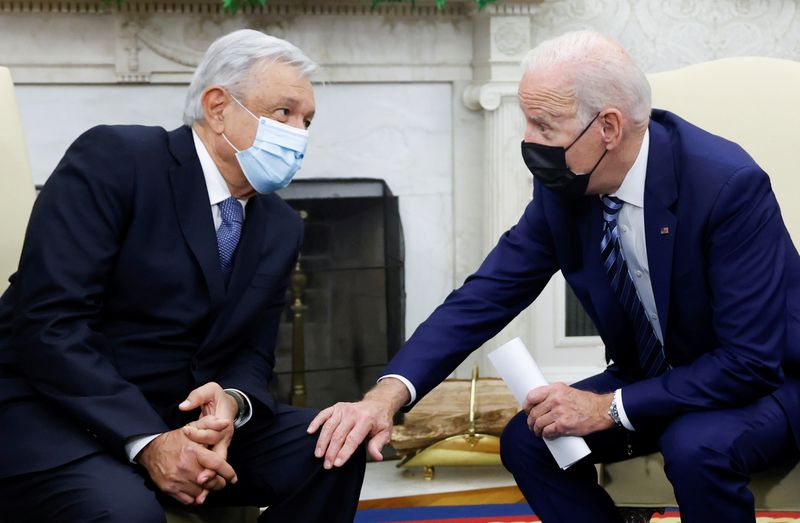