After being canceled for two years due to COVID-19 pandemic and boycotted by Donald Trump during his presidency, the event returned with gusto, featuring remarks by comedian Trevor Noah.

Biden opened his speech by cracking jokes about his low approval ratings, his age and Trump’s dislike of the media.

“I’m really excited to be here tonight with the only group of Americans with a lower approval rating than I have,” Biden said.

His remarks took a more serious turn, thanking journalists for their courage in covering Ukraine and beyond, before making a plea for national unity.

“A poison is running through our democracy… with disinformation massively on the rise,” Biden said. “You, the free press, matter more than you ever did in the last century. I really mean it.”

A recent rise in COVID-19 cases in Washington, in particular an outbreak at the journalists’ white-tie Gridiron dinner early in April, has brought an undercurrent of caution to the White House dinner.

Organizers required every attendee be tested for the virus, and some top officials, including infectious disease expert Dr. Antony Fauci, dropped out.

Biden took the opportunity to poke fun at Fox News hosts in attendance – many of whom voice skepticism of vaccines on air – by pointing out they had to prove vaccination status in order to attend.

Biden took extra precautions at the event by skipping the dinner portion and attending only the speakers program. He opted not to wear a mask while speaking.

In recent weeks, the president has mostly been unmasked at crowded White House events, but those events had lower attendance than Saturday’s dinner, which was expected to seat about 2,600 people.

The White House Correspondents Association was founded in 1914 and has held a dinner nearly every year since 1921 to celebrate the reporters who cover the presidency and raise money for scholarships.

Biden could not resist a jab at Putin in closing out his remarks.

“Trevor, the really good news is, now you get to roast the president of the United States,” he said to Noah, who gave the event’s roast. “And unlike in Moscow, you won’t go to jail.” 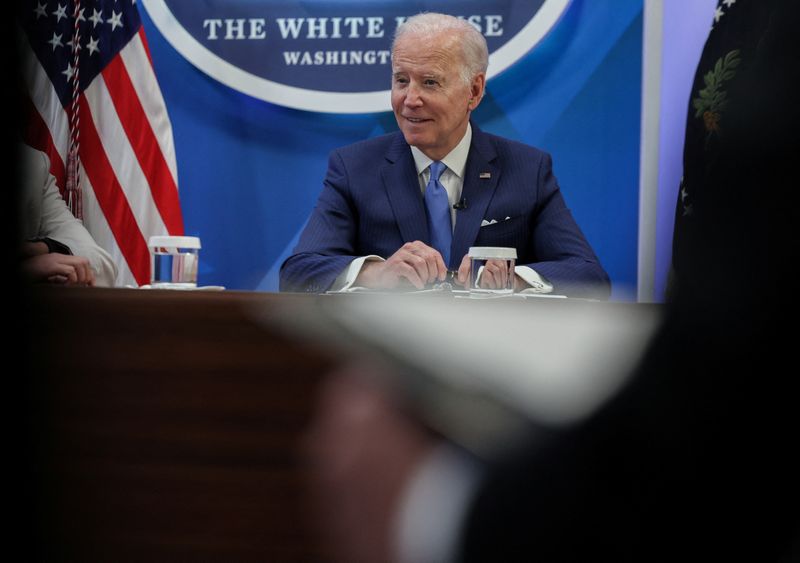