PRAGUE (Reuters) – The Czech National Bank is likely to raise its main rate by 50 basis points to 5.50% on May 5, a Reuters poll suggested on Monday, pushing borrowing costs to their highest level since 1999 to face still-surging inflation.

The central bank has already raised the two-week repo rate by 425 basis points since June, tightening aggressively to tackle inflation which rose to a 24-year high of 12.7% in March.

Energy costs have been a main driver of inflation, made worse by Russia’s invasion of Ukraine, and the bank has seen strong domestic demand adding to pressure at home.

In a Reuters poll, all 11 analysts expected the central bank to deliver another 50-basis point hike on Thursday, matching the rise delivered at the end of March.

Some analysts had earlier raised the prospect of a 75-basis-point hike, but have pulled back amid more cautious central bank comments.

Central bank Vice-Governor Marek Mora said in an April 26 interview with Reuters that the bank faced a dilemma whether to raise interest rates further as inflation soars but while demand gets hit by falling real incomes.

Vice-Governor Tomas Nidetzky said last week he expected there would be a debate between a standard 25-basis-point rise or a bigger 50-basis-point move at Thursday’s meeting.

Board member Tomas Holub told Bloomberg news agency in an interview last week that a 50-basis-point increase was the minimum that should be considered.

The central bank will announce its decision at 2:30 p.m. (1230 GMT) on Thursday, followed by a news conference at 3:45 p.m. where Governor Jiri Rusnok will present a quarterly update to a macroeconomic forecast.

Breaking News
Yellen: Not all recessions alike, inflation can come down amid full employment

Of the eight analysts who gave an outlook for rates beyond May, four expected rates would peak at 5.50%, while the other four were split over whether one more 25- or 50-basis point hike would come.

Besides interest rates, the bank is likely to continue debate on whether it could deploy some of its large foreign currency reserves to boost the crown and push down import prices. Some central bankers have expressed reservations about such a step. 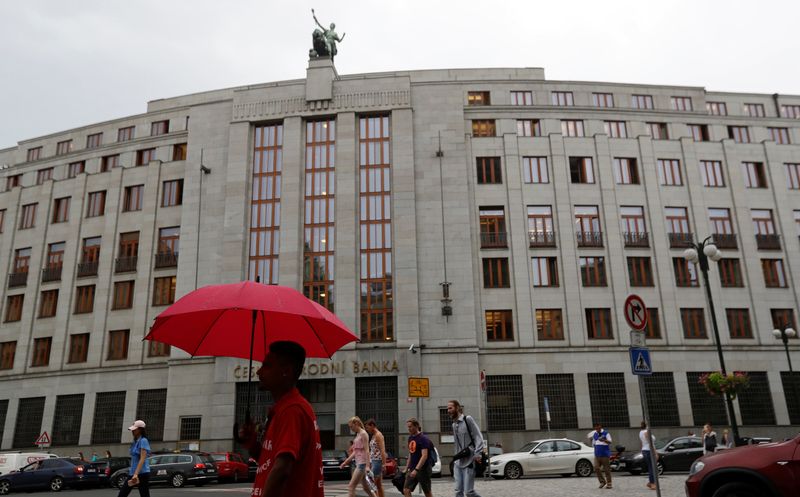