LOS ANGELES (Reuters) – Maria Hernandez spent countless hours in Honduras imagining a stable life in Los Angeles reunited with the two young daughters U.S immigration agents took from her at the border in 2017.

Instead, she and the children are living in a windowless homeless shelter a two-hour bus ride from the girls’ schools, after a government program brought her to the United States earlier this year.

U.S. President Joe Biden, a Democrat, came into office in January 2021 pledging to help families like Hernandez’s that were broken up at the U.S.-Mexico border by former President Donald Trump’s Republican administration. Biden formed a task force to reunite those who remained apart.

Of the 200 families the task force has so far reunited, including Hernandez and her daughters, around three-quarters have struggled with housing insecurity, according to previously unreported data collected by two groups that aid them, Together & Free and Seneca Family of Agencies.

Reuters was not able to independently verify the data.

Calling it a “moral imperative” to reunite the families, a spokesperson for the U.S. Department for Homeland Security (DHS) said in a statement to Reuters that the government was working with the private sector to provide housing, when needed, and other resources, but added that funding was a challenge.

Biden requested $20 million for the task force in his budget proposal for fiscal year 2023, which begins on Oct. 1. Congress has not yet passed next year’s spending bill. DHS did not respond directly to a question about the data provided by aid groups showing how many reunited families have housing problems.

Other recently arrived migrants struggling with housing do not qualify for government support. But activists say the government has a duty to help settle families that were separated because they are suffering lasting trauma as a direct result of U.S. policies implemented by the previous administration.


Four years ago, after Hernandez crossed the border to ask for asylum, immigration officers pried her daughters from her arms under a policy aimed at deterring migration.

The youngest girl, Nicole, was just 3 years old at the time. Michelle was eight. They were sent to a government-run center for migrant children and then to live with their older brother in Los Angeles.

Hernandez was deported to Honduras.

Close to 4,000 children were separated from their parents at the border during the Trump years, according to DHS, which leads the taskforce. The Trump-era policy sparked international outrage and many families were reunited before Biden took office. Some 1,000 children are still separated from their parents and the government says it is working to bring those families together.

On arriving in the United States, many of the parents reunited by the Biden taskforce start work immediately to make ends meet, with no time to get reacquainted with their children, or to heal trauma, said Kate Wheatcroft, executive director of Together & Free.     Other than some mental health services they are eligible for due to a court ruling, “the minute they get off the plane, the government assistance to them stops,” she said.

The families are given temporary parole into the United States for three years, with the option to renew, and are permitted to work.

DHS Secretary Alejandro Mayorkas met with reunited families last August and apologized for the separations, while acknowledging their ongoing pain and trauma, the agency said.

The spokesperson said the agency was seeking to act with “great care and sensitivity to avoid retraumatizing families.”


The U.S. Department of Justice (DOJ) is negotiating in a long-running lawsuit brought by the American Civil Liberties Union (ACLU) to provide stable immigration status and access to emergency food and housing, said ACLU attorney Lee Gelernt. He said discussions in the case were moving forward “in good faith.”

The Wall Street Journal reported in October 2021 that payouts could reach around $450,000 per person. The amount under discussion at the time was close to that number, a person familiar with the matter told Reuters, requesting anonymity to share details about the negotiations.

After the figure became public and sparked Republican outrage, the DOJ – which was considering a smaller settlement – backed out of the discussions entirely. The decision was made at the highest levels of the White House, according to a U.S. official and another person with knowledge of the matter.

The DHS referred questions about the settlement talks to DOJ, which declined to comment.

After Hernandez arrived in the United States from Honduras, she moved in with her adult son, Maynor, and his sisters.

The landlord was unhappy with the number of people in the tiny one-bedroom apartment and asked them to leave, Hernandez and her attorney at the advocacy group Al Otro Lado said.

Reuters has been following the family since 2020 and is referring to the girls by their middle names to protect their privacy.


Seneca Family of Agencies found Hernandez an Airbnb for a month to give her time to find a new apartment. When she was unsuccessful, a case manager at Al Otro Lado scrambled to find another option.

In March, Hernandez and her daughters moved into the homeless shelter, an industrial building next to a freeway.

A few days a week, Hernandez cooks at a friend’s house for her daughters, who don’t like the food at the shelter.

On a Thursday morning in April, Reuters accompanied Hernandez and the girls as they left the shelter in the dark at 6 a.m. and walked to the nearby bus stop. They changed buses twice, arriving at the corner between Michelle’s middle school and Nicole’s elementary school at around 8 a.m.

Nicole, now 7, and Michelle, now almost a teenager, played games on Hernandez’s phone to pass the time, and she bought them tamales for breakfast before seeing them off.

The next day, Maynor scored a short-term job renovating a Spanish-style bungalow in North Hollywood with a backyard pool. Reuters met him there. He had brought Hernandez along, and she got to work painting walls and sanding floors in the bedroom, while he tackled the living room, both of them sweating in 100-degree heat.

She’s used to hard work. In Honduras, she harvested bananas on a mountain plantation.

In the early hours of the morning, while she takes the girls to school, Hernandez said Maynor drives around Los Angeles delivering oranges he sells to make ends meet so that he doesn’t lose clients while they work on the renovation during the day.

The shelter recently made space for Maynor and his truck, after a period in which he slept in the vehicle on the street, keeping guard over the oranges.


When she’s not working, Hernandez is looking for apartments.

Some places in her price range are for only one person or a couple, she said, and landlords balk when she says there are four of them.

Her stay at the homeless shelter is limited to 90 days. Advocacy groups are trying to help but she is increasingly worried as the weeks tick by.

When she goes to the laundromat, she asks if people know of rentals. Recently, a Guatemalan woman gave Hernandez her landlord’s phone number. But when Hernandez called, she was told the building was full.

“It stresses me out,” said Hernandez. “My head hurts.” 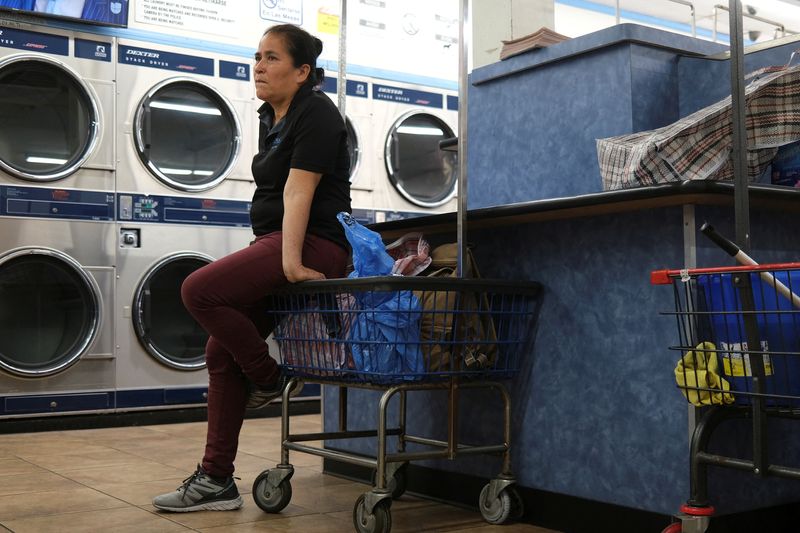 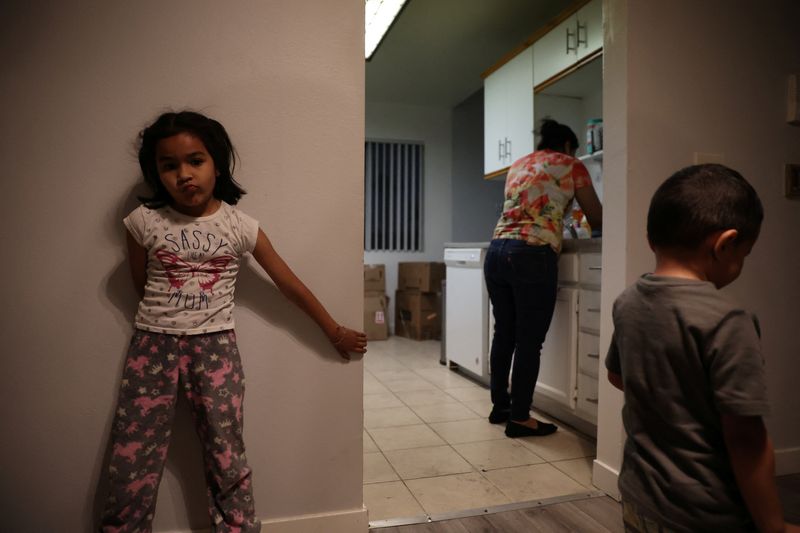 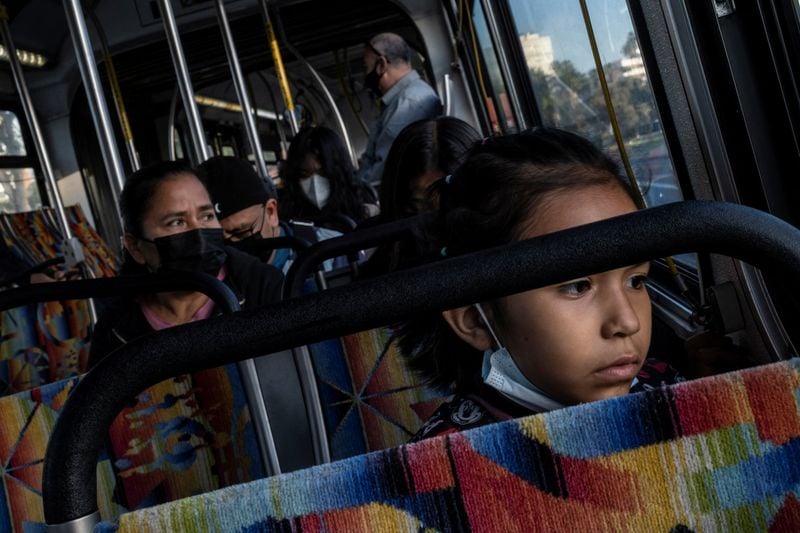 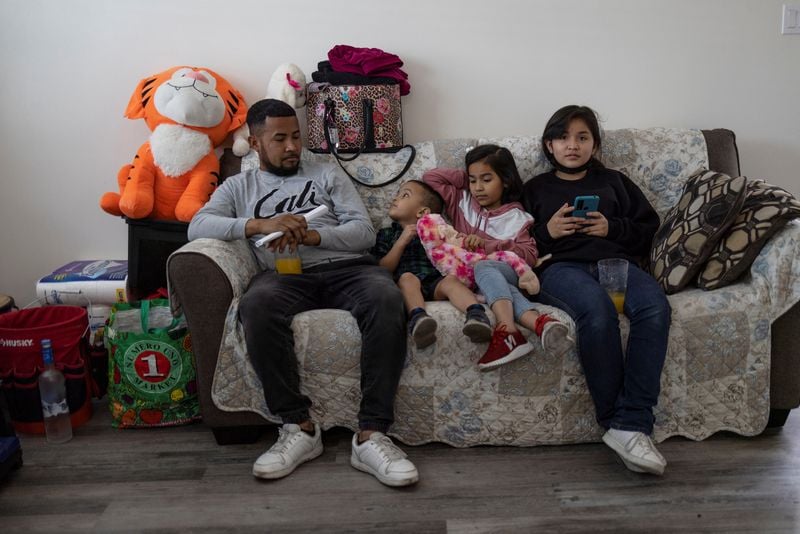 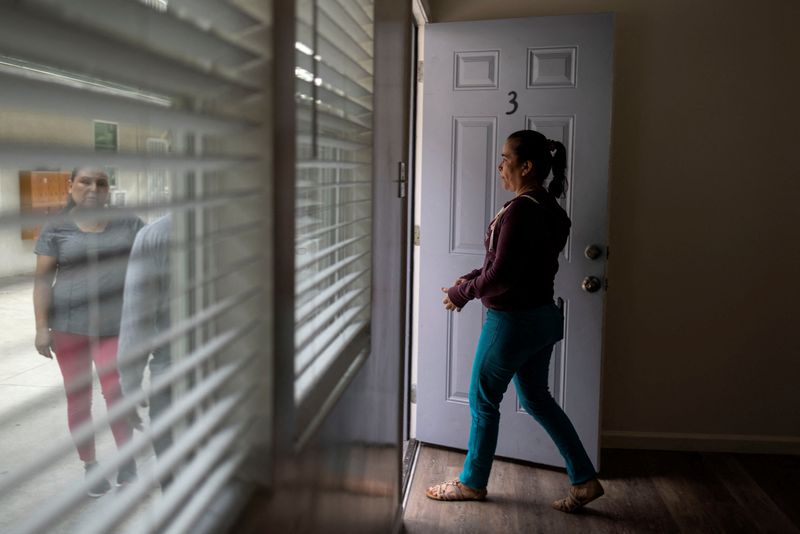