(Reuters) – Vice President Kamala Harris said on Tuesday that the potential Supreme Court decision overturning Roe v. Wade represents an attack on women and lashed out at Republicans for “weaponizing” the issue, offering a first glimpse of how the White House might use the battle for abortion rights to energize voters in the upcoming midterm elections.

“If the court overturns Roe v. Wade, it will be a direct assault on freedom,” Harris, a Democrat, told attendees at a gala hosted by Emily’s List, an organization which works to get abortion-rights Democrats elected to office.

The event comes after a draft Supreme Court decision, leaked late on Monday, showed that the court’s conservative majority is prepared to overturn the landmark 1973 Roe v. Wade decision guaranteeing a women’s right to an abortion. The court confirmed the authenticity of the leaked document.

The Harris speech was planned before the leak of the ruling, but has taken on added meaning.

Harris is a natural choice for the Biden administration to raise the issue on the midterm campaign trail if the Supreme Court adopts a version of the draft opinion and throws away five decades of federal protection of abortion rights.

Republicans are expected to take control of the House of Representatives and perhaps the Senate after the midterm elections in November, but Democrats are now seeking to use the abortion issue to energize voters. Democrats now hold a narrow majority in both chambers.

Nearly two-thirds of Americans said they are more likely to back candidates who support the right to abortion in the November midterm elections, according to a Reuters/Ipsos poll conducted on Tuesday. https://www.reuters.com/world/us/majority-americans-prefer-political-candidates-who-support-abortion-reutersipsos-2022-05-03

Harris, who has won awards from abortion rights groups, spoke at Emily’s List’s 30th anniversary gala in 2015 after launching her Senate bid, making a trip to Washington to address the group before even speaking about her campaign in her home state of California.

On Tuesday she said the last 24 hours have made it clear where Democrats and Republicans stand.

Experts estimate that about one in four women will obtain an abortion in her lifetime, of whom 75% are low-income, 59% are already mothers, and 55% are experiencing disruptive life events such as losing a job, according to Caitlin Myers, an economics professor with a focus on the effects of reproductive policies at Middlebury College. 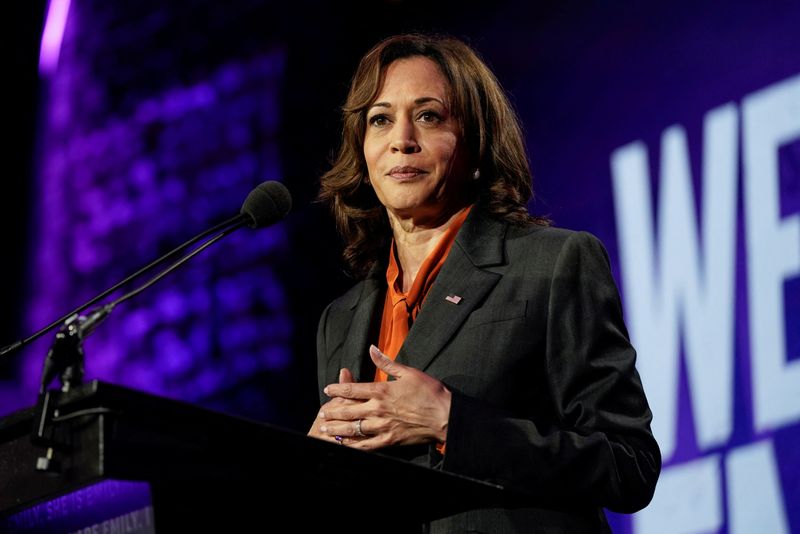