By Jeff Mason and Jarrett Renshaw

In what could be a preview of a midterm campaign speech, Biden took aim at what he dubbed “MAGA” Republicans who he charged with protecting billionaires at the expense of working class Americans while only paying lip-service to budget responsibility.

Biden and his fellow Democrats have come under fire from Republicans for a historic rise in inflation that some critics say stems from overspending in Washington amid the COVID-19 pandemic as well as global supply constraints.

Biden noted on Wednesday that the annual deficit is going down – thanks to increased revenue as the economy emerges from the pandemic and winding down of COVID emergency spending – something that never happened under Trump.

“The bottom line is the deficit went up every year under my predecessor, before the pandemic and during the pandemic. And it’s gone down both years since I’ve been here.”

Biden took aim at Republican U.S. Senator Rick Scott’s economic plan, saying it would raise taxes on 75 million Americans, most of whom make less than $100,000 a year. Scott is leading Republican efforts to get Republicans elected to the Senate.

Scott’s campaign staff did not immediately respond to requests for comment.

The Republican National Committee said nothing Biden had done reduced the deficit and said his legislative plans, if passed, would only increase it.

The United States has reported budget deficits every year since 2001. Beginning in 2016, increases in spending on Social Security, healthcare and interest on federal debt have outpaced the growth of federal revenue.

In the past few years, the annual deficit has ballooned to around $3 trillion due to pandemic spending and loss of revenue. In 2017, Republicans ushered in a massive tax-cut bill under Trump that by some estimates has added more than $1 trillion to the debt.

“The previous administration increased the deficit every year it was an office in part because of its reckless $2 trillion tax cut. I know you’re tired of hearing me saying that but a $2-trillion tax cut that was not paid for,” Biden said.

Supporters of Trump have noted that the economy under Trump saw historically low unemployment coupled with record highs in the stock market.

Biden noted that the budget deficit fell by more than $350 billion in his first year and is projected to fall by more than $1.5 trillion this year – the largest deficit reduction in a single year on record and a revision up from the $1.3 trillion projected in the president’s budget released earlier this year, according to an administration official.

The Treasury Department also estimates that it will pay down the national debt this quarter for the first time since 2016.

(Reporting by Jeff Mason and Jarrett Renshaw;Editing by Nick Zieminski) 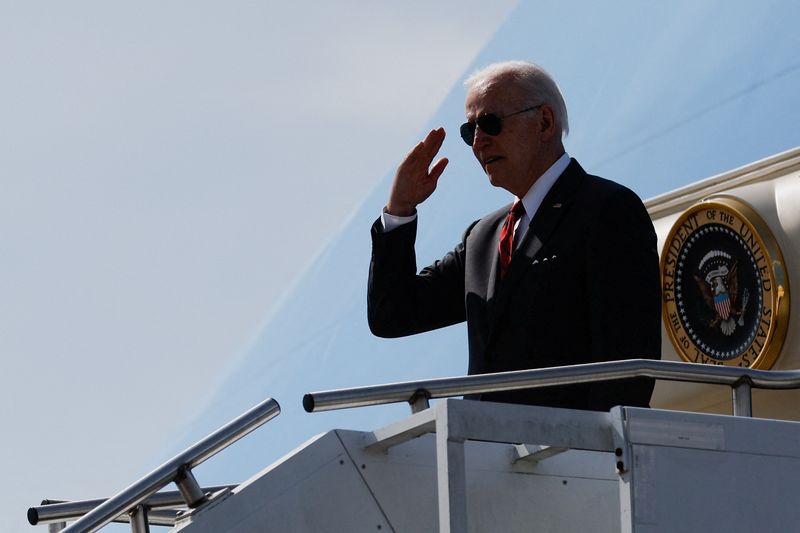