(Reuters) -The Russian rouble jumped on Wednesday to a more than two-year high against both the dollar and euro, retaining the support of hefty capital controls as the European Union proposed a new package of sanctions against Russia over events in Ukraine.

Movements on Russian markets are affected by the rouble being propped up by capital controls, while stocks are trading with a ban on short selling and foreign players barred from ditching shares in Russian companies without permission.

European Commission President Ursula von der Leyen proposed a phased oil embargo on Russia, as well as sanctioning its top bank and banning its broadcasters from European airwaves, in a bid to deepen Moscow’s isolation.

But with markets returning to action for a few days in the middle of Russia’s long May holidays and no concrete signs that the central bank will scale back controls any time soon, exporters were actively selling foreign currency, concerned that further rouble strengthening would eat into their holdings.

Market participants question whether the current rate is sustainable in light of the curbs, after the rouble sank to a record low in early March as Western nations pounded Moscow and its financial system with unprecedented sanctions.

Investors were treated to a busy final day of trading before the holidays on Friday, as the central bank slashed rates by 300 basis points to 14% and the finance ministry said it had managed to pay interest on dollar Eurobonds, an apparent late swerve to avoid default after it previously vowed to pay only in roubles.

Lower rates support the economy through cheaper lending but can also fan inflation and make the rouble more vulnerable to external shocks.

Even with expectations for rates to fall further, the impact on the rouble is unlikely to be noticeable for now, said Evgeny Zhornist, portfolio manager at Alfa Capital.

“The trade balance surplus along with high global commodity prices are providing a steady inflow of foreign currency into the country, while forex restrictions and the freezing of foreign exchange reserves are making outflows more difficult,” he said, all of which means the rouble may strengthen further.

But the currency’s current dynamics do make the easing of currency controls, which the central bank touched on last Friday, more likely, said Viktor Grigoriev of Bank St Petersburg.

Shares in Russia’s largest lender Sberbank underperformed, falling 4.4% after the European Commission proposed removing it and two other banks from the international SWIFT transaction and messaging system.

Veles Capital analysts said the sanctions on banks were unpleasant for the sector, but not critical.

Flag carrier Aeroflot was an outlier, climbing 0.2% on the day, after the airline’s board recommended increasing the company’s share capital.

(Reporting by Reuters; Editing by Alex Richardson and Mark Heinrich) 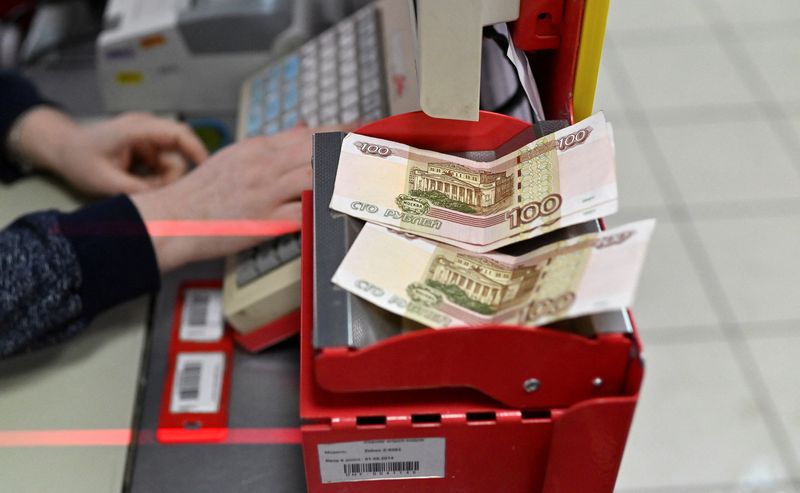