KYIV – A month after fleeing the besieged Ukrainian city of Mariupol with her sister, 21-year-old Nicole breaks down in tears as she thinks of her mother, who they left behind and have since lost contact with.

She, sister Vira and Vira’s four-year-old son made their escape on foot on April 1, the first part of a five-day odyssey that ended in the southern town of Zaporizhzia, having left a note for their mother on the table of apartment.

They spoke to her twice in mid-April but have been out of contact since then and, with the southeastern port city having been subject to relentless Russian bombardment, they fear for her safety.

“When I last saw my mother, it felt like a normal visit in unusual circumstances,” said Nicole, who declined to give her family name and whose account Reuters was unable to independently verify. “I could never have imagined that I wouldn’t be able to call and ask them how they are doing.”

“…It’s impossible to open my photo library and look at pictures of us laughing, having fun. This is practically suicide,” she added, before breaking off in tears.

After a weeks-long siege, Mariupol is now under Russian control apart from its Azovstal steel works, where Ukrainian officials believe around 200 civilians remain trapped along with fighters in a network of underground bunkers.

More than 300 civilians were evacuated from Mariupol and other areas in southern Ukraine as part of a joint U.N.-Red Cross operation that concluded on Wednesday.

Russia has denied targeting civilians since invading Ukraine on Feb. 24 in what Moscow calls a “special military operation.”

Mariupol has been an important target in Russia’s efforts to cut Ukraine off from the Black Sea as well as link Russian-controlled territory in the east of the country to Crimea, seized by Moscow in 2014.

Sitting in a Kyiv park with Vira and her son – the trio having travelled on from Zaporizhzia to the relative safety of Ukraine’s capital – Nicole said they were constantly seeking news on the situation in Mariupol. “All day, every day, we live by the news, live by messages about what’s going on.”

The sisters joined a protest in Kyiv’s Independence Square holding posters recounting their ordeal, “66 days of waiting, Save Mariupol, Azovstal”.

Despite the lack of news, Nicole remains hopeful. “Right now there is a chance to evacuate, and we hope that at one point they will pick up their bags, emergency suitcases … and get out in some way, and meet us,” she said. 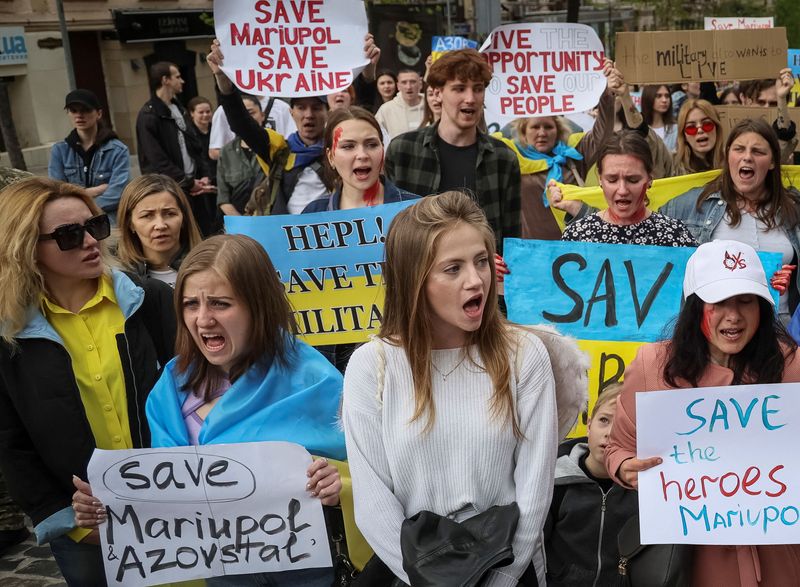