(Reuters) – Republican Jody Hice, the Donald Trump-backed U.S. congressman seeking to become the top state election official in Georgia, wasted little time at a debate this week summarizing the cause driving his campaign.

“The ‘big lie’ in all of this is that there were no problems with this past election,” he said in the debate’s first few seconds on Monday. “This past election was an absolute disaster under the leadership of Brad Raffensperger.”

The incumbent Raffensperger has been one of Trump’s most frequent targets ever since he refused, emphatically and publicly, to capitulate to the demands of the former president, his fellow Republican, to “find” enough votes to overturn the results in Georgia’s 2020 presidential vote.

Hice has centered his candidacy for the secretary of state’s office on amplifying Trump’s baseless claims that he actually won the Georgia presidential vote, and by extension the White House, but lost due to widespread voter fraud.

The May 24 primary election will be a test of whether Trump’s persistent assertions that the election was rigged can still animate Republican voters a year and a half after his loss to Democrat Joe Biden.

Georgia’s Republican primary contest is one of nearly 20 across the country this year in which Trump-supported candidates who have echoed his false assertions are running to become their states’ chief election overseers, according to a tally by States United Action, a nonpartisan advocacy group for fair elections.

That trend alarms voting rights groups, who fear that politicians asserting unsubstantiated claims of fraud will have the power to alter election results in 2024, when Trump has said he may run again for president.

A member of the conservative Freedom Caucus in the U.S. House, Hice was at a White House meeting in December 2020 to discuss ways of blocking the certification of the presidential election in Congress on Jan. 6, 2021, according to documents released by the House committee investigating the attack that day on the U.S. Capitol. He voted against certifying Biden’s win hours after the riot.

The congressman has criticized Raffensperger for measures he took to accommodate voters during the coronavirus pandemic, including mailing absentee ballot applications to all registered voters and installing ballot drop boxes.

“Jody Hice has been running around Georgia for the last 18 months lying about our election process,” Raffensperger said at Monday’s debate in Atlanta.

In a January 2021 phone call, Trump pushed Raffensperger to “find” the votes needed to flip the margin. The call, which was recorded and broadcast widely on cable news channels, led to a criminal investigation by state prosecutors into whether Trump’s request was illegal and made Raffensperger a national figure.

A special grand jury to help oversee the investigation was selected on Monday.

Trump has endorsed candidates in other Georgia races, most notably former U.S. Senator David Perdue, who is challenging Republican Governor Brian Kemp. Perdue also has focused much of his campaign on re-litigating the 2020 election, faulting Kemp for not doing more to reverse the results.

Kemp has a substantial lead over Perdue, but Hice and Raffensperger appear locked in a tight race, according to an April opinion poll commissioned by the Atlanta Journal-Constitution.

Hice raised $1.6 million through January, according to campaign finance reports, while Raffensperger took in less than $600,000. The campaigns are due to file updated spending reports this week.

Jay Williams, a Republican strategist in Georgia, said he sees no path for Raffensperger to prevail given his public feud with Trump.

“I’ve felt for a long time he’s toast, and I still think he is,” Williams said.

Raffensperger, mindful that many Republican voters have been swayed by Trump’s repeated claims of fraud, has made election integrity his top priority. He has called for an investigation into whether hundreds of non-citizens tried to register to vote and endorsed Republican-backed legislation to give law enforcement greater authority to investigate voter fraud.

“He has been very aggressive, reinforcing the idea that he is a meticulous follower of the law,” said Chuck Clay, a former state Republican chair and former state senator.

“A true Republican wouldn’t have sold the Republican Party out and allowed our president to be cheated out of an election,” she said.

Two other Republican candidates, former Alpharetta Mayor David Belle Isle and T.J. Hudson, a former probate and magistrate judge, also are challenging Raffensperger from the right. If no candidate receives more than 50% of the vote, the two leading vote-getters would head to a June runoff.

State Representative Bee Nguyen is the leading candidate on the Democratic side. 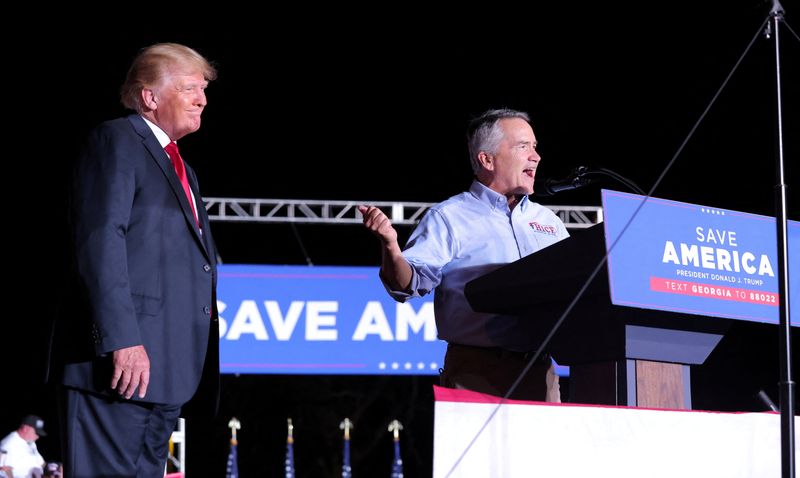 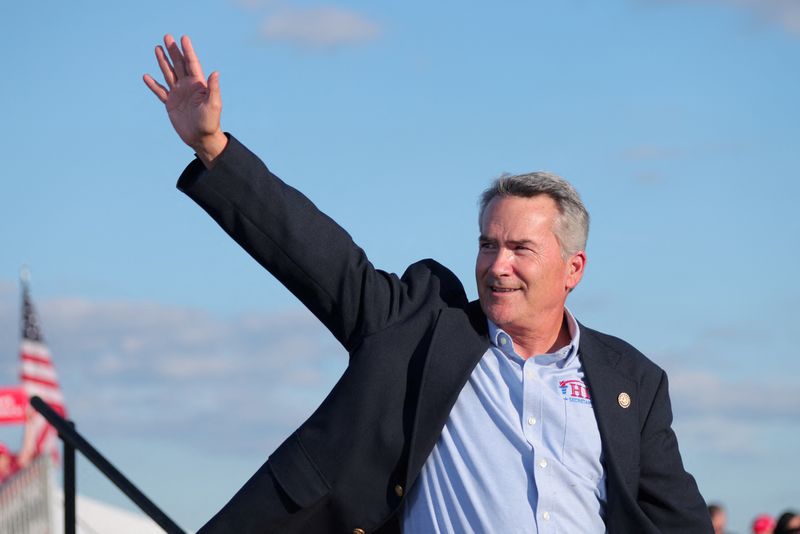 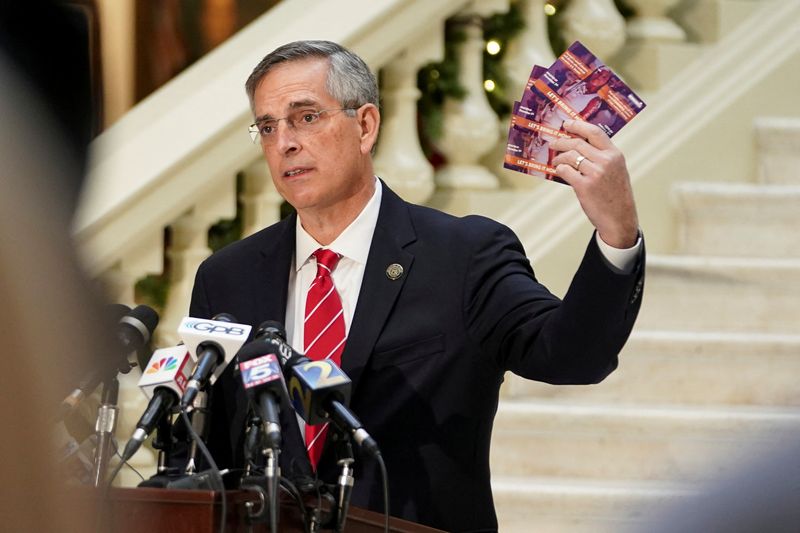 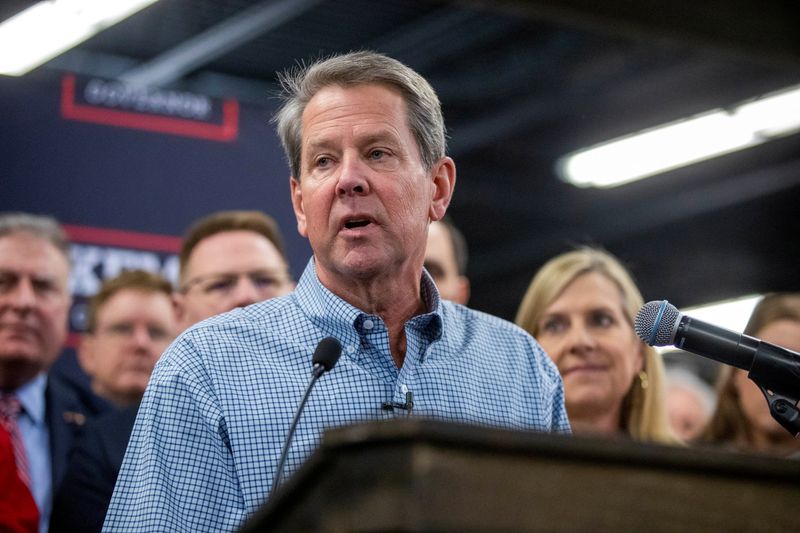 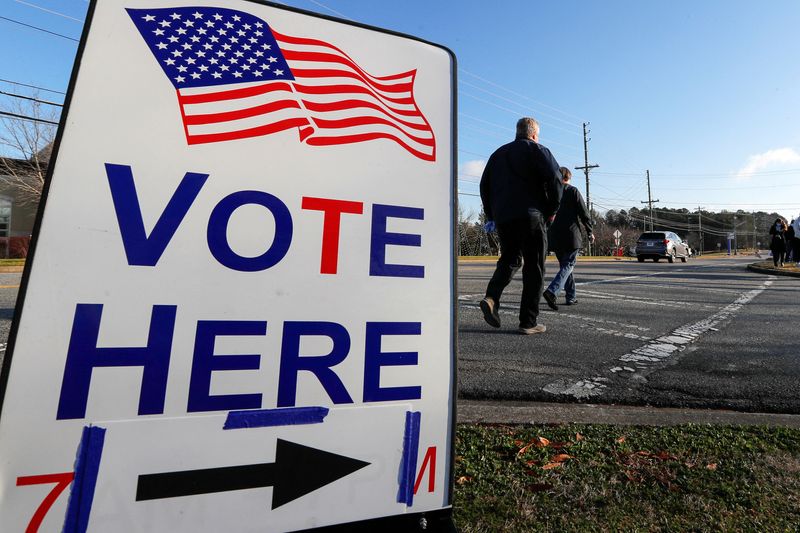