FLORENCE, Italy – A meeting of European Union foreign ministers will be held next week should countries from the bloc fail to reach an agreement over an oil embargo against Russia by the weekend, the EU’s foreign policy chief Josep Borrell said on Friday.

The European Commission is proposing changes to its planned embargo on Russian oil in a bid to win over reluctant states, including Hungary, Slovakia and the Czech Republic.

Speaking to reporters on the sidelines of an event in Florence, Borrell reiterated he had faith in reaching “a solution that is shared, as not all countries are in the same situation,” adding a deal had to be found quickly.

The European Union’s executive proposed the oil embargo on Wednesday as part of a wider package of EU sanctions on Russia – the sixth since Moscow invaded Ukraine on Feb. 24 in what the Kremlin calls “a special military operation”.

Asked about a possible embargo on gas imports, Borrell said “gas is not for tomorrow, (but) for the day after tomorrow,” indicating the EU needed to take one step at a time in its sanctions against Russia.

Earlier on Friday he said the bloc needed to be “realistic” in its plans to become independent from Russian energy and that it needed to do so in an “orderly and prudent way.”

“Gas cannot be substituted with something else… if it’s not Russian gas it needs to be gas anyway,” he said.

Europe, which sources about 40% of its gas imports from Russia, has been scrambling to diversify its energy supply mix as the conflict in Ukraine escalates.

The top diplomat added there were several ways of hitting Russia’s oil exports and that action might not be just limited to a simple ban on buying the oil.

“If insurance companies don’t provide the insurance for the transportation of Russian oil, it’s going to be a big problem for Russian oil exports – not only to the EU but to rest of world,” he said, without giving further details.

(Reporting by Silvia Ognibene in Florence and Giulia Segreti in Rome, editing by Maria Pia Quaglia and Raissa Kasolowsky) 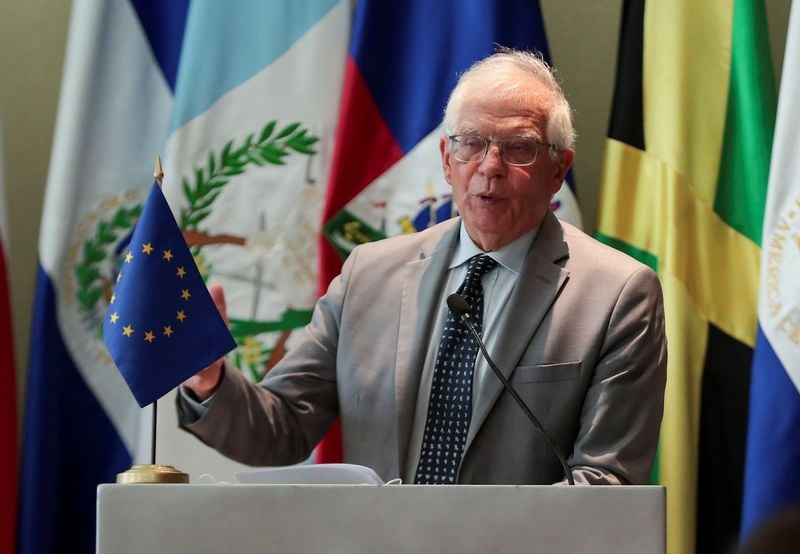