WASHINGTON – With a war in Europe underway, a pandemic still locking down parts of the global economy and financial markets having turned sharply volatile, the U.S. economic outlook remains unpredictable.

But Federal Reserve Chair Jerome Powell this week offered his most detailed account yet of the strategy for confronting a generational inflation shock while avoiding any meaningful rise in unemployment.

There is plenty that could go wrong, either in the direction of an even larger inflation problem or an economy that starts to buckle unexpectedly.

The Powell Fed is trying to cover both possibilities.

Powell, with little ambiguity, said in a news conference on Wednesday that while the Fed would not hesitate to raise interest rates as high as needed to curb inflation, policymakers weren’t ready to deliver a shock treatment, such as a three-quarter point rate hike.

His comments came after the Fed announced it would raise its benchmark overnight interest rate by half a percentage point and start next month to reduce its balance sheet.

Some analysts felt Powell came off as unintentionally “dovish” in doing so, and investors, after wavering for a bit, remain convinced the Fed will have to move faster.

But there’s another possibility.

“I don’t think it was a slip of the tongue,” said former Fed monetary policy chief Bill English, currently a professor at the Yale School of Management. “They don’t want to be a source of uncertainty, so move steadily. Seventy-five (basis points) might have shaken things up.”

Powell was unusually explicit in flagging the likelihood of half-point rate increases at the next two Fed meetings.

Fed forward guidance is more traditionally done with modifiers like “gradual” that investors translate into an expected pace of rate hikes.

Powell seems ready instead to simply say what’s likely to happen. His Wednesday press conference was the third recent instance when he has effectively pinned down future meeting outcomes. While decisions are not final until policymakers vote, Powell may be reasserting his voice as chair at a time when he wants the message to stay clear and simple, and not be muddied by public debate among his colleagues.

“It is in some sense old school monetary policy,” said former top Fed staffer Vincent Reinhart, chief economist at Dreyfus and Mellon. What Powell is saying is, “In an environment of uncertainty we are not sure where we are going to wind up. We do know which direction we should head, and the more we do it the closer we will be to where we should be and I will let you know then.”

“NEUTRAL” IS A BIG TENT

Fed officials say they will raise the fed funds rate “expeditiously” to “neutral,” a level that in theory won’t encourage households and businesses to borrow and spend, but won’t discourage them either.

But it is a squishy concept and may vary over time.

Powell on Wednesday clarified that the aim is to reach “the broad range of plausible levels of neutral,” which officials put at between 2% and 3% for the target federal funds rate.

By shifting to half point instead of quarter point rate hikes, the federal funds rate will now be at the lower end of that range in July, a fact appealing to those officials who want monetary policy to be “front loaded,” or tightened faster. It also leaves room for the Fed to assess over the next two months how inflation and the economy are behaving, and then change the pace of rate hikes as needed — a fact appealing to those worried about triggering a recession.

As much as an economic concept, the drive to neutral — as broadly as Powell defined it — keeps policymakers across the spectrum on the same page without committing them to a pace of rate hikes or a final destination.

Among the many unusual aspects of the economy’s reopening from the pandemic is the high number job openings compared with the number of people looking for work, with nearly two vacancies for everyone unemployed.

Measured differently, Goldman Sachs economists note that the total number of jobs plus openings is about 5.6 million more than the total labor force, a huge gap that suggests something is out of whack. It has made it hard for businesses to hire and may have begun to add to inflation through higher wages.

The Fed’s hope is that the reckoning can come not through an actual rise in unemployment – a common outcome when monetary policy tightens quickly – but by getting businesses to scale back hiring plans as demand ebbs under the influence of higher interest rates.

Powell on Wednesday would not say what he is aiming for. But in the years just before the pandemic, when the vacancies-to-unemployed ratio was 1.2-to-1, jobs and wages were growing at a sustainable rate, and inflation was near the Fed’s 2% target.

Powell, as much as at any time in the pandemic, has tried to make a virtue of uncertainty, and acknowledge what the Fed does not know and what it cannot control. On Wednesday he noted some signs inflation might be peaking, but also that “further surprises could be in store.” He said inflationary psychology is not taking hold, but opened his press conference with an appeal to “the American public” about his commitment to slowing prices, as if to help keep that psychology in check.

The subtext: Be ready for anything. 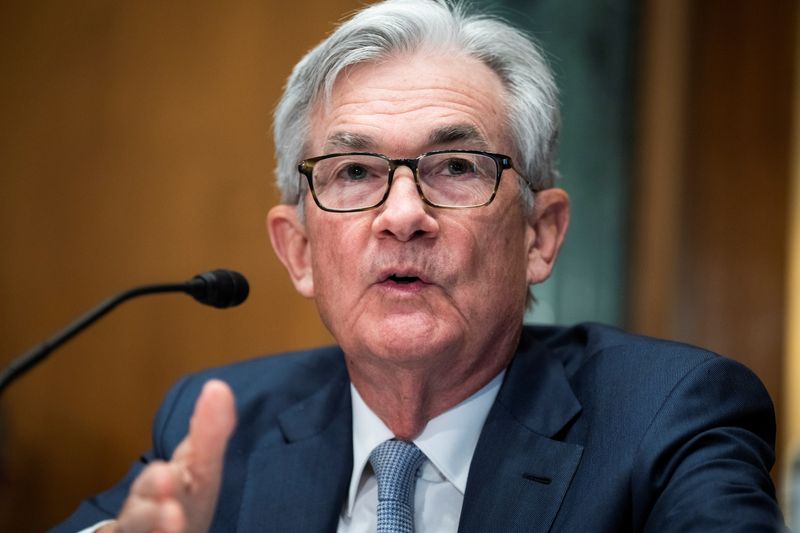