NEW DELHI (Reuters) – Sri Lanka’s economic crisis has turned into deadly violence. Eight people died and over 200 were injured on Monday, the country’s powerful prime minister quit and his brother, the president, is seeking ways out of the chaos.

Anti-government protesters angry over power blackouts, shortages of basic goods and rising prices demand that President Gotabaya Rajapaksa steps down, but the retired military officer has invoked emergency powers in an attempt to maintain control.

The violence and political chaos gripping the island nation of 22 million comes 13 years after a brutal civil war ended in a bloody denouement in which tens of thousands of people were killed.

India, Sri Lanka’s northern neighbour, has extended billions of dollars in loans to help the country pay for vital supplies.

China, which has invested heavily in infrastructure projects in recent years in what analysts say is an attempt to extend its influence across Asia, has intervened less publicly but said it supported efforts for the island nation to restructure its debt.

Sri Lanka’s vital negotiations with the International Monetary Fund (IMF) over a rescue plan, as well as plans to restructure its sovereign debt, could be thrown into disarray.

HOW DID IT COME TO THIS?

Analysts say that economic mismanagement by successive governments weakened Sri Lanka’s public finances, leaving national expenditure in excess of its income and the production of tradable goods and services at inadequate levels.

The situation was exacerbated by deep tax cuts enacted by the Rajapaksa government soon after it took office in 2019. Months later, the COVID-19 pandemic struck.

That wiped out much of Sri Lanka’s revenue base, most notably from the lucrative tourism industry, while remittances from nationals working abroad dropped and were further sapped by an inflexible foreign exchange rate.

To keep the economy afloat, the government leaned heavily on its foreign exchange reserves, eroding them by more than 70% in two years.

WHAT DID THE GOVERNMENT DO?

Despite the rapidly deteriorating economic environment, the Rajapaksa government initially held off talks with the IMF.

For months, opposition leaders and some financial experts urged the government to act, but it held its ground, hoping for tourism to bounce back and remittances to recover.

Eventually, aware of the scale of the brewing crisis, the government did seek help from countries including India and China, regional superpowers who have traditionally jostled for influence over the strategically located island.

In all, New Delhi says it has provided support worth over $3.5 billion this year.

Earlier in 2022, President Rajapaksa asked China to restructure repayments on around $3.5 billion of debt owed to Beijing, which in late 2021 also provided Sri Lanka with a $1.5 billion yuan-denominated swap.

Despite outside support, fuel shortages have caused long queues at filling stations as well as frequent blackouts, and some crucial medicines have run low.

President Rajapaksa has sought support from all political parties in parliament to form a unity government, an offer that many, including the ruling alliance’s allies, have declined.

On Monday, Prime Minister Mahinda Rajapaksa, the president’s older brother, wrote in his resignation letter that he was quitting so that an interim, all-party government could be formed.

The president plans to meet opposition politicians with the expectation of forming a new government within days, according to a cabinet spokesman.

But thousands of protesters, some of whom have camped out on the streets for weeks to the chants of “Gota(baya) go home”, also want the president to step down.

Pro- and anti-government demonstrators clashed on Monday in the commercial capital Colombo in an escalation of violence, and houses and cars have been torched in other parts of the country.

Some Sri Lankan business groups are leaning on the country’s politicians to quickly find a solution.


In a statement on Tuesday, the Joint Apparel Association Forum, which represents Sri Lanka’s vital apparel industry, said it was “critical” for a new government to take charge. 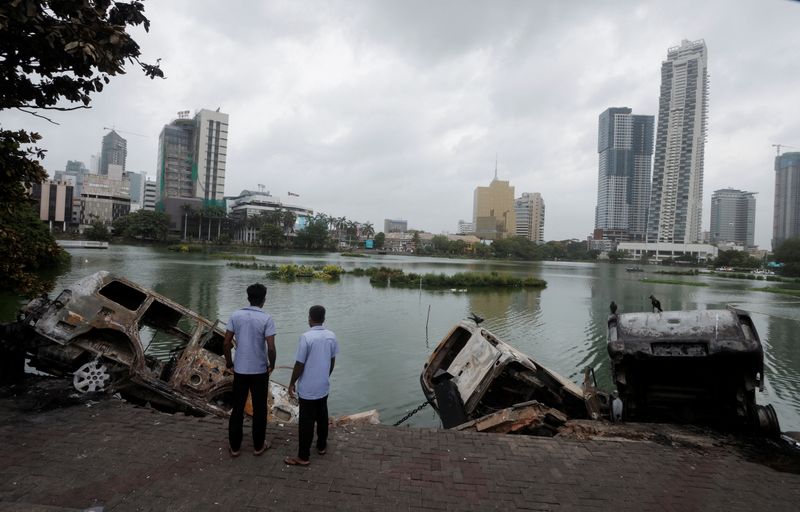