SACRAMENTO, Calif. -In New York, lawmakers have introduced a bill to expand funding for abortion care. California legislators will soon vote on measures aimed at increasing the number of abortion providers. And Connecticut just enacted a law intended to protect providers from lawsuits in states where abortion is banned.

“There is no more critical issue,” said California Senate Leader Toni Atkins, a Democrat who ran reproductive health clinics before entering politics. “I hope it becomes a key issue of importance to everyone.”

The efforts to shore up abortion rights contrast sharply with those in conservative states, where lawmakers are vowing to pursue further restrictions. Abortion will be banned or restricted in an estimated 26 Republican-led states should the Supreme Court reverse federal constitutional protections in a decision expected by the end of June.

As expected, legislation to make abortion legal throughout the United States was defeated in the U.S. Senate on Wednesday. All 50 Republicans and one Democrat, Senator Joe Manchin, voted to block the bill.

At the state level, however, liberal and moderate politicians have succeeded in enacting laws to expand and protect abortion access in anticipation of the court’s ruling.

In Connecticut last week, Democratic Governor Ned Lamont signed a law aimed at protecting providers who perform abortions for patients who travel from states where the procedure has been banned or restricted, as well as the patients themselves.

A constitutional amendment protecting abortion rights will go before Vermont voters in November, and similar constitutional proposals are being considered in Washington state and California.

Some of the most aggressive steps to protect abortion rights have come in New York and California, both Democratic strongholds.

On Monday, Democratic lawmakers in New York announced a bill to set up a program that would fund abortion care not covered by insurance and award grants to groups that help women travel from other states to obtain abortions.

New York Governor Kathy Hochul, a Democrat, on Tuesday directed the state’s Department of Health to create a $25 million fund to support abortion providers. The Division of Criminal Justice would offer another $10 million for security grants for reproductive health centers, she said.

Next week, California’s legislature will hear a slate of abortion bills that include a measure that would protect providers and patients from civil actions and financial retaliation for obtaining a legal procedure in the state.

The legislation also would allow nurse practitioners to perform some abortions, expanding the ranks of providers at a time when thousands of women are expected to travel to California from other states seeking care.

But the actions to increase abortion protections in Democratic-led states have been dwarfed by new restrictions passed in states controlled by Republicans, according to the Guttmacher Institute, an abortion rights advocacy group.

Some conservative lawmakers and anti-abortion activists have said they want to go further – eliminating medication abortions via pills often obtained online, and finding ways to extend abortion bans to states where the procedure remains legal.

Not all Republicans oppose abortion rights. Massachusetts Governor Charlie Baker, a moderate Republican, said last week he was “open” to discussing protections for women who come to his state from others to seek abortions.

Sue Dunlap, president and CEO of Planned Parenthood in Los Angeles, said policymakers need to move beyond broad-brush state laws to consider the details of how women will actually be able to access abortion if they live in states where it is outlawed.

Much of that will come at the local level, she said, as city officials find themselves called upon to provide services such as police protection for patients and providers.

“California and Los Angeles and others across the country have taken very important first steps,” Dunlap said, “but I don’t feel we have really grappled with what is around the corner.” 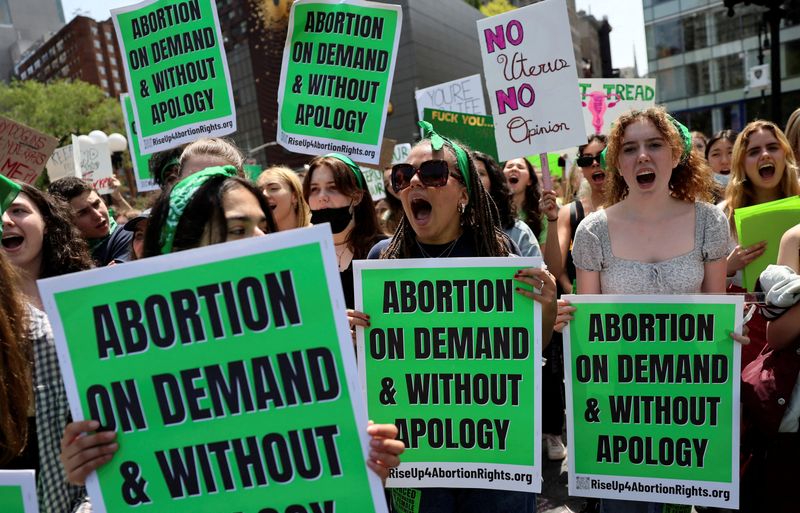