LONDON – Reckitt Benckiser is boosting baby formula production by about 30% and making more frequent deliveries to stores as it looks to counter a nationwide shortage in U.S. supermarkets, an executive told Reuters.

Along with cutting back on some items that take longer to produce, this has allowed the company to make about 30% more baby formula, he said. Reckitt has reduced the time it takes to get product to shelves by nearly half.

Baby formula aisles at supermarkets have been emptied by panicked parents since top U.S. manufacturer Abbott Laboratories in February recalled dozens of types of its Similac, Alimentum and EleCare formulas.

The products, which were made at a plant in Michigan, were recalled after complaints of bacterial infections.

The recall, which exacerbated a shortage of formula that started late last year, has forced supermarkets like Target Corp and Walgreens Boots Alliance to limit sales of formula, putting pressure on the Biden administration to address the crisis.

Prior to the Abbott recall, Reckitt supplied just over a third of the U.S. infant formula market compared with Abbott’s roughly 44%. Britain-based Reckitt told Reuters it now accounts for more than 50% of total baby formula supply in the United States.

“We normally might pack an entire truck before we ship it. For timeliness, we’re not doing that. We’re packing it with as much product as we have and then we’re just getting it out the door,” Cleveland said.

About 40% of baby formula products are out of stock nationwide, data firm Datasembly said last week.

Reckitt is prioritizing states that have higher populations of babies who need its products, and low-income mothers who buy formula that is part of the Women, Infants, and Children Nutrition Program (WIC), he added.

Perrigo Co Plc, which makes store-brand baby formulas for retailers including Walmart Inc and Amazon.com Inc, told Reuters last week it expects shortages and heightened demand to last for the “balance of the year.”

The U.S. Food & Drug Administration (FDA) on Monday outlined a process by which the agency would not object to the importation of certain infant formula products intended for a foreign market.

U.S. President Joe Biden last week met with executives from infant formula manufacturers and retailers, pressing them to do everything possible to get families access amid a nationwide shortage.

“The White House started asking us if they could work on some of the inputs to our manufacturing process,” Cleveland said. Reckitt was at one time struggling to source a plastic mould that helps makes packaging, for instance.

They’ve been “calling some of these input suppliers to emphasize the urgency and the need to resolve this,” he said. 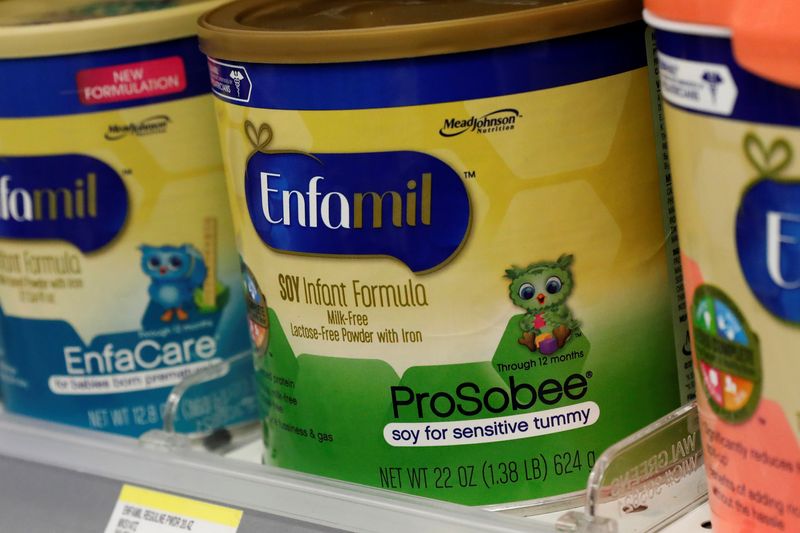