By Nathan Layne and Kia Johnson

County election officials rejected his request, but party organizers expect to be doing more of this kind of quick mobilization as the Nov. 8 midterm elections approach, fearing Republicans will tap provisions in the state’s 2021 election law to try to suppress the vote.

“Because of Georgia’s new trash election laws, one man was allowed to challenge the right to vote for 13,000 voters,” Nsé Ufot, chief executive of the New Georgia Project, a voting-rights group based in Atlanta, said in an interview. “That is what is at stake in these November elections: The material rights that we enjoy as Americans.”

Equal to 8% of the county’s registered voters, it was one of the largest challenges yet under the 2021 state Senate Bill 202, which critics say was designed to make it more difficult for people of color to vote and supporters say is intended to prevent fraud.

Georgia’s law was one of nearly three dozen in 2021 that curbed ballot access across 19 states, most of them controlled by Republicans. That push carried into this year, with legislators in at least 27 states having introduced, pre-filed, or carried over 250 bills with restrictive provisions, according to the Brennan Center for Justice’s latest tally.

Many of the backers of these measures cited former President Donald Trump’s false claims that his 2020 election defeat was the result of widespread voter fraud, claims that multiple courts, state election officials and members of Trump’s own administration have rejected as false.

In addition to giving individual Georgians the power to challenge an unlimited number of voters at once, the state’s law limited the use of dropboxes, narrowed the window for submitting absentee ballots and criminalized a variety of election-related activities, including giving water to voters in line.

Khondoker told the group the new legislation has added a new level of confusion for already overstretched election officials, adding, “That confusion can lead to disenfranchisement.”

The pro-bono lawyers will escalate cases for potential litigation to the Elias Law Group, the Washington-based firm led by prominent Democratic attorney Marc Elias, which authored a letter protesting the voter challenge in Forsyth that was sent to the county’s election board.

“Folks who attempt to go vote this fall are inevitably going to encounter some issues, some by design,” said Michael Jones, one of the firm’s attorneys in Atlanta. “They are going to need help on the ground to navigate those challenges.”

Georgia will be critical to Democrats’ hopes of keeping control of the U.S. Senate, with a November match-up expected between incumbent Democrat Raphael Warnock and Trump-backed former football star Herschel Walker. Since early voting for the primary began on May 2, over 400,000 ballots have been cast, more than three times the level during the same period in 2018.

Of all the new law’s measures, decreased drop box access will likely have the biggest influence on turnout, said Charles Bullock, professor of political science at the University of Georgia, though he reckons the impact will be small.

“It doesn’t look to me that it will be that big of a deal,” Bullock said. “The Democrats will make it an issue and run on it and it’s smart to do that.”

Democrats in neighboring Florida are also assembling a network of hundreds of lawyers to respond to a new law, while incorporating messaging about its various restrictions on ballot access into their get-out-the-vote campaigns, Ben Tyler, general counsel for the state party, told Reuters. Tyler said he is also bracing for partisan challenges allowed by the new law.


In Georgia’s Forsyth County, officials expect more challenges like Schneider’s. Schneider, a resident of the county who could not be reached for comment, created his target list by comparing county voter rolls with a change of address database maintained by the U.S. Postal Service. The county election board decided the data was insufficient and the challenge too close to the primary, but a Republican board appointee, Joel Natt, encouraged Schneider to try again after conducting more research.

“It’s a lot of data and a lot of research that has to be done and if you make a mistake somebody may get mad,” Natt told Reuters. “I encouraged him to bring it back another time when we have more time to digest all this.”

Anita Tucker, a Democratic member of the board, said she was worried the challenges would breed distrust of voting.

“We have been promised more challenges,” Tucker told Reuters. “It is ironic that the justification for the challenges is to create voter confidence.”

Democrats and their allies are also pouring resources into boosting turnout. The New Georgia Project has knocked on 417,000 doors in the past 10 weeks, hoping to get new voters to the polls for the primary, knowing that increases the chances they will cast a ballot in November.

On a hot and sunny afternoon last Thursday, canvasser TunDe Hector appeared to win over a 27-year-old man in a south Atlanta neighborhood who had no plan to vote in the primary. After their conversation, the man, who only gave his first name of Devontae, said there was an 85% chance he would cast a ballot.

“They count on us not being out here,” Hector said. “I’m here to make sure, you know, you don’t want to be scratched off the books because this is important for all of us.” 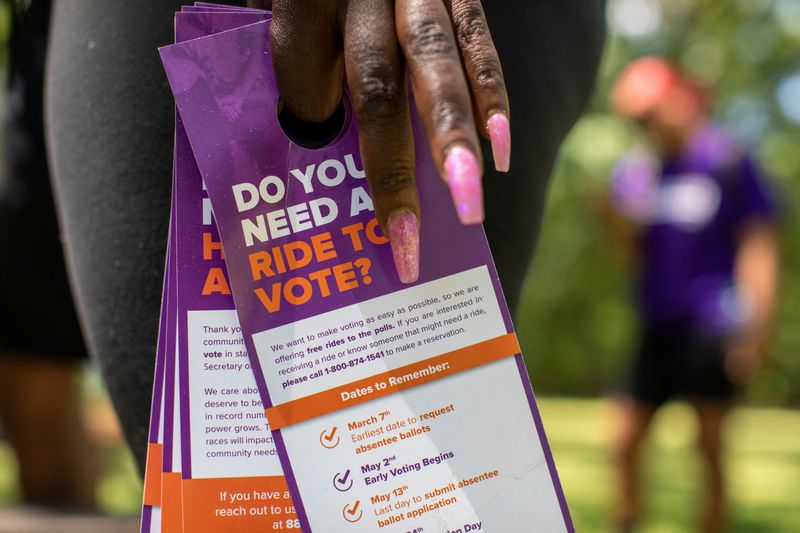 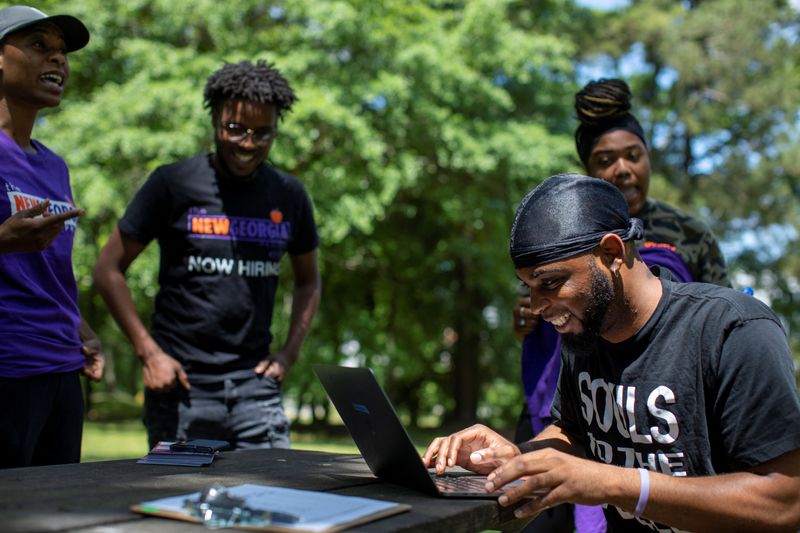 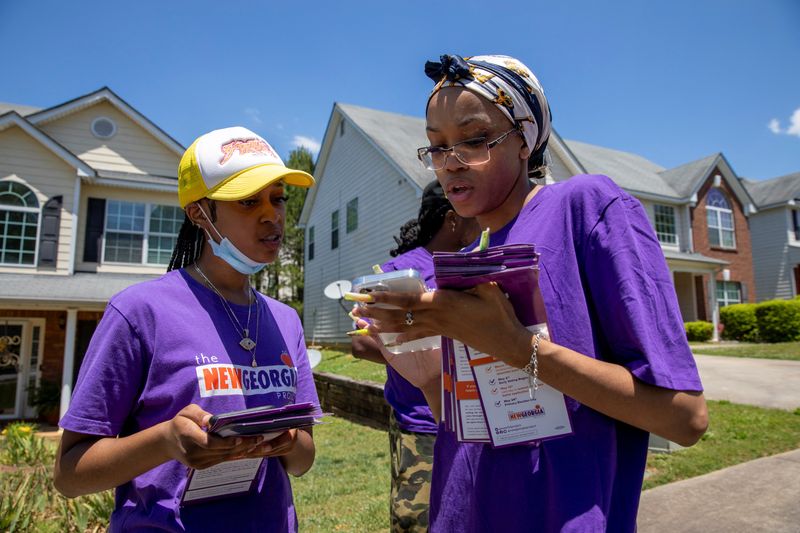 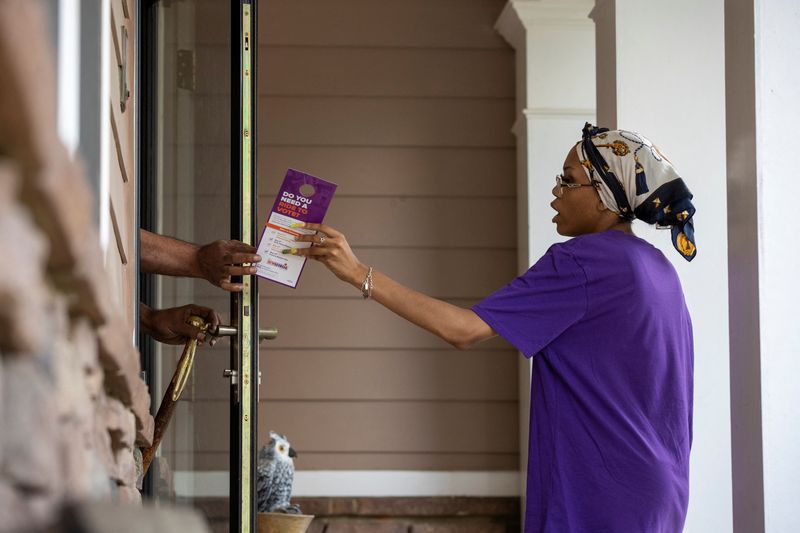 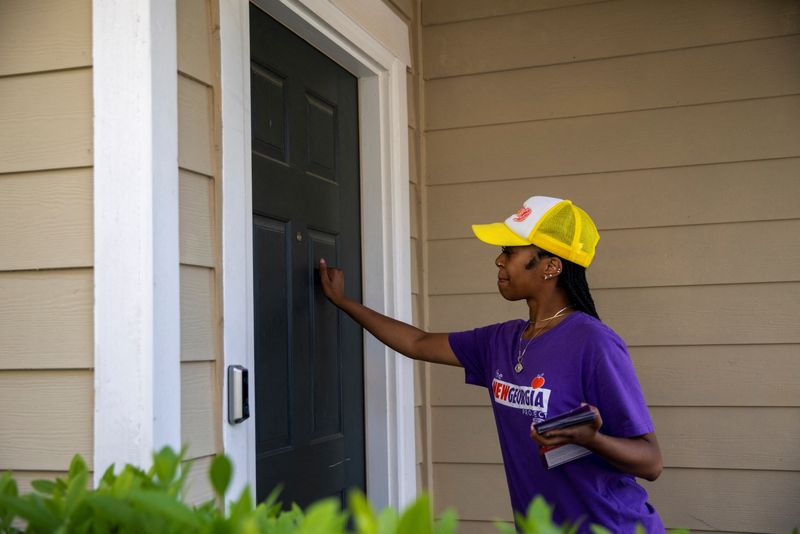