LONDON -Russia said on Monday that it had agreed to evacuate wounded Ukrainian soldiers from the bunkers below the besieged Azovstal steel works in Mariupol to a medical facility in the Russian-controlled town of Novoazovsk.

“An agreement has been reached on the removal of the wounded,” the Moscow defence ministry said in a statement.

“A humanitarian corridor has been opened through which wounded Ukrainian servicemen are being taken to a medical facility in Novoazovsk.”

Ukraine’s Deputy Defence Minister Hanna Malyar told Ukrainian television: “Any information can harm the processes that are taking place … Inasmuch as the process is under way, we can’t say what’s happening right now.”

As Russian forces pummelled Mariupol for nearly two months, some civilians and Ukrainian fighters sought refuge in the Azovstal works – a vast Soviet-era plant founded under Josef Stalin and designed with a labyrinth of bunkers and tunnels to withstand attack.

Most civilians were evacuated from the plant this month after the United Nations and the International Committee of the Red Cross brokered a deal with Russia and Ukraine.

But Ukrainian fighters remain at the plant. Videos and pictures posted online have shown some with serious injuries.

Relatives appealed on Monday to Turkish President Tayyip Erdogan in Istanbul to help extract the defenders.

Natalia Zaritskaya, wife of a member of the Ukrainian Azov Battalion, told reporters: “The ring around Azovstal has tightened. We can’t delay any further. We pin our last hope and believe that through the joint efforts of Turkey, through its President Erdogan, and China, through its President Xi Jinping, and God himself, it is possible to save Azovstal and the people who are there on the cusp of life and death.

“They are in hell. They receive new wounds every day. They are without legs or arms, exhausted, without medicines.”

On Sunday, brightly burning white munitions were seen raining down on the steel works in what a British military expert said looked like an attack with phosphorus or other incendiary weapons.

(Reporting by Reuters; Editing by Kevin Liffey and Hugh Lawson) 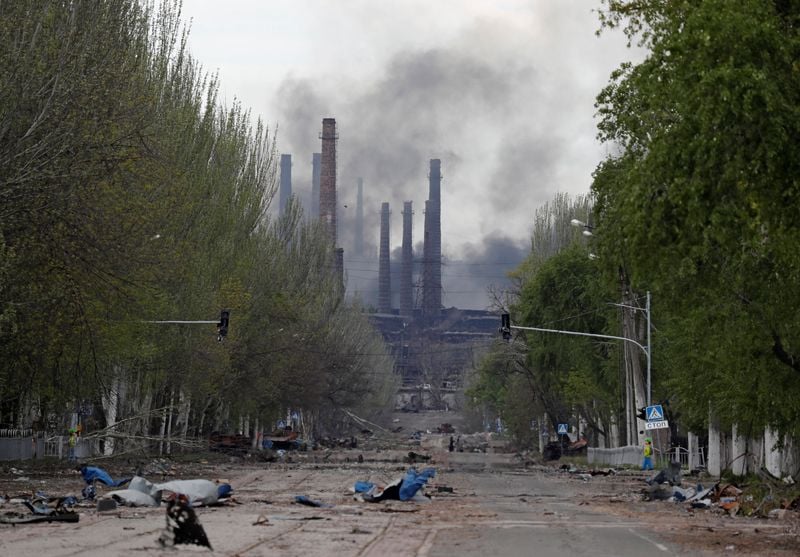