By Daniel Leussink and Tetsushi Kajimoto

The decline presents a challenge for Prime Minister Fumio Kishida’s drive to achieve growth and wealth distribution under his “new capitalism” agenda, stoking fears of stagflation – a mix of tepid growth and rising inflation.

The world’s No. 3 economy fell at an annualised rate of 1.0% in January-March from the previous quarter, gross domestic product (GDP) figures showed, slower than a 1.8% contraction expected by economists. That translated into a quarterly drop of 0.2%, the Cabinet Office data showed, versus market forecasts for a 0.4% drop.

The weak reading may pressure Kishida to release even more stimulus with upper house elections pencilled in for July 10, following the 2.7 trillion yen ($20.86 billion) in extra budget spending compiled on Tuesday.

“The economy will return to growth in the coming quarters but it won’t be a dramatic recovery, leaving the possibility of further spending wide open as elections draw near,” said Hiroshi Shiraishi, senior economist at BNP Paribas Securities.

“The lockdown in China and U.S. rate hikes as well as the Ukraine crisis could weigh on external demand. Declines in household and corporate real income due to worsening terms of trade may hamper recovery in domestic demand.”

Private consumption, which makes up more than half of the economy, was little changed, the data showed, better than a 0.5% fall expected by economists but below the upwardly revised 2.5% growth seen in the December quarter.

However, doubts remain over whether the recovery will be V-shaped, with surging energy and food prices boosted capping consumption.

Adding to the gloom, business optimism among Japan’s manufacturers hit a more than one-year low as firms struggled with rising import costs due to a weak yen and higher raw material prices, the Reuters Tankan poll showed.

The weak yen and surging global commodity prices helped imports of goods and services including cellphone and medicine grow 3.4%, overwhelming export growth of 1.1%.

Capital spending rose 0.5% versus an expected 0.7% increase and following a 0.4% rise in the previous quarter, driven by general-purpose machinery and research and development payments. That helped domestic demand contribute 0.2 of a percentage point to GDP growth.

For the whole of fiscal 2021 to March, the economy grew 2.1%, posting the first gain in three years.

Economy minister Daishiro Yamagiwa said the economy has not returned to pre-pandemic levels but that further downside would likely be limited.

“We expect GDP growth to disappoint across 2022 due to the hit to household income from higher inflation and signs that elderly consumers remain wary of catching the virus,” Tom Learmouth, Japan economist at Capital Economics, wrote in a note. 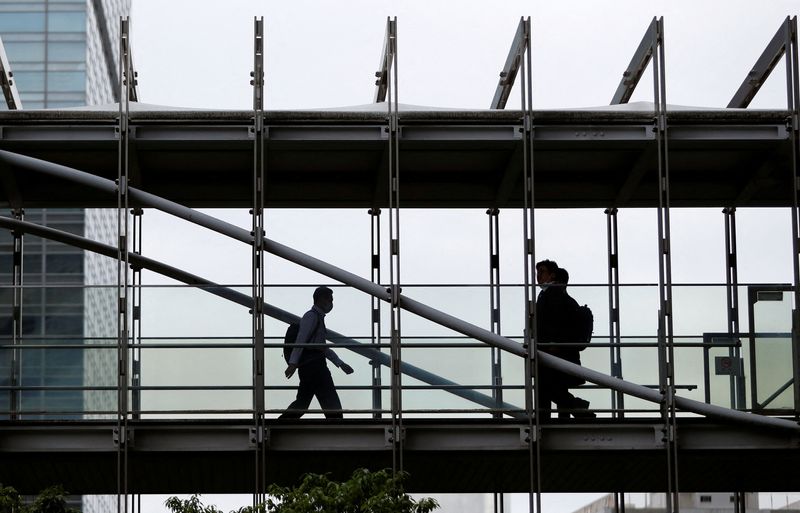