BRUSSELS (Reuters) -U.S. Treasury Secretary Janet Yellen called for U.S. allies to step up financial support for Ukraine on Tuesday, saying that funds announced so far would not be sufficient for the country’s short-term needs as it battles a Russian invasion.

“Ukraine’s financing needs are significant,” Yellen said in a speech to the Brussels Economic Forum, adding that the country’s government continued to function, due to the ingenuity and bravery of its officials.

“In the months until tax collection can resume at pace, Ukraine needs budget funding to pay soldiers, employees and pensioners, as well as to operate an economy that meets its citizens’ basic needs,” Yellen said. “In short order, it will need to turn to repairing and restoring critical utilities and services.”

While Ukraine would eventually need “massive support” for reconstruction and recovery on the scale of the post-World War Two Marshall Plan for Europe, the country would have to take this “one step at a time.”

“What is clear is that the bilateral and multilateral support announced so far will not be sufficient to meet Ukraine’s basic needs,” Yellen said.

With the war shuttering as much as half of Ukraine’s economy, the country requires near-term external financing of about $5 billion per month to meet basic needs, according to Ukrainian President Volodymyr Zelenskiy and the International Monetary Fund..

The European Union on Wednesday is set to propose a new package of loans to Ukraine to provide immediate liquidity, along with commitments for longer-term reconstruction. While the short-term package is still being defined, two officials familiar with the discussions told Reuters they expected it to roughly cover Ukraine’s financial needs for two months.

Yellen called on allies to “join us in increasing their financial support to Ukraine” as the U.S. Senate moved closer to passing a $40 billion spending package of military and humanitarian aid for the war-torn country..


Yellen later told reporters that she believed that EU officials were committed to providing a significant contribution to Ukraine’s financial needs but was looking to G7 countries Japan, Britain and Canada to step up as well. [B5N2RI01J]

Yellen also said more work was needed to bring a global deal to reform corporate taxes over the finish line. That would include resolving disagreements over the design of the “Pillar 1” plan to reallocate some taxing rights on large, highly profitable multinationals to “market countries” where their services and products are sold.

The treasury secretary on Monday achieved no breakthroughs in persuading Polish officials to adopt the EU implementation plan for the “Pillar 2” 15% global minimum corporate tax, but pledged to keep working on the issue.

“And on Pillar 2, the EU and the United States must show leadership by expeditiously implementing the global minimum tax in our domestic laws,” Yellen said.

She also said the United States was committed to helping to meet European energy needs as Europe tried to break its dependence on Russian oil and gas.

She called on Europe, the United States and other allies to also band together to reduce their dependence on China for critical materials such as rare-earth metals and to diversify supply chains.

Yellen said that with Russian energy less available due to embargoes or supply cuts, there would likely be a near-term uptick in usage of coal and other fossil fuels. “And if this blunts some of our immediate climate goals for a short period, let it also prod us to redouble our efforts on clean and renewable energy.” 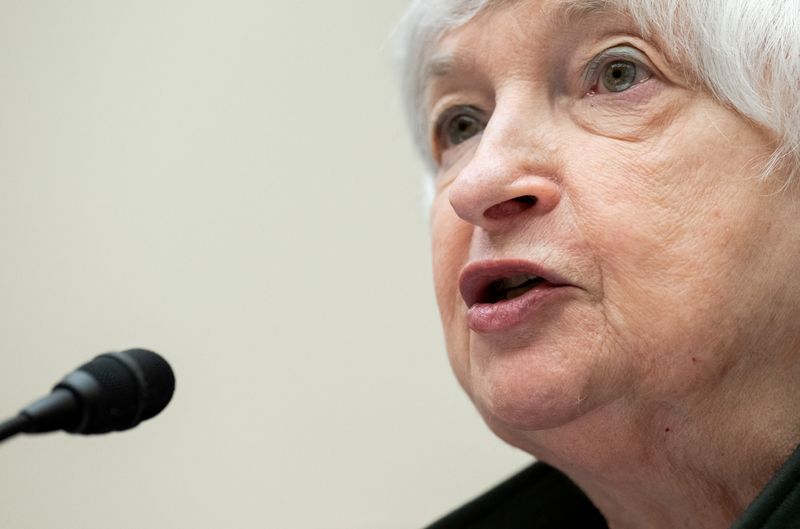