Much of this is beyond the control of any government, but the winners will still be under pressure to ease the cost-of-living crisis without stimulating yet more inflation.

They will also take the blame should rates have to rise so fast that they tip the economy into recession, even if that is really the responsibility of the independent central bank.

So far, the centre-left Labor opposition looks set to end the nine-year reign of the conservative Liberal National government at the May 21 vote, although a hung parliament also looms as a possibility.

Labor has pledged to tackle the rising cost of living by supporting commensurate wages gains, putting pressure on Prime Minister Scott Morrison who could only promise that wages would eventually increase as unemployment came down.

His argument took a body blow this week when official wage data showed annual growth of just 2.4%, less than half the 5.1% pace of consumer price inflation.

Labor jumped on the figures to claim ordinary Australians were going backwards in real wages, and that at a time when the Reserve Bank of Australia (RBA) was raising borrowing costs.

The RBA underlined its determination to beat inflation by lifting interest rates at a May 3 policy meeting, the first hike in 11 years and a rare step during an election campaign.

Financial markets are wagering it will have to hike every month for the rest of the year, taking rates from the current lowly 0.35% to as high as 2.75% by Christmas.

If right, that would be one of the most drastic tightening campaigns in modern history and a major burden for households that owe a record A$2 trillion ($1.4 trillion) in mortgage debt.

It would add more than A$700 a month to an average repayment at a time when inflation is already at a two-decade peak of 5.1% and likely to reach 6% by the end of the year.

Just the prospect of rate rises has cast a pall over the national mood. A respected survey of consumers from Westpac this month showed sentiment cratered at lows last seen in August 2020 when the coronavirus pandemic was locking down Melbourne.

“The Australian household sector is one of the most indebted in the world, so they are more sensitive to changes in interest rates than at any other time,” warns Gareth Aird, chief economist at the nation’s biggest mortgage lender CBA.

“This elevated level of household indebtedness means that the RBA must thread the rate hike needle carefully.”

Adding insult to injury, rising borrowing costs also threaten to upend the housing market which boasted its strongest year ever in 2021 as values surged 25% across the nation.

Prices have already started to slip in Sydney and Melbourne and the RBA itself has estimated values could fall by 10-15% should mortgage rates rise by 200 basis points.

The public sector has debt problems of its own having run up record budget deficits through the pandemic and a gross debt pile of A$900 billion.

Another A$185 billion of red ink is projected out to June 2025, when the term of the new government ends, and it will all carry higher borrowing costs as bond yields soar.

A year ago the government could borrow for three years at zero percent. It now costs around 3%.

Yet both major parties have committed to more spending, not less, and to radical cuts in income taxes due from mid-2024 that are estimated to cost A$184 billion by 2031.

Many economists argue this simply cannot be afforded given added spending on health, defence and climate change mitigation. How the winner this weekend settles this vexed issue, could well decide the next election. 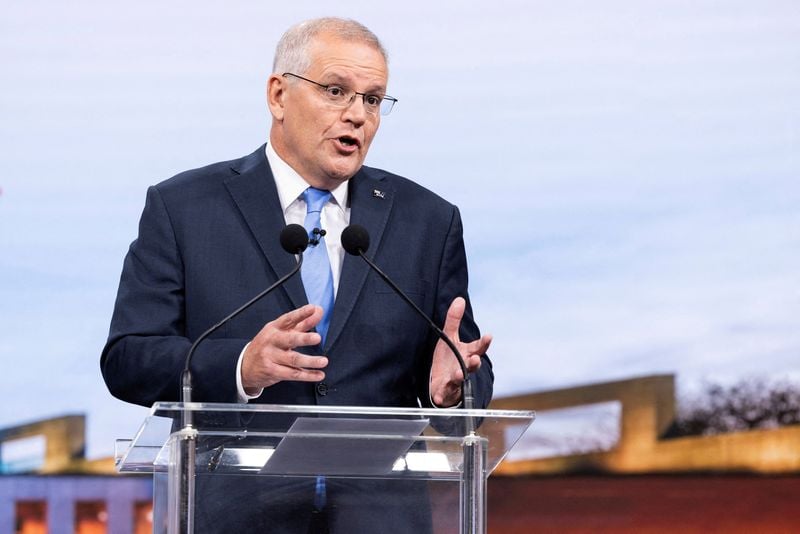