JAKARTA – Indonesia’s trade minister on Wednesday said he expected prices of cooking oil would stabilise after a programme to distribute subsidised supplies reaches 10,000 locations across the country.

The trade ministry and state food company ID Food on Tuesday launched a scheme that allows low-income households to buy up to two litres of cooking oil a day at 14,000 rupiah ($0.95) per litre. The programme had reached 1,200 locations as of Wednesday and was expected to reach 2,500 by the end of the week, Trade Minister Muhammad Lutfi told reporters.

Indonesia halted exports of crude palm oil and its derivatives on April 28 in the hopes that flushing the domestic market with the staple food product would arrest soaring cooking oil costs, but prices have remained stubbornly high.

Affordable cooking oil at home would be a prerequisite for any talks of easing the export ban, Lufti said.

“Hopefully, by reaching 10,000 locations across the country at the earliest opportunity we can stabilise (cooking oil) affordability and availability all over Indonesia,” Lutfi said, adding that that many locations would represent around 60% to 70% of the Indonesian market.

“We hope we can reach stability at the earliest opportunity and only then we can talk about export relaxation,” he added.

Government officials have said the palm export ban would be lifted if price of bulk cooking oil has dropped to 14,000 rupiah per litre nationally. As of Tuesday, the average price was 17,200 per litre, ministry data showed.

Indonesia is the largest palm oil exporter and its decision to stop exports has shocked global vegetable oil markets that had already seen a big chunk of sunflower oil supply removed due to the war in Ukraine.

On Tuesday, hundreds of palm oil farmers staged a rally in capital Jakarta demanding the removal of the export stoppage as storage at mills were filling up and refiners began to stop buying palm fruits. 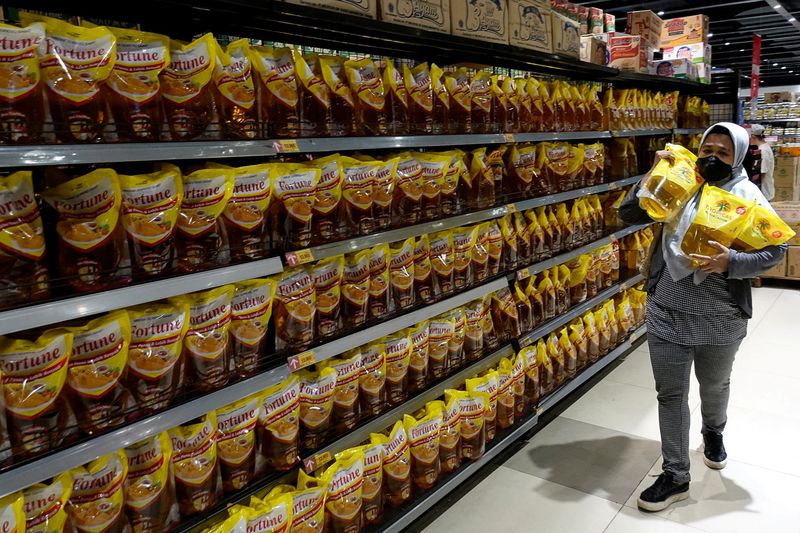