By Tetsushi Kajimoto and Daniel Leussink

TOKYO – Japan’s exports extended double-digit gains for a third straight month in April, but surging global commodity costs inflated the country’s import bill to a record, adding to worries about the rising cost of living.

Shoring up the prospects of a private demand-led recovery, however, was a gauge of capital expenditure that posted its first monthly gain in three months.

The mixed data on Thursday followed the yen’s falls to two-decade-lows against the dollar earlier this month, which stoked fears of worsening terms of trade and added financial burdens for the resource-poor Japanese economy as import costs soar.

A weak yen, once considered a boon for the export-led economy, now has less of an impact as shipments grow smaller due to the ongoing shift by Japanese manufacturers to offshore production.

Japan’s exports rose 12.5% in April from a year earlier, Ministry of Finance data showed, led by U.S.-bound shipments of cars, slightly missing a 13.8% increase expected by economists in a Reuters poll. It followed a 14.7% rise in March.

In a worrying sign for the outlook, China-bound shipments fell 5.9% in April, the biggest drop since March 2020, as heavy COVID-19 curbs in major cities like Shanghai disrupted supply-chains and paralysed economic activity. Imports from China — Japan’s largest trading partner — also fell the most since September 2020, the data showed.

“As such, Japan’s economic recovery depends on coronavirus developments at home and China as the lockdown in Shanghai has disrupted supply-side and consumer activity.”

Imports rose 28.2% in the year to April, versus the median estimate for a 35.0% increase, as the weaker yen lifted already surging global commodity prices. Imports hit a record 8.9 trillion yen ($69.27 billion), topping exports worth 8 trillion yen.

That resulted in a trade deficit of 839.2 billion yen, narrower than the median estimate for a 1.150 trillion yen shortfall but posting a ninth straight month in the red.

Analysts have warned of risks of prolonged cost-push inflation to the fragile economy with external factors, not domestic demand, pushing import bills higher.

“If the zero-COVID policies are extended it will have a really harsh impact,” said Taro Saito, executive research fellow at NLI Research Institute, adding that China-bound shipments account for more than a fifth of Japan’s exports.

Separate data on Thursday showed Japan’s core machinery orders rose 7.1% in March from the previous month, versus a 3.7% increase expected by economists in a Reuters poll.

The volatile data series, regarded as a leading gauge of capital expenditure in the coming six to nine months, provided a glimmer of hope for a domestic demand-led recovery. 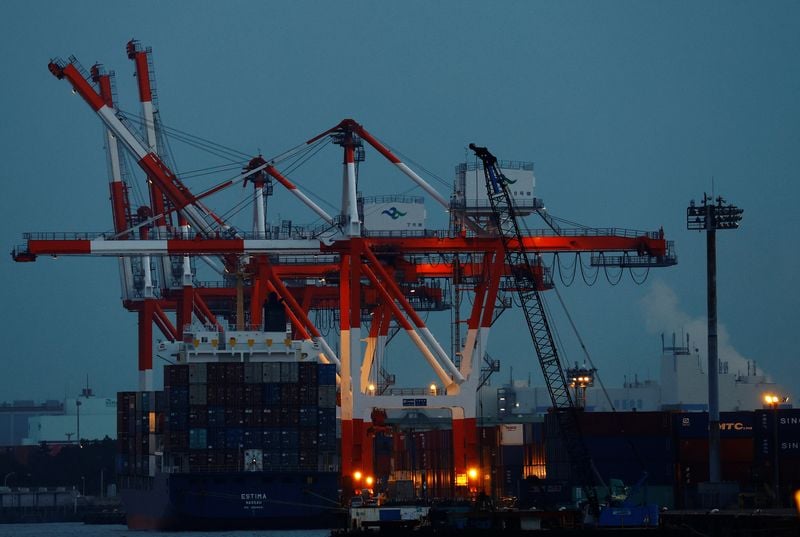