WASHINGTON/SEOUL -U.S intelligence shows there could be a North Korean nuclear test, or a long-range missile test, or both, before, during or after President Joe Biden’s trip to South Korea and Japan starting this week, the U.S. national security adviser Jake Sullivan, said on Wednesday.

The White House said Biden would not visit the Demilitarized Zone (DMZ) that divides North and South Korea during his visit to South Korea, which begins on Friday, having said last week he was considering such a trip.

“Our intelligence does reflect a genuine possibility that there will be either a further missile test, including long-range missile test, or a nuclear test, or frankly both, in the days leading into, on, or after the president’s trip to the region,” Sullivan told a White House briefing.

“We are preparing for all contingencies,” he said.

Sullivan said the United States was coordinating closely with South Korea and Japan and he had also discussed North Korea with his Chinese counterpart Yang Jiechi in a phone call on Wednesday.

Biden’s May 20-24 trip will be his first to Asia as president. It will include his first summit with South Korean President Yoon Suk-yeol, who took office on May 10 and has vowed a harder line against North Korean “provocations.”

Sullivan said the United States was prepared to make both short- and longer-term adjustments to its military posture as necessary “to ensure that we are providing both defense and deterrence to our allies in the region and that we’re responding to any North Korean provocation.”

Earlier, U.S. and South Korean officials said North Korea appeared to be preparing to test an intercontinental ballistic missile (ICBM) ahead of Biden’s trip to South Korea, even as it battled a big COVID-19 outbreak.

South Korean Deputy National Security Adviser Kim Tae-hyo said such a test appeared imminent and a U.S. official said it could happen as soon as Thursday or Friday.

Kim Tae-hyo said a “Plan B” had been prepared in the event of a small or large North Korean “provocation,” which could involve altering the summit schedule.

A weapons test could overshadow Biden’s broader trip focus on China, trade, and other regional issues, and underscore the lack of progress in denuclearization talks with North Korea, despite his administration’s vow to break the stalemate with practical approaches.

North Korea has conducted repeated missile tests since Biden took office last year and this year resumed launches of ICBMs for the first time since 2017. After each launch, Washington has urged North Korea to return to dialogue, but to no response.

Related News:   Montana Gov Tells Tucker Carlson He Wasn’t Briefed On Chinese Spy Balloon Until It Was ‘Hundreds Of Miles’ Into His State

Analysts say that while China’s view on sanctions might alter with another nuclear test, Russian support appeared unlikely after the campaign of U.S.-led sanctions over Moscow’s Ukraine intervention.

Yoon is expected to seek greater assurances from Biden that Washington will strengthen “extended deterrence” against North Korea – a reference to the U.S. nuclear weapons umbrella protecting its allies.

Yoon’s administration has asked Washington to station more nuclear-capable “strategic assets,” such as long-range bombers, submarines, and aircraft carriers in the region.

Kim said the chances of North Korea conducting a nuclear test this weekend appeared low, but if it staged any major provocation, such assets were ready to be mobilised.

A nuclear test could complicate international efforts to offer Pyongyang help to deal with its COVID crisis.

Yoon has offered to help North Korea with this issue, and analysts expect Biden to endorse this effort, even though his administration has said it has no plans to send vaccines directly to North Korea and Pyongyang has persistently refused help though the global vaccine initiative.

The rising case load and a lack of modern care for COVID-19 in North Korea worries World Health Organization officials that an unchecked spread could give rise to deadlier new variants.

North Korea sent aircraft to China to pick up medical supplies days after it confirmed the outbreak, media reported on Tuesday.

He has since said he is no longer bound by that moratorium because of a lack of progress in talks with the United States. While North Korea has resumed ICBM testing, it has not tested a nuclear bomb since 2017.

North Korea has also resumed construction at a long-dormant nuclear reactor that would increase its production of plutonium for nuclear weapons by a factor of 10, researchers at the U.S.-based James Martin Center for Nonproliferation Studies reported last week, citing satellite imagery.

(Reporting by Idrees Ali in Washington and Josh Smith in Seoul; Additional reporting by Soo-hyang Choi in Seoul and David Brunnstrom, Alexandra Alper and Trevor Hunnicutt in Washington; Editing by Gerry Doyle and Sandra Maler) 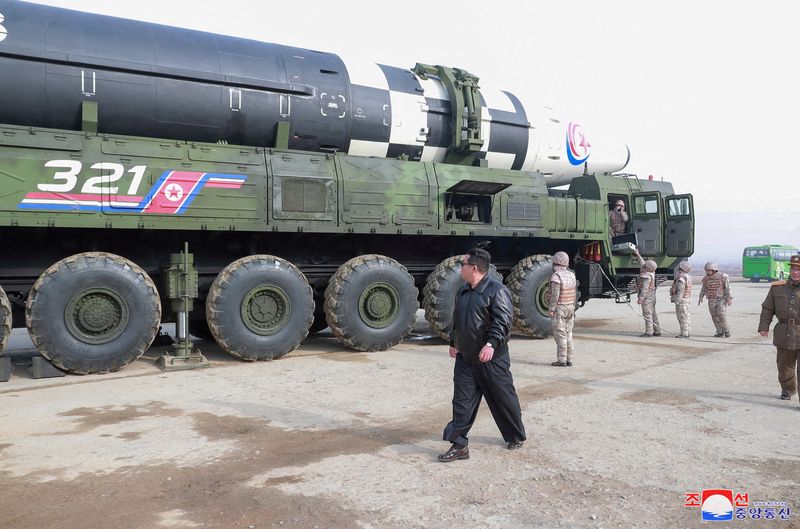