By Steve Holland and Jeff Mason

WASHINGTON (Reuters) -President Joe Biden met with the leaders of Finland and Sweden at the White House on Thursday to offer robust U.S. support for their applications to join NATO, while Turkey threatened to block the Nordic nations from becoming members of the alliance.

Biden, who has rallied the West to stand up to Russia after its invasion of Ukraine, joined Swedish Prime Minister Magdalena Andersson and Finnish President Sauli Niinistö in a sunny White House Rose Garden bedecked with their countries’ flags in a show of unity and support.

Biden said his administration was submitting paperwork to the U.S. Congress for speedy approval once NATO members gave the two countries a green light.

“They meet every NATO requirement and then some,” the president said. “Having two new NATO members in the high north will enhance the security of our alliance and deepen our security cooperation across the board.”

Turkey has expressed strong opposition to the Nordic countries’ ascension, pressing Sweden to halt support for Kurdish militants it considers part of a terrorist group and both to lift their bans on some arms sales to Turkey.

All 30 NATO members need to approve any new entrant. Turkish President Tayyip Erdogan said in a video posted on Twitter on Thursday that Turkey had told allies it will reject Sweden and Finland’s membership.

U.S. National Security Advisor Jake Sullivan, speaking to reporters on Air Force One en route to Asia, said the leaders of Sweden and Finland indicated they were planning to speak directly to Erdogan and that Washington was prepared to support that process.


“We believe that the Turkish concerns about the accession of Sweden and Finland that have been expressed by President Erdogan and others can be addressed and can be resolved,” Sullivan said.

Asked if there were any plans for Biden to engage directly with Erdogan on the issue, Sullivan said: “Not at the moment.”

The Finnish president said at the White House that his country was open to discussing all Turkey’s concerns, and pledged to “commit to Turkey’s security just as Turkey will commit to our security” as a NATO ally.

Sweden and Finland have for decades stood outside the Cold War era military alliance designed to deter threats from the Soviet Union, but Russia’s invasion of Ukraine has heightened security concerns.

The situation in Ukraine “reminds us of the darkest days of European history,” Andersson said. “During dark times it is great to be among close friends.”

Conversations between Sweden, Finland and Turkey have taken place to address Ankara’s concerns, with the United States involved in the effort. U.S. national security adviser Jake Sullivan told reporters on Wednesday that U.S. officials were confident Turkey’s concerns can be addressed, and Biden told reporters “I think we’re going to be okay” on the issue.

Biden’s unabashed support put a firm, deliberate U.S. stamp of approval on Finland and Sweden’s applications. He squeezed in the meeting just before departing to Asia and gave both leaders speaking time in the Rose Garden, underscoring that support.

Biden’s remarks also sent a signal to Russian President Vladimir Putin. On Monday Putin said there was no threat to Russia if Sweden and Finland joined NATO but cautioned that Moscow would respond if the alliance bolstered military infrastructure in the new Nordic members.


Biden said on Thursday that new members joining NATO is not a threat to any nation. “It never has been,” he said. 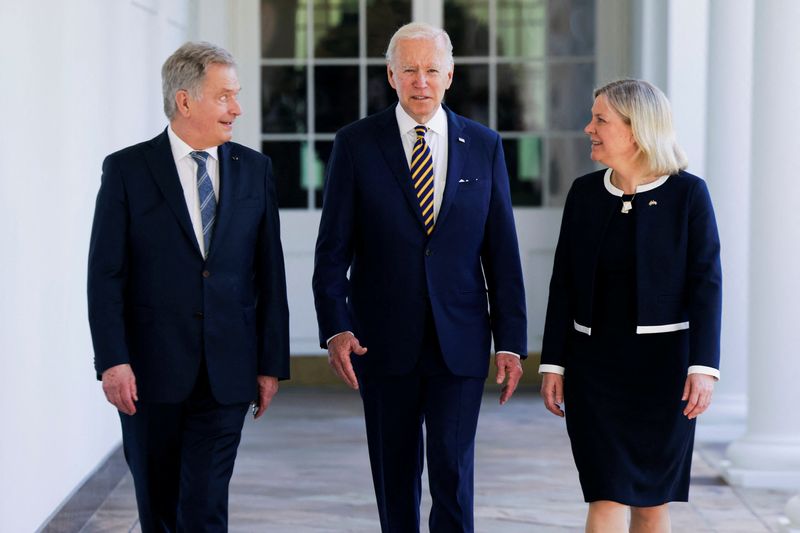 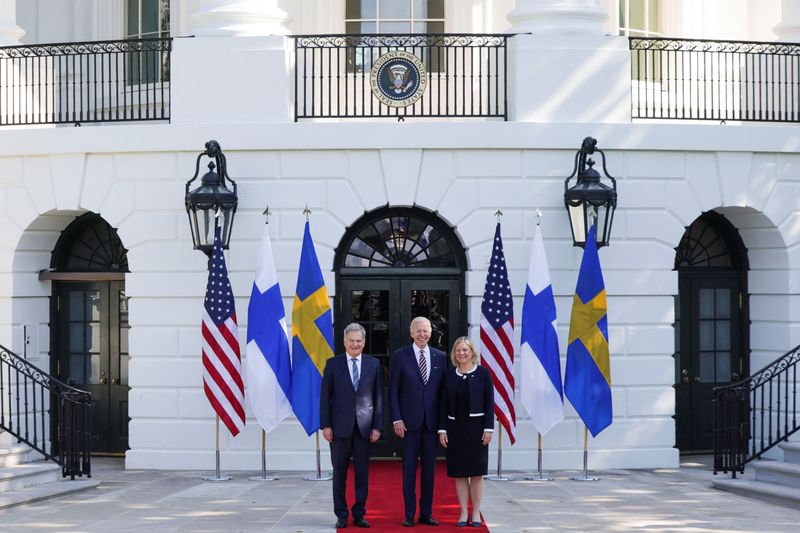 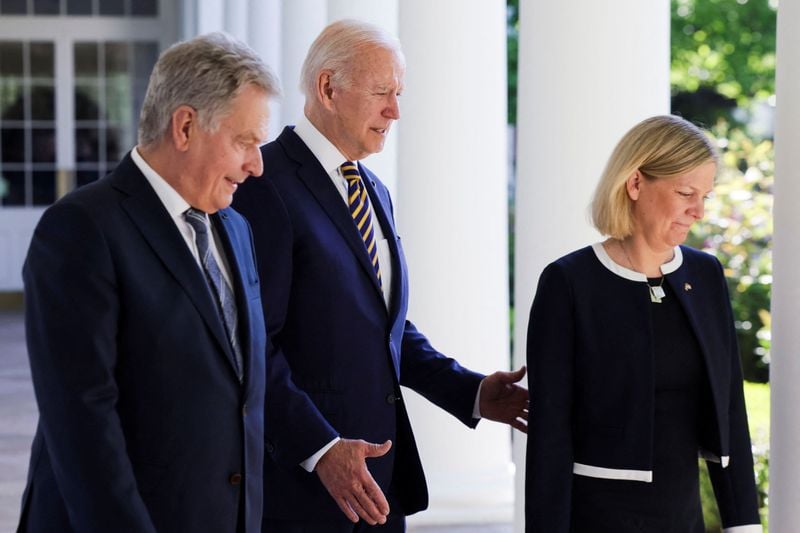 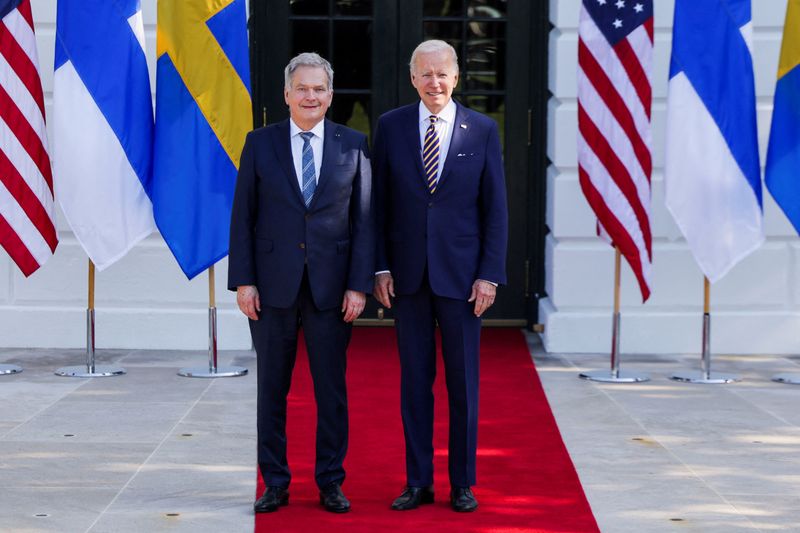 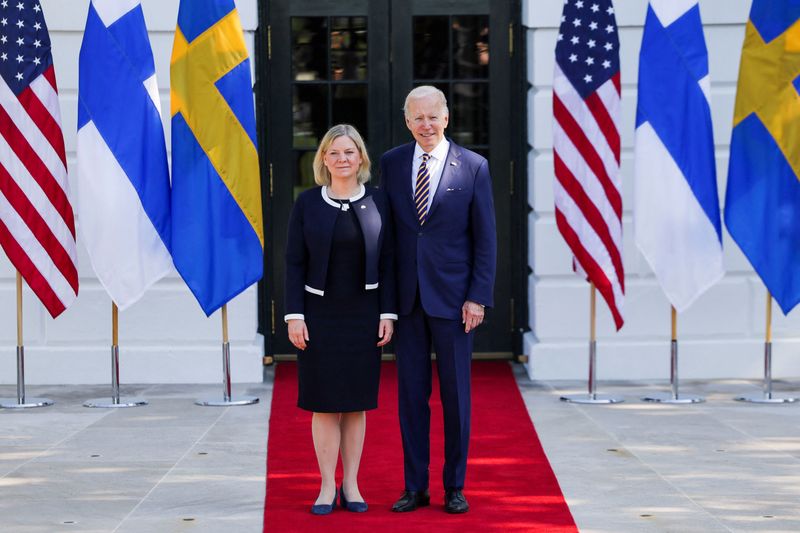