Tracking U.S. peers, European retailers fell nearly 2% and were the biggest drags on the pan-European STOXX 600 index, which extended declines after a 1% slide on Wednesday.

Losses were broad based, with all major sub-sectors trading in the red.

U.S. stock futures pointed to a fresh sell-off after Target Corp’s quarterly profit halved and Walmart cut its profit view as they struggle with rising fuel and freight costs, while consumers shift their spending away from big-ticket purchases to essentials.

European retailers such as Tesco and Sainsbury had also warned last month of a hit to full-year profits from rising prices.

Nestle, Tesco, Diageo and Unilever fell between 4.5% and 5.5% on Thursday.

“The fact that earnings are being compressed for mid-to-lower tier consumers just tells you inflation is having an impact … on Europe probably more so than the U.S. because wage expectations are not as good,” said Sebastien Galy, senior macro strategist at Nordea Asset Management.

“It’s reviving the stories of stagflation, particularly so in the euro zone.”


Along with the ongoing stimulus reduction by central banks and concerns about the fallout from the Ukraine war, investors fled to the safety of bonds. [MKTS/GLOB][US/] [GVD/EUR]

“The end of earnings season might provide some brief respite from all the negativity, but with more high inflation readings and interest rate hikes to come stocks are going to suffer a lot more bad news,” said Chris Beauchamp, chief market analyst at online trading platform IG.

The STOXX 600 is down 12% for the year as China’s COVID-19 worries added to global recession fears. But as cases drop, hopes of recovery have offered some respite to investors.

Among other stocks, HomeServe rallied 10.2% after Canada’s Brookfield Asset Management said it had agreed to buy the British home repair services firm for 4.08 billion pounds ($5.04 billion).

First-quarter earnings for companies listed on STOXX 600 are expected to increase 41.5% from a year ago, according to Refinitiv data. As of Tuesday, 68.4% of results from companies had exceeded market expectations. In a typical quarter 52% beat profit estimates. 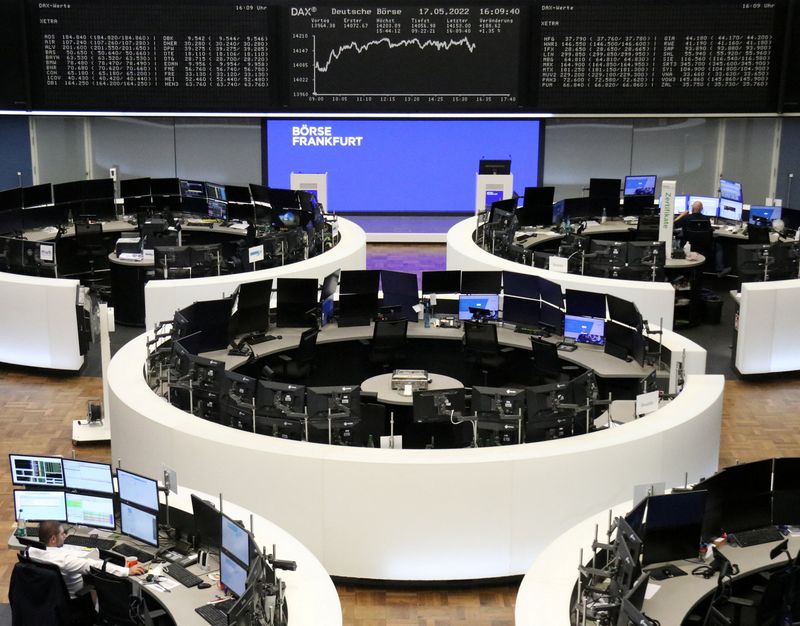