(Reuters) – The Russian rouble firmed past 62 against the dollar on Thursday, propped up by capital controls as well as looming tax payments that usually require extra conversion of foreign currency to roubles to meet local liabilities.

The rouble has become the best-performing currency this year despite a full-scale economic crisis, artificially supported by controls that Russia imposed in late February to shield its financial sector after it sent tens of thousands of troops into Ukraine.

Against the euro, the rouble firmed more than 3% to 64.46 after a fleeting move to 61.1075 at the market opening, which was likely caused by a trading error and became the rouble’s strongest point since April 2017.

“Given that commodity prices remain high, the rouble firming could continue to 60 (to the dollar) and maybe further by the end of the second quarter,” said Anton Strouchenevsky, chief economist at SberCIB Investment Research.

The rouble is steered by the requirement for export-focused companies to convert 80% of their revenues, while demand for dollars and euros is limited by capital controls and a drop in imports due to disrupted logistics in the aftermath of sanctions.

On the bond market, yields on 10-year OFZ treasury bonds inched lower to 10.24% from levels around 10.30% seen earlier this week.

Yields, which move inversely with bond prices, are expected to go further down as the central bank is set to cut its key rate this year to prop up the economy and as inflation slows thanks to the firming rouble.

The central bank is likely to cut its key rate by 100-200 basis points from 14% at its next board meeting in June, said Dmitry Polevoy, head of investment at LockoInvest.

For the first time in many weeks, annual inflation slowed, to 17.69% as of May 13 from 17.77% a week earlier, while the weekly inflation reading slipped to 0.12%, well below the 2.22% reading seen in early March days after Russia started what it calls “a special military operation” in Ukraine.

(Reporting by Reuters; Editing by Nick Macfie and Bernadette Baum) 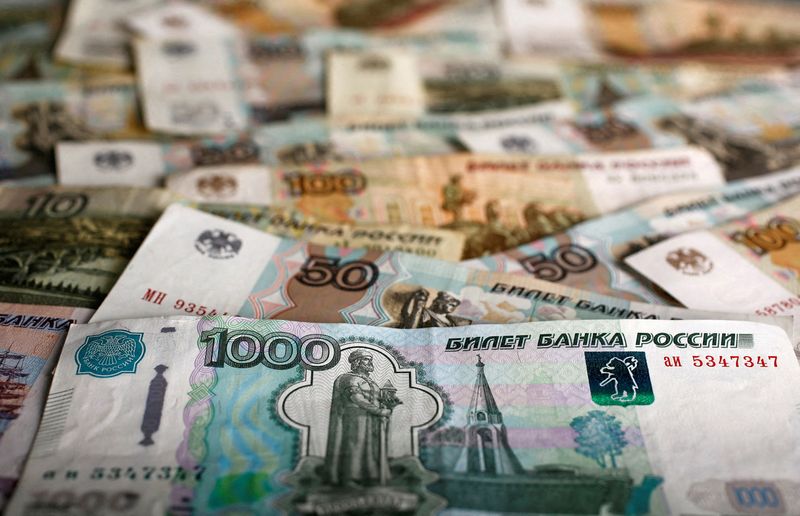