ATLANTA/ SAN FRANCISCO (Reuters) -U.S. central bankers broadly back two more big interest rate hikes in June and July, but what happens after is a matter of intense internal debate that turns in large part on differing views of how price pressures will play out in months ahead.

To Atlanta Fed President Raphael Bostic, once the Federal Reserve has delivered half-of-a-percentage point rate hikes as Chair Jerome Powell has signaled, “a pause in September might make sense.”

“I think a lot of it will depend on the ground dynamics that we are starting to see” both of the inflation the Fed is trying to contain and the impact of higher interest rates on the economy, he told the Rotary Club of Atlanta on Monday.

While there is a risk the central bank may have to be more aggressive, he said, “I’m an optimist and I’m assuming inflation will have started to definitively move” lower by then.

Speaking later in the day at a separate event, Kansas City Fed President Esther George painted a more murky picture, enumerating the many factors like Russia’s war in Ukraine and China’s COVID-19 lockdowns that could play out to either intensify or relieve inflation pressures.

Added to that, she said, are the many ways the pandemic has changed the U.S. economy, resulting in labor supply that’s much more constrained than had been appreciated and a service economy that has had difficulty adding back capacity after massive cuts early on in the crisis.

And she noted the “wildcard” effect of an estimated trillions of dollars of excess household savings that could make the Fed’s “job of cooling off demand more challenging.”

Complicating matters, the Fed will start reducing its $9 trillion balance sheet next month, adding to policy tightening against a market backdrop that is much more volatile now than the last time the Fed shrank its bond portfolio.


“The road ahead could be bumpy,” she said.

The challenge for the Fed is to tighten policy enough to curb inflation that has raced to a 40-year-high, but not so much it throws the economy into recession.

Both policymakers nodded to the tricky task ahead, as concerns mount about a global growth slowdown and about how resilient the U.S. economy will be to rising rates and falling equity values, among other adjustments.

Investors expect the Fed to continue raising rates through this year, putting the federal funds rate in a range between 2.75 and 3% by year’s end.

Some of their colleagues have called for an aggressive push to get the policy rate to 3.5% by year’s end, which would involve half-point increases at all the Fed’s remaining meetings.

Others say they expect the Fed to downshift to a smaller rate hikes after July.

The economy’s response to higher rates “is going to accelerate over the next several months,” Bostic said. “If we’re not on it, there’s a risk that we will keep moving beyond the point where these markets have found the equilibrium.”

George did not lay out a specific rate-hike-path preference. 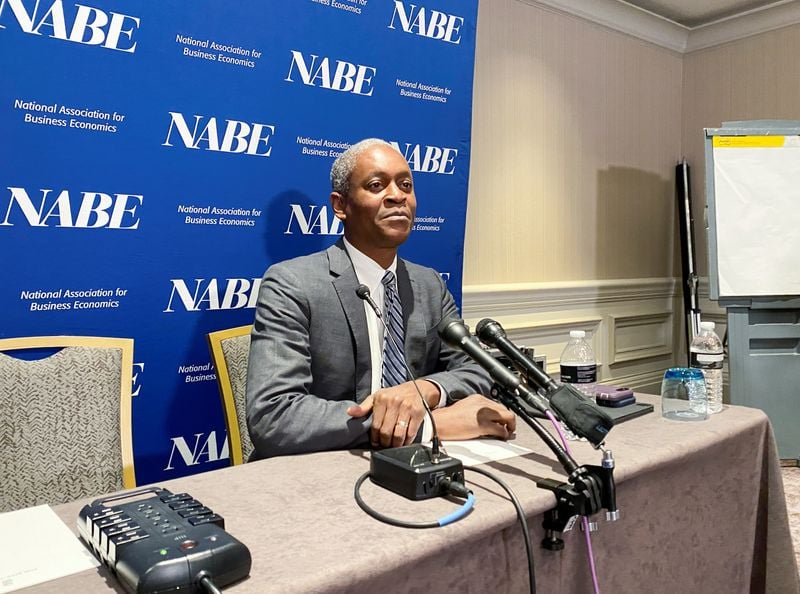