KENNESAW, Ga. (Reuters) – Former Vice President Mike Pence campaigned for one of his ex-boss’ nemeses on Monday night in the Republican primary for governor of Georgia, urging voters not to dwell on the past.

Ahead of Tuesday’s voting, Pence did not directly criticize former President Donald Trump in a speech on behalf of incumbent Brian Kemp nor name David Perdue, the former senator whom Trump has backed in the race.

“Elections are about the future. There are those who want to make this election about the past,” Pence said, speaking in an airport hangar to a crowd of several dozens. “When you say yes to Governor Brian Kemp tomorrow, you will send a deafening message all across America that the Republican Party is the party of the future.”

Kemp did not comply with Trump’s demand he overturn Georgia’s 2020 presidential election results, which showed now President Joe Biden with a narrow victory in the state. Kemp’s defiance has made him the target of Trump’s attacks.

Trump’s support of Perdue is one of the highest-profile and most risky of his more than 190 endorsements ahead of the Nov. 8 elections. Opinion polls have shown Kemp running well ahead of Perdue.

Trump has sought to showcase his power as a political king maker as Republicans choose their candidates for the November elections that will determine control of Congress and some statehouses.

“We’re in a fight for the soul of our state. We cannot take tomorrow for granted,” Kemp said on Monday. He touted his ending of business closures during the coronavirus pandemic and backing of restrictive voting laws and curbs on access to abortion.

Pence and Kemp praised the policies of the Trump administration and attacked Democrat Stacey Abrams, a voting-rights activist and the former minority leader in the state’s House of Representatives who is expected to face off against Kemp in a rematch of the 2018 election.

“Brian Kemp beat Stacey Abrams four years ago and, with your support, Brian Kemp will do it all again,” Pence said to cheers.

Some Kemp supporters in the crowd saw Pence’s role in the race as good for the Republican Party.

“Having Pence here is a step in the right direction for the Republican Party to step away from the Trump train,” said realtor Kay Morgan, 64, who voted for Trump twice but was dismayed by his false election claims and said she would not support him again. “I would like to see Pence run for office.”

Tony Willingham, 54, a project manager in an electric utility business, said he had never supported Trump and was encouraged Kemp was far ahead in the polls. “We’re huge fans of Vice President Pence. We believe in his Christian values and the wisdom he gets from God,” Willingham said.

Eric Tanenblatt, a Republican strategist in Georgia, thought the former president had tried to take over the party, but said, “Trump’s style turned a lot off people off. We can get these people back by getting people like Governor Kemp elected.”

On Monday evening, following the Kemp-Pence rally, Trump tried to shore up his candidate, calling into a Perdue event.

“David is the only candidate who can beat Stacey Abrams because I don’t believe Kemp can do it. He’s got too many people in the Republican Party that will refuse to vote,” Trump said. He did not mention Pence.

Perdue criticized Abrams in interviews that received attention on social media on Monday, after she decried Georgia’s high incarceration and maternal mortality rates.

“She ain’t from here. Let her go back where she came from if she doesn’t like it here,” he said, adding later, “She is demeaning her own race.” Abrams, who is Black, was born in Wisconsin and moved to Georgia with her family as a child.

In a fiery speech on Jan. 6, 2021, Trump repeated his false claims that his presidential election loss was the result of fraud, an assertion that has been rejected by multiple courts, state election officials and members of his own administration.

Thousands of his supporters stormed the U.S. Capitol that day in an attempt to stop formal certification of his defeat, sending lawmakers and Pence himself running for their lives. 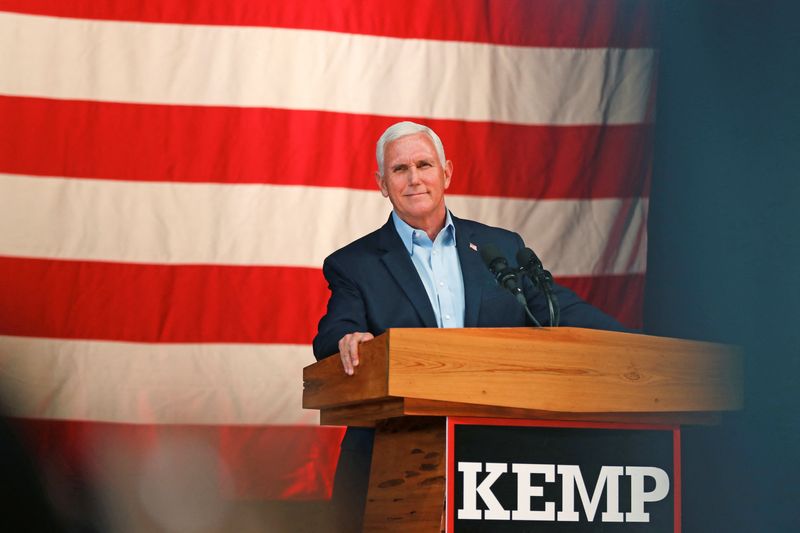 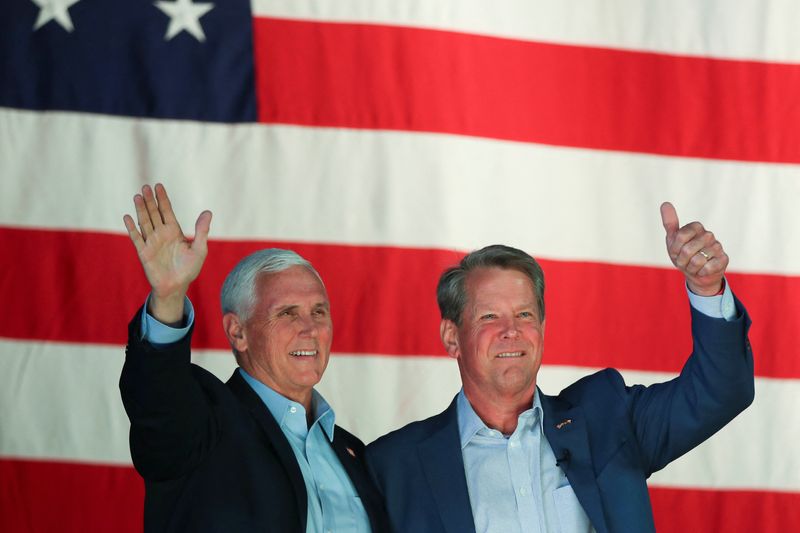 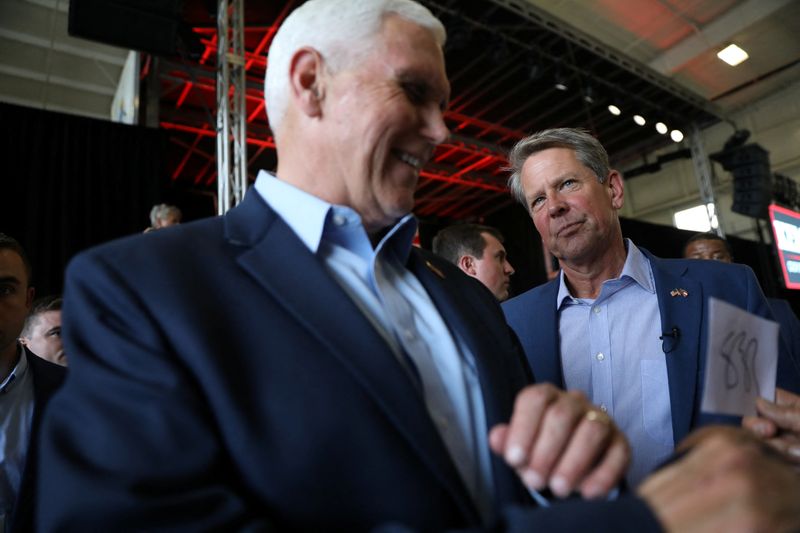 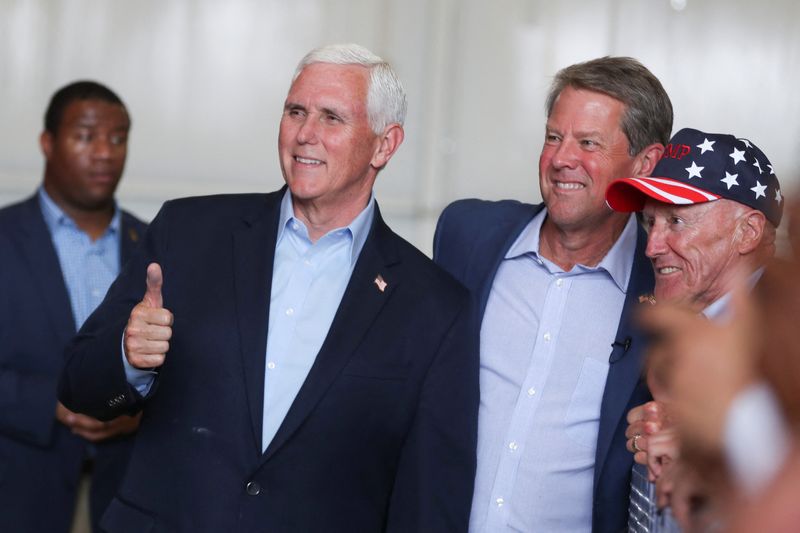 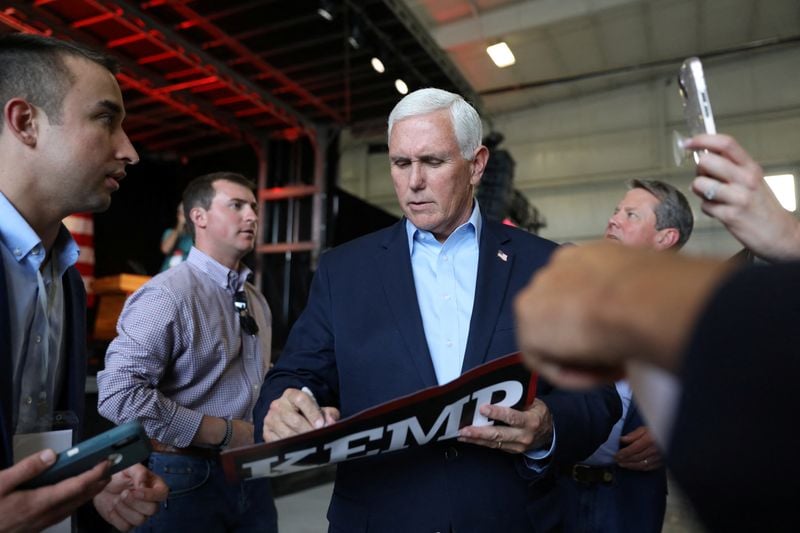