By David Morgan and Joey Roulette

WASHINGTON (Reuters) -Democrats and some Republicans in the U.S. Senate discussed tightening reviews of gun buyers following the deadliest school shooting in nearly a decade, although members of both parties acknowledged action was unlikely.

There is a wide gap between the two parties with Republicans arguing that new limits on legal gun purchases will do nothing to deter crime, despite impassioned pleas by Democratic President Joe Biden and some of his Senate colleagues to act.

“My Republican colleagues can work with us now. I know this is a slim prospect, very slim, all too slim,” Senate Majority Leader Chuck Schumer said in a floor speech a day after a gunman killed 19 young children and two teachers at a Texas school.

Democrats control razor-thin majorities in Congress but Senate rules mean they need at least 10 Republicans to pass major legislation. That’s a tall order with less than six months to go before November elections when Republicans aim to retake the majority.

Similar debates have erupted following the many mass shootings that have occurred in the United States over the past decades, with little to no action by Congress.

The Senate will hold a procedural vote on Thursday to launch debate on legislation to fight domestic terrorism that passed the Democratic-controlled House of Representatives after a mass shooting in Buffalo, New York, earlier this month.

Republicans Susan Collins and Pat Toomey said they had been in contact with Democratic Senator Chris Murphy about possible legislation to deny weapons to people deemed dangerous and to tighten background checks for gun purchasers.

David Hogg, a survivor of the 2018 Parkland, Florida, high school shooting and a gun-control activist, urged lawmakers to act.


“I want anything. We gotta save lives now. Kids are dying right now,” Hogg said in an interview. “Even if it just saves one life, because it’s an updated background checks bill, or an expansion of extreme risk protection orders, or anything like that.”

Murphy, of Connecticut, where a gunman killed 26 children and educators at the Sandy Hook Elementary School in 2012, had implored his colleagues in a Senate speech on Tuesday to act.

“The thing that would have the best chance would be the thing that’s gotten Republican support before, which is expanding background checks,” said Toomey, who told reporters he has been in contact with Murphy.

Collins said the details of the Texas shooting suggested a role for “red flag” legislation that would employ the courts and medical profession to deny firearms to people deemed mentally ill.

Murphy said he would go on pursuing a bipartisan deal.

“I’ve asked Senator Schumer for the space to have that conversation over the next 10 days,” Murphy said. “Over the course of a week and a half, we’ll know whether there’s an opportunity to get a bipartisan bill or not.”

Senator Joe Manchin, a Democrat who has stood as a roadblock to some key Biden priorities, told reporters he would not agree to change Senate rules to allow Democrats to pass gun legislation on their own but held out hope for a bipartisan solution.

Republicans assert a right to bear arms protected by the Second Amendment of the U.S. Constitution. The political stalemate angers Democrats.

“It’s fucking nuts to do nothing about this!” fumed Democratic Senator Mark Kelly, whose wife – former Arizona congresswoman Gabby Giffords – suffered a severe brain injury during an assassination attempt in 2011.


Schumer’s Republican counterpart, Republican Minority Leader Mitch McConnell, on Wednesday condemned the murderous actions of a “deranged” gunman and a “maniac” without addressing prospects for legislation.

Republicans became the target of gun violence themselves in 2017 when a gunman attacked lawmakers and colleagues at a baseball practice just outside Washington. Representative Steve Scalise was wounded in the attack.

Republican Senator Mike Rounds said that banning assault rifles or placing age restrictions on gun purchases would not have prevented the Texas shooting.

“Show us what would stop this from happening,” Rounds said. 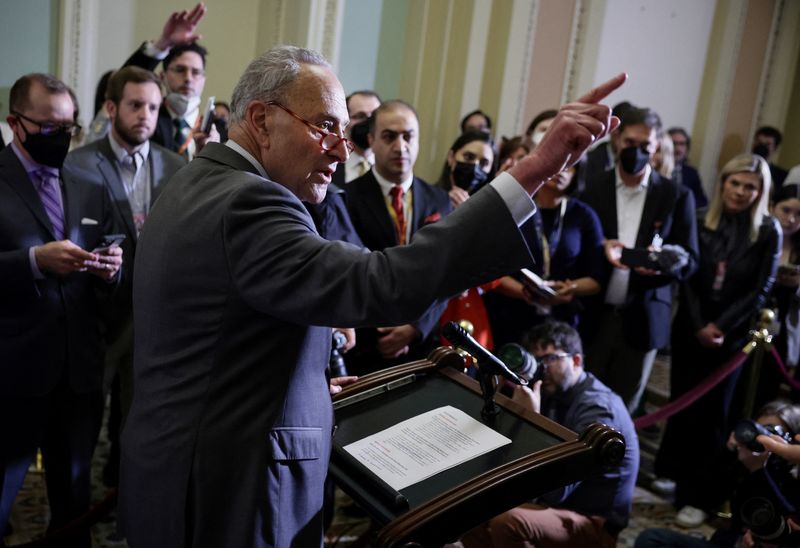