LONDON – Whatever the broader financial or economic stability risks of volatile crypto tokens, government watchdogs may reasonably balk at 10% household exposure to loosely-regulated speculative punts that double or halve in value every 6 months.

So far this year the leading crypto ‘currencies’ such as Bitcoin and Ether have dropped 40-50% and there’s been an earthquake in the parallel ‘stablecoin’ world of supposedly pegged tokens that act as links from regular finance to the twilight zone of crypto, or ‘decentralised’, finance.

Another typical year in the nether regions of finance? Caveat emptor, some might say.

But the latest twists touched another nerve among governments and central banks who fear they’ve let this ecosystem get out of hand without proper oversight or adequate transparency to reach levels beyond which they may find it difficult to control or shore up.

G7 finance chiefs meeting in Germany late last week cited the crypto turmoil and urged its Financial Stability Board “to advance the swift development and implementation of consistent and comprehensive regulation.”

“It’s an emergency question now… I strongly hope we will have this regulation in Europe this year,” Villeroy said.

While still relatively small compared to stocks, bonds or real estate, two surveys released this week from the U.S. Federal Reserve and European Central Bank show that at least 10% of all households in both regions have dabbled in crypto as an investment over 2021.

The Fed’s annual “Survey of Household Economics and Decisionmaking” report polled 11,000 adults late last year and painted a relative picture of rude health for consumer finances overall – conducted though it was before one of the worst starts to a year in more than 20 years.

While this might pale against estimates of just over 50% of U.S. households holding stocks for saving or retirement, it’s likely an uncomfortably large share for governments who see these tokens as having little or no use or value longer term and who fret about financial sharks burning inexperienced savers.

And if, as some estimate, a majority of those holding the tokens arrived over the past year and are underwater at levels over $30,000 or less, then damage limitation may be the first task of watchdogs and governments.

ECB chief Christine Lagarde, for one, said this week that Bitcoin and the hundreds of other lesser-known tokens were basically ‘worth nothing’.

Graphic: Chart on crypto use from ECB household survey – https://fingfx.thomsonreuters.com/gfx/mkt/dwpkrnkexvm/One.PNG

And for those who think it’s all just a bit of high-octane fun for wealthy folk who can afford to lose some marginal funds in a puff of smoke, there were other sobering details in the Fed survey. While almost half invested in crypto had annual incomes of $100,000 or more, almost a third earned less than $50,000.

The ECB’s Consumer Expectation Survey, meantime, chimed with the Fed findings and showed as many as 10% of euro zone households now own crypto tokens in one shape or form.

Middle income groups appear to have given the whole thing a bodyswerve.

The question then is whether – much like the marketing of highly speculative and volatile stock or bond funds to retail investors – regulators should finally demand overhaul of rules on marketing, celebrity-endorsed advertising or easy access to these tokens on fintech banking apps or trading portals.

And now may be the time to act while the potential macroeconomic fallout still be limited and before crypto too becomes ‘too big to fail.”

Goldman Sachs estimates the global market for crypto dropped by about a trillion dollars to $1.3 trillion since late last year, with U.S. households exposed to one third of that hit.

Comparing that decline to overall US household net worth of $150 trillion, it saw little additional drag on the wider economy and felt the 20% drop in stocks over the same time would have far more impact.

But for Deutsche Bank analyst Marion Laboure the game is up already. Curbing the speculative excesses of some of the more marginal coins will likely defeat the attraction for many people of being there at all and for those tokens that threaten to rival existing currencies, the hammer will come down harder.

“Many historical examples highlight the power of regulatory bodies to maintain financial stability,” she wrote. “Regulation is coming sooner rather than later.”

COLUMN-Crypto warnings invoke U.S. subprime bust, 2008, and all that

(The author is editor-at-large for finance and markets at Reuters News. Any views expressed here are his own.) 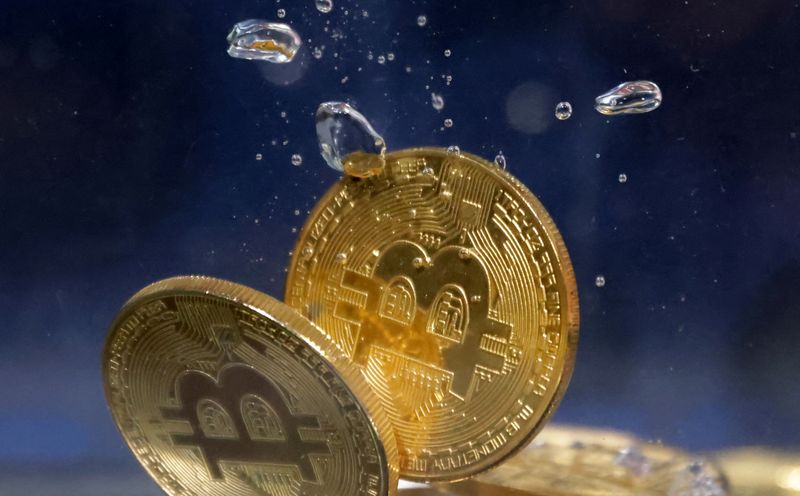