UVALDE, Texas (Reuters) – Guns are part of everyday life in Uvalde, Texas, a Republican-leaning corner of the state’s Hill Country where hunting is a common pastime and gun stores abound.

Support for the Second Amendment of the U.S. Constitution still runs strong here, even after an 18-year-old gunman killed 19 elementary school children and two teachers with an AR-15 semi-automatic rifle this week.

But interviews with more than a dozen residents since the massacre revealed support for raising the minimum gun-buying age from 18 to 21; requiring more stringent background checks; and making it harder to obtain assault rifles.

Background checks should assess whether prospective gun buyers were mentally fit, not just if they had a criminal record, said Virginia Aguilar, 43, whose 7-year-old son’s school went into lockdown as the shooting unfolded at Robb Elementary School.

“I think in order to give somebody the privilege of having a gun in their home, they need to see that they’re stable,” she said as she sold jewelry in a Uvalde boutique on Thursday.

But like others, Aguilar expressed doubts about whether stricter requirements would make much of a difference. “Everybody’s going to find a loophole to getting a gun,” she said.

Some said stronger school security would be a more effective measure than tighter firearms regulations. Others said tougher gun laws would be too politically divisive, even if they personally supported them.

For many in the streets, stores and markets of Uvalde, it was too soon, with emotions still too raw, to consider public policy changes.

“Now is not the time,” said 57-year-old baker Norma Velasquez, tearing up at her shopping cart as she recalled two children who died in the attack: Xavier Lopez, a distant cousin, and Amerie Jo Garza, who used to accompany her grandmother to buy cakes from Velasquez.

Salvador Ramos, a high school dropout who turned 18 on May 17, legally bought two rifles and 375 rounds of ammunition just days before he attacked the elementary school, according to law enforcement officials.

“I believe that assault weapons like that, there should be a special permit, a procedure for someone to own one,” said Jay Spears, a 67-year-old hunting guide.

Political debate over gun laws – including proposed assault weapons bans – has intensified nationwide since Tuesday’s massacre. The contours of that conversation look different in Texas, where state lawmakers passed a bill last year allowing open carry of a firearm without a license or training.

Texas also allows guns on college campuses and does not require criminal background checks to purchase firearms from unlicensed sellers, such as gun show vendors.

Texas Governor Greg Abbott called off a personal appearance at the National Rifle Association’s annual convention in Houston on Friday, but in pre-recorded remarks he argued against new gun laws.

“There are thousands of laws on the books across the country” that have not stopped school shootings, the Republican governor said.

In the produce section of a Uvalde grocery store, nurse Lori Nalepa Martinez, 49, said the shooting that touched nearly everyone in the community had convinced her of the need for immediate and strict gun reform, such as banning assault rifle sales.

She said she also would now support arming teachers, a strategy embraced by conservative politicians in Texas but rejected by gun control activists and researchers.

“I would totally be okay with that, and I’ve never been a gun person, but it’s made me reconsider that,” said Martinez, whose three children had attended Robb Elementary.

Spears, the hunting guide, agreed he would like to see tighter school security measures, including metal detectors and armed teachers.

“When those kids come in in the mornings, have a couple of those to check them just like you do at the airport – boom, boom, boom – make sure nobody’s bringing in a handgun,” he said. 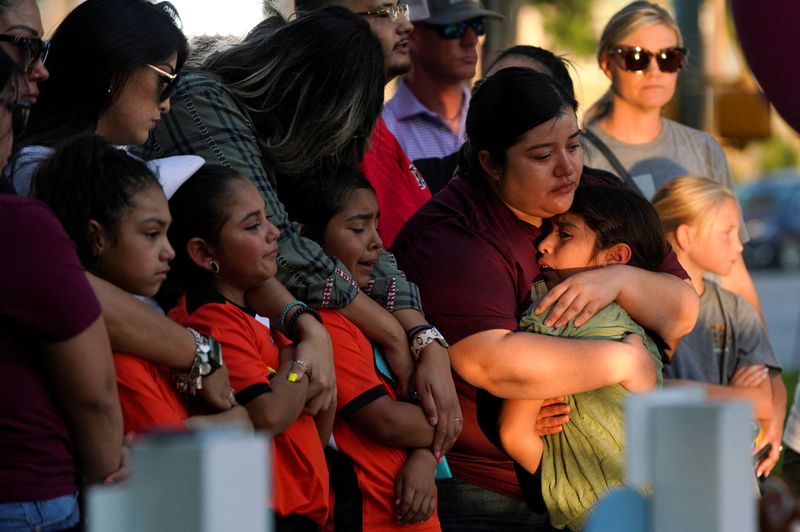