LONDON -Cash-strapped Britons are increasing the number of supermarkets they visit as they shop around for the best prices amid a worsening cost of living crisis, industry data showed on Tuesday.

Market researcher NielsenIQ said a hunt for value led to a 7% rise in the number of stores visited – both their usual outlet and trying other shops – over the four weeks to May 21, compared with the previous year, in the latest sign of stress in an economy normally powered by the consumer.

“Shoppers are becoming more considered in what they buy,” Mike Watkins, NielsenIQ’s UK head of retailer and business insight, said, adding that consumers may also start shunning pubs and restaurants to dine at home more.

Surging prices are causing the biggest hit to UK household incomes since at least the 1950s and consumer confidence is at near record lows. Inflation hit a 40-year peak of 9% in April and is projected to rise further.

Rival market researcher Kantar said last week that over one fifth of British households described themselves as “struggling” to make ends meet.

Britons are also changing their behaviour.

They have traded down in both stores and products, visiting discounters more and switching from branded to lower priced and private label products.

They are also cutting back on meat, fish and alcohol, reducing car journeys to save on petrol, and cancelling subscription streaming services and repair warranties on domestic appliances.

NielsenIQ said total grocery sales at UK supermarkets rose 0.6% year-on-year over the four-week period, driven by a 2.3% increase in the final week.

It said sales of goods on promotion fell from 21.5% last month to 20.4%, suggesting supermarkets were holding back offers to drive sales when shoppers were looking to spend as little as possible on each trip.

The market researcher said the forthcoming Platinum Jubilee bank holiday weekend should give a welcome, if short-term, boost to grocery sales, however, with 20% of households expected to buy extra groceries for the weekend.

NielsenIQ said over the 12 weeks to May 21, total sales fell 1.7% year-on-year, with market leader Tesco, Marks & Spencer, German-owned discounters Aldi and Lidl and the Co-operative all gaining market share.

M&S said last week that Britons would not feel the full force of the country’s cost of living crisis until the autumn.

(Reporting by James Davey;Editing by Bernadette Baum and Alison Williams) 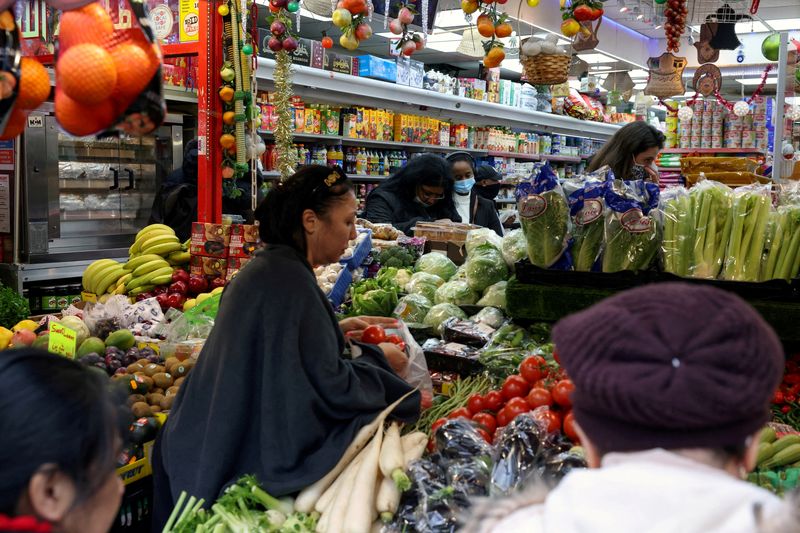