By Paul Lienert and Ben Klayman

(Reuters) – Ford Motor Co needs to overhaul its century-old business model – from slashing advertising spending to reworking its dealer network – if it is to earn enough profit on electric vehicles to compete with Tesla and others, the automaker’s chief executive said on Wednesday.

The shift from internal combustion vehicles to EVs is “the most exciting land grab in our industry since the Model T” introduced by Henry Ford in 1908, CEO Jim Farley said at an Alliance Bernstein conference.

As the competition shifts from established players like Ford to newcomers from China and Silicon Valley, “the industry is heading to a huge price war,” Farley said.

As a result, Ford is reviewing nearly every aspect of its business just months after Farley restructured the company into three units – Ford Pro for commercial customers, Ford Blue for its profitable gasoline-powered trucks and SUVS, and Ford Model E for electric vehicles.

Farley said Tesla, which was founded 100 years after Ford, enjoys a significant cost advantage that has convinced the Michigan-based automaker to consider reducing or eliminating dealer inventories of unsold vehicles and following Tesla in selling some vehicles directly to customers.

He said Ford may have “multiple tiers of dealers” and some will be more specialized as the company launches a second generation of electric vehicles in about four years.

“We have this opportunity to use our physical presence to outperform” newcomers, including tech companies, Farley said, but future standards for dealers “are going to be brutal. They’re going to be very different than today.”

Farley said he was “not convinced” that Ford needs to continue buying advertising, especially for popular new electric models like the F-150 Lightning, which is sold out for the first year. The U.S. automaker spent $3.1 billion on advertising last year, according to the company’s annual report, compared to nothing for Tesla.

“If you ever see Ford Motor Company doing a Super Bowl ad on our electric vehicle, sell the stock,” he said.

(Reporting by Paul Lienert and Ben Klayman in Detroit; Editing by Bernadette Baum) 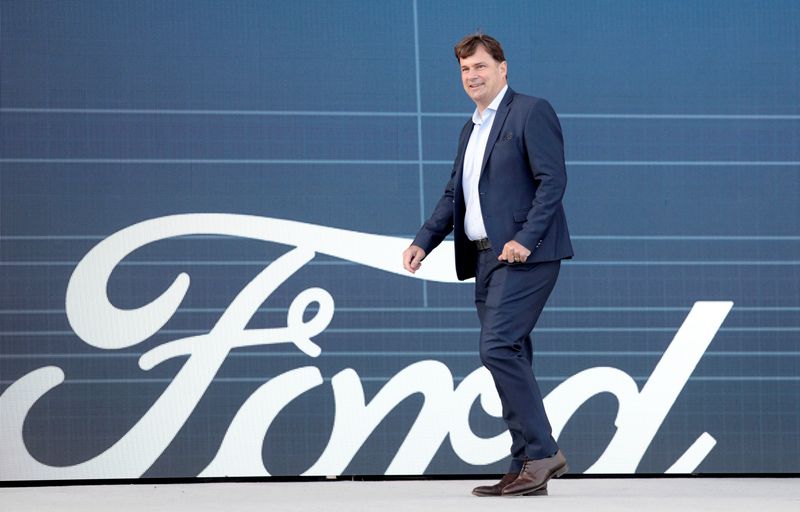