Relations between Moscow and the West have worsened markedly since Feb. 24 when Russia sent tens of thousands of troops into Ukraine in what the Kremlin calls “a special military operation.” The move prompted unprecedented western sanctions that hammered Russia’s financial markets and the economy.

Turlov, Freedom Holding Corp’s 34-year-old founder and chief executive, said in an interview with Reuters he will buy Russia-based Freedom Finance from the U.S. holding company as political tensions and related restrictions take their toll.

“This is being done so the Russian company can continue to independently carry out business in Russia,” said Turlov.

“Today we do not see the possibility to keep the Russian business inside the U.S. holding due to the ban on any investment in Russia for U.S. residents as well as due to a large number of restrictions for deals with non-friendly non-residents.”

In the first phase of the deal, Turlov will buy the Russian business as individual in the transaction that envisages swapping $35 million worth of Freedom Finance’s capital in Russia to $35 million of capital of two Kazakstan’s insurance companies that became part of the holding on May 18.

“The (Russian) business itself will be kept as we have many clients, payments in Russia and an interesting development strategy. But the Russian business will exist independently of the holding company,” Turlov said.

In the future, Freedom Finance, which provides direct access to trading in the U.S. stock market as well as in Moscow and on European bourses, will be rebranded and sold to its Russian top management team, Turlov said.

“But this deal is not on the table yet.”

Freedom Holding Corp, listed on Nasdaq in 2019, has banks in Russia and Kazakhstan. With headquarters in Kazakhstan’s city of Almaty, its unit Freedom Finance is one of Russia’s 10 largest brokerage firms. Freedom Finance has offices in Ukraine, Kyrgyzstan, Uzbekistan and a branch office in Germany.

Turlov said Freedom Finance had around 163,000 clients in Russia as of late March, part of 414,000 clients in the entire holding with own capital of $500 million.

“Today we can say that outside Russia we have more business and clients than in the country.”

The Russian unit recently obtained new clients after Feb. 24 that the company had previously “dreamt about” as the company managed to keep direct access to the U.S. market, Turlov said. But the company will no longer carry out business as before after recent geopolitical developments.

“In our view, there will be new challenges for the Russian market in the near future.” 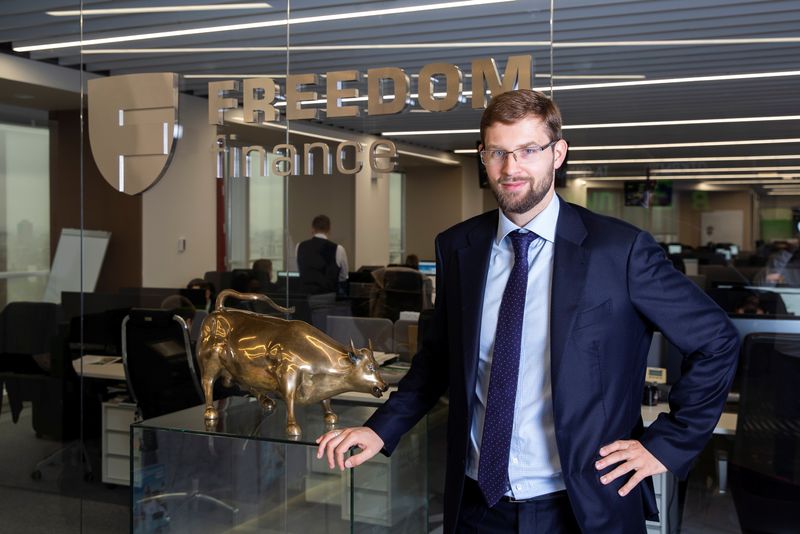