(Reuters) – As President Joe Biden and Congress ponder how to respond to the latest U.S. mass shootings, the Supreme Court is due to decide a major case that could undermine new efforts to enact gun control measures while making existing ones vulnerable to legal attack.

The justices are expected to rule by the end of this month in a challenge by two firearms owners and the New York affiliate of the National Rifle Association, an influential gun rights group closely aligned with Republicans, to that state’s restrictions on carrying concealed handguns in public.

Oral arguments in the case held last November indicated that the court’s 6-3 conservative majority was ready to shoot down New York’s restrictions. Such a ruling could set the stage for other state-level gun restrictions to be undone, including bans on assault-style weapons and high-capacity magazines.

The ruling in the New York case could clarify the way judges evaluate whether firearms restrictions violate the U.S. Constitution’s Second Amendment right to keep and bear arms – a potential new test emphasizing the provision’s text and the history and tradition of gun regulations dating back centuries.

Such a focus “would result in courts being more likely to invalidate restrictions that lower courts have up to this point in time validated,” said Royce Barondes, a University of Missouri School of Law professor who teaches firearms law.

Gun rights, cherished by many Americans, are a contentious issue in a nation that has experienced high levels of firearms violence and numerous mass shootings. These include the May 24 attack at an elementary school in Uvalde, Texas that killed 19 children and two teachers and the May 14 attack at a grocery store in Buffalo, New York that killed 10 people.

Democratic-led congressional efforts to enact such measures typically have been stymied by Republican opposition for decades.

Biden has sought to appeal to what he called “rational” Republicans to join Democrats in curbing high-caliber weapons and taking other federal action. Talks led by Democratic Senator Chris Murphy and Republican Senator John Cornyn are underway, with no assurance of success.

In the poll, 84% of respondents expressed support for background checks for all firearms sales, while 70% backed “red flag” laws enabling authorities to confiscate guns from people found to be a threat to public safety.

In the absence of federal action, a number of primarily Democratic-led states have enacted restrictions like these in recent years. Gun control advocates fear that a Supreme Court ruling in favor of the plaintiffs in the New York case could make it easier to challenge existing state and local measures or future restrictions.

A few other cases involving gun laws are awaiting the court’s review. These include challenges to a Maryland ban on assault-style weapons and a New Jersey ban on firearm magazines that can hold more than 10 rounds of ammunition – laws that legislatures in both states passed in response to mass shootings.

Legal experts expect the justices, after issuing their decision in the New York case, to order lower courts to reconsider rulings upholding those other restrictions.

A test set out by the justices based on history and tradition would not automatically jeopardize gun restrictions, according to Joseph Blocher, co-director of the Duke Center for Firearms Law.

But it could require judges to analogize, for instance, between modern weapons such as assault-style semiautomatic rifles and historical ones such as muskets, leaving room for “personal, ideological predispositions,” Blocher said.

“A person with a broad view of gun rights is likely to see a modern AR-15 as being relevantly similar to a black powder musket, while a person more supportive of gun regulations might see them as quite different,” Blocher added.

New York’s law requires people to show a “proper cause” for carrying a concealed handgun – including an actual, rather than speculative, self-defense need – to receive permission from a state firearms licensing officer. Unrestricted licenses are granted more freely in the state’s rural areas than densely populated New York City.

The plaintiffs challenging that law lost in lower courts, but the Supreme Court’s conservatives have taken a broad view of gun rights. The case could yield the most important gun rights ruling since 2010. The court in 2008 recognized for the first time an individual’s right to keep guns at home for self-defense, and two years later applied that right to the states.

(Reporting by Andrew Chung; Editing by Will Dunham and Scott Malone) 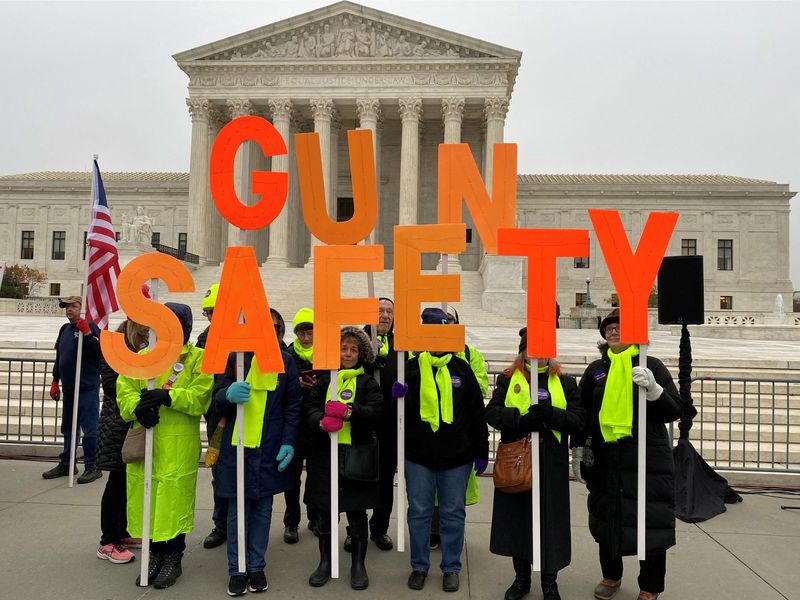