By Nivedita Balu and Yuvraj Malik

(Reuters) – Microsoft Corp on Thursday cut its fourth-quarter forecast for profit and revenue, making it the latest U.S. company to warn of a hit from a stronger greenback.

A hawkish Federal Reserve and heightened geopolitical tensions have driven a 14% gain in the dollar against a basket of currencies over the last year, forcing companies such as Coca-Cola Co and Procter & Gamble to temper expectations for the rest of the year.

A stronger greenback typically eats into the profits of companies that have sprawling international operations and convert foreign currencies into dollars.

“Software companies including Microsoft have significant operations outside the U.S. and I think Microsoft is being prudent here to get ahead of (market) expectations and be transparent around currency impacts,” said Steve Koenig, managing director at SMBC Nikko Securities.

Microsoft, which gets about half its revenue from outside the United States, lowered its revenue forecast for all three segments, which include Windows products, cloud services and personal computing.

Corporate hedging activity has increased as more companies try to guard their profits against the impact of currency fluctuations amid surging inflation.

It is common for companies to protect themselves from unexpected forex moves, but the urgency comes after years of muted forex volatility, during which currency fluctuations had limited impact on earnings.

Analysts are forecasting earnings of $2.33 per share on revenue of $52.87 billion, according to Refinitiv data.

The company in April forecast double-digit revenue growth for the next fiscal year, thanks to demand for its office software and cloud services as economies reopen and businesses shift to a hybrid model of allowing staff to alternatively work from office and home.

A Microsoft executive is scheduled to speak at Jefferies Software Conference later in the day.

(Reporting by Nivedita Balu and Yuvraj Malik in Bengaluru; Editing by Aditya Soni and Anil D’Silva) 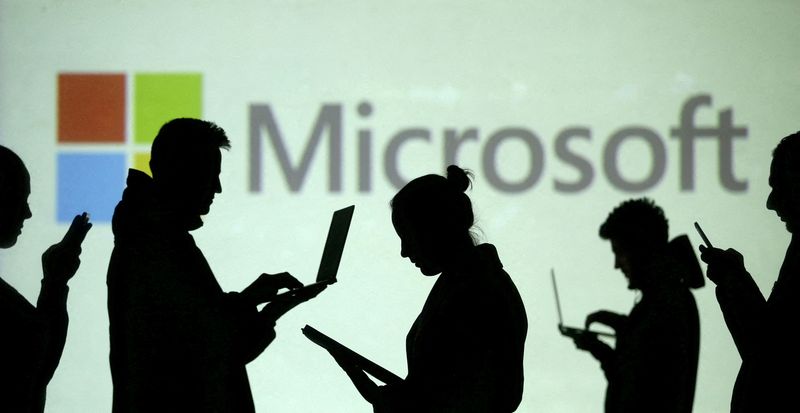