KYIV – Ukraine jacked up its main interest rate to a seven-year-high of 25% from 10% on Thursday, tightening policy for the first time since the Russian invasion to tackle double-digit inflation and protect the hryvnia as some business activity returns.

The Feb. 24 invasion has devastated the economy, which could shrink by at least a third this year as the war has forced 40% of businesses to close, destroyed infrastructure, blocked shipping routes and reduced whole towns to rubble.

Speaking at a briefing, Central Bank Governor Kyrylo Shevchenko called for talks with the International Monetary Fund on a new aid programme.

The rate increase was criticised by an adviser to Ukrainian President Volodymyr Zelenskiy’s office, who said the rate was too high and dangerous to the economy during wartime. It was not clear whether he was speaking in a personal capacity.

The National Bank of Ukraine (NBU) had frozen its main rate 10% at the start of the invasion, but last week it signalled it could resume regular monetary policy reviews as business activity partially recovered in safer parts of the country.

It is betting that a sharp rate hike will also nudge the government to raise the yield on domestic bonds, making hryvnia assets more attractive and preventing household incomes and savings from being eroded by inflation.

The central bank has fixed the hryvnia exchange rate, which has forced it to sell billions of dollars in forex reserves since the start of the invasion. It aims to let the currency float freely eventually once conditions allow.

“The NBU expects that a significant rise in the key policy rate, to 25%, will be sufficient to ease pressures on the FX market and stabilize inflation expectations, which in the future will lay the foundations for a monetary policy easing cycle,” it said.

“If yields on hryvnia assets do not rise sufficiently, international reserves will keep depleting rapidly and imbalances will build up in the economy,” it said.

Inflation was already in double digits before the conflict began and climbed further to around 17% in May from 16.4% in April, according to NBU estimates.

The central bank said inflation could double in 2022 from 10% in 2021, pushed up by rising global prices and the damage of the war on domestic production and supply chains.

“A decisive rise in the key policy rate will spur investors’ interest in hryvnia assets, while also easing pressures on international reserves and reining in inflation,” the NBU said.

The number of small businesses that had suspended operations in April fell to 26% from 73% in March, according to a survey by the European Business Association, the union of businesses operating in Ukraine.

Thursday’s move takes the main interest rate to its highest level since 2015, when Ukraine’s economy was reeling from Russia’s annexation of Crimea and the outbreak of war between Ukrainian troops and Russian-backed forces in eastern Ukraine.

“The NBU raised the rate to 25%. That’s too much. Abrupt movements during the war, when the economy is in a fragile state – are dangerous,” presidential adviser Tymofiy Mylovanov wrote on Facebook.

“It was necessary to raise the rate gradually, in two – three stages.” 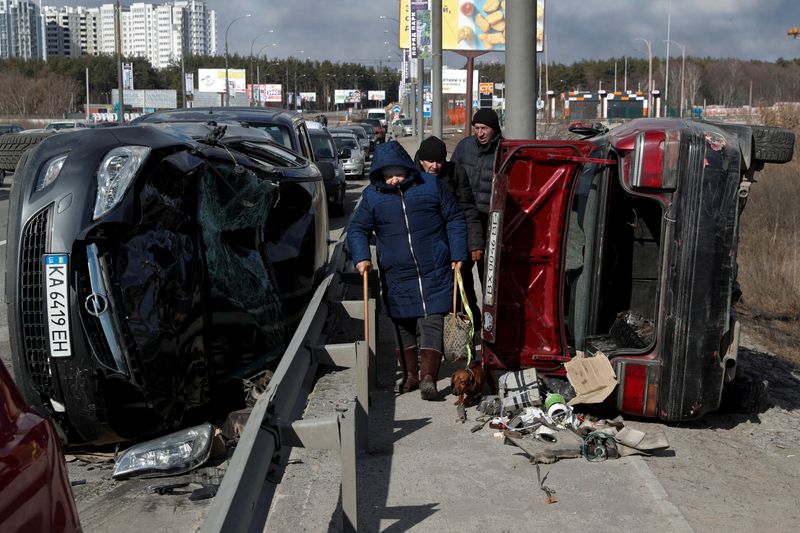