LONDON – A beaming Queen Elizabeth waved to cheering crowds massed outside Buckingham Palace on Thursday as Britain kicked off four days of pomp, parties and parades to celebrate her record-breaking 70 years on the British throne.

The 96-year-old monarch appeared on the balcony alongside her family, but the palace later said she had experienced a recurrence of mobility problems and some discomfort, and would no longer attend a Service of Thanksgiving on Friday.

The queen has reduced her public appearances in recent months due to “episodic mobility issues”, and the palace had warned that her attendance at events to mark the Platinum Jubilee would be decided nearer to the time.

“The Queen greatly enjoyed today’s Birthday Parade and Flypast but did experience some discomfort,” the palace said.

“Taking into account the journey and activity required to participate in tomorrow’s National Service of Thanksgiving at St Paul’s Cathedral, Her Majesty with great reluctance has concluded that she will not attend.”

The queen later appeared at her Windsor Castle home just outside London to light the Principal Platinum Jubilee Beacon, one of thousands being lit across Britain and the Commonwealth on Thursday evening.

The news of the queen’s absence from Friday’s service took the shine off the first day of the Platinum Jubilee celebrations, when tens of thousands of royal supporters lined the streets of London for a military parade.

Elizabeth, holding a walking stick and wearing a dusky dove blue outfit, was joined by her son and heir Prince Charles, 73, his eldest son Prince William and wife Kate, and other senior royals on the balcony of Buckingham Palace.

While the family waved to the crowds and enjoyed a Royal Air Force fly-past, Louis – William’s 4-year-old son – covered his ears and howled as the planes roared overhead. He later jumped up and down as Red Arrow jets released red, white and blue smoke trails.

Elizabeth has been on the throne for longer than any of her predecessors, and is the third-longest reigning monarch ever of a sovereign state. Opinion polls show she remains hugely popular and respected among British people.

“Thank you to everyone who has been involved in convening communities, families, neighbours and friends to mark my Platinum Jubilee, in the United Kingdom and across the Commonwealth,” the queen said in a statement as the festivities got under way.

“I continue to be inspired by the goodwill shown to me.”

The celebrations began with the Trooping the Colour, a military parade held annually to mark the queen’s official birthday, where 1,500 soldiers marched to military music in ceremonial uniforms of scarlet tunics and bearskin hats.

Later the crowds moved to the Mall, the grand boulevard running up to Buckingham Palace, where in bright sunshine they cheered and waved Union flags. Fifteen Typhoon jets flew overhead in formation, spelling out the number 70.

Thursday marks not only the start of the Jubilee, but also the 69th anniversary of the coronation of Elizabeth, who became queen on the death of her father George VI in February 1952.

Some royal family members were absent on Thursday, including the queen’s second son Prince Andrew, 62, who settled a U.S. lawsuit in February in which he was accused of sexually abusing a woman when she was underage. Andrew denied the accusation.

The palace announced later that Andrew had tested positive for COVID-19 and would miss Friday’s service.

The queen’s grandson Prince Harry, now living in Los Angeles with his American wife Meghan after stepping down from royal duties, watched the parade but was absent from the palace balcony, with only “working” members of the family present.

The first day of the four-day celebration was marked with artillery gun salutes in London, across the United Kingdom and from Royal Navy ships at sea.

“It was lovely, everything we hoped it would be. We were here for the 25th and then the 50th (jubilee). But this was the best one,” said nurse Ian Higgins, 62, in London.

“You feel very proud when everybody comes together like this,” said yoga teacher Amanda Mackenzie, 51. “It’s really special.”

The government announced two public holidays to mark the celebration, which is the first major public gathering since the pandemic and a welcome distraction for many at a time of growing economic hardship.

Among the tributes pouring in was a video message from former U.S. president Barack Obama.

“Your life has been a gift, not just for the United Kingdom, but for the world. And it is with gratitude for your leadership and the kindness that you’ve shown me and my family that I say, may the light of your crown continue to reign supreme,” he said.

Not everyone will be joining in the festivities. The anti-monarchy campaign group Republic put up the message “Make Elizabeth the last” on billboards across Britain.

A number of climate change protesters also caused a brief disturbance by running out in front of marching soldiers on the Mall boulevard before they were dragged away by police. Several were arrested. 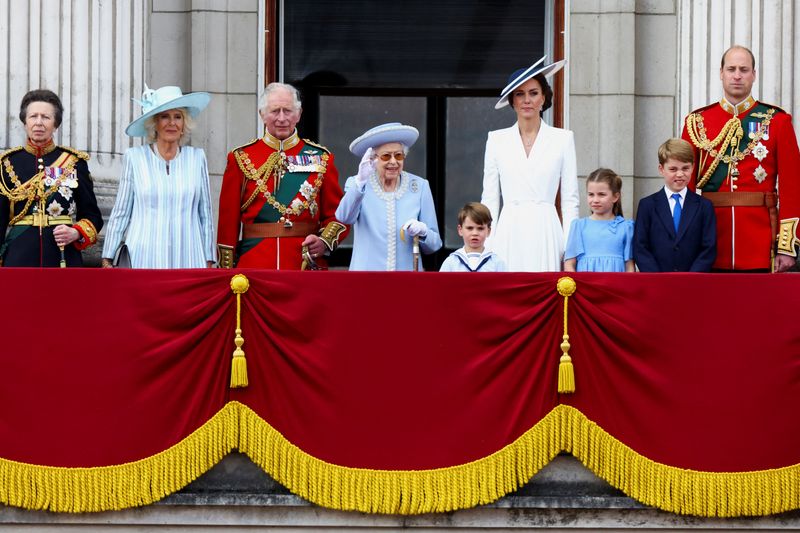 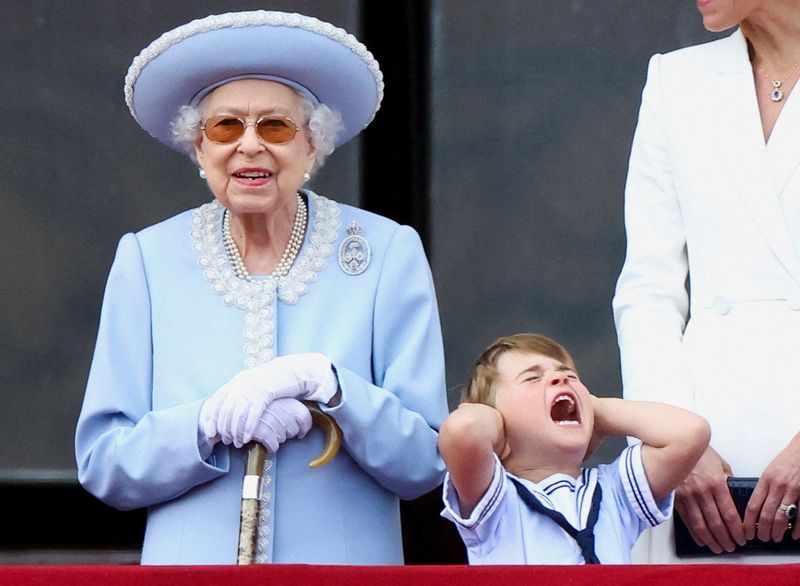 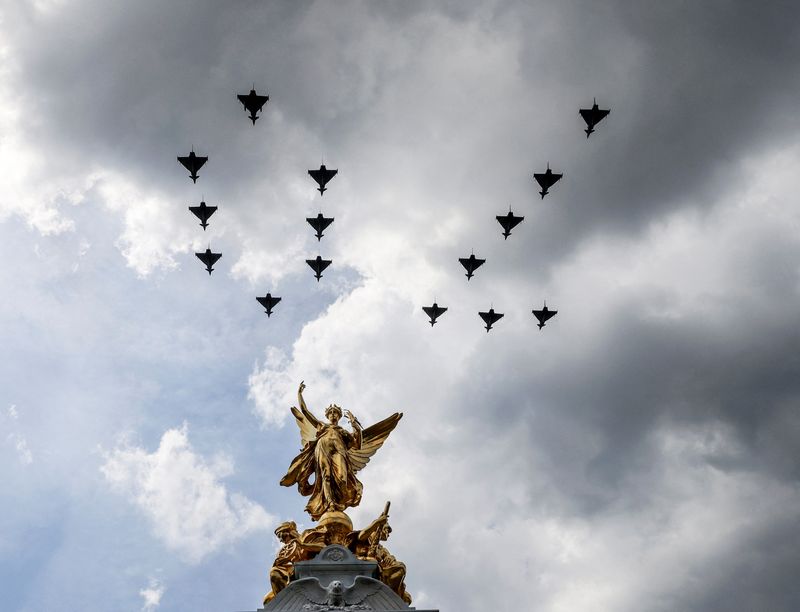 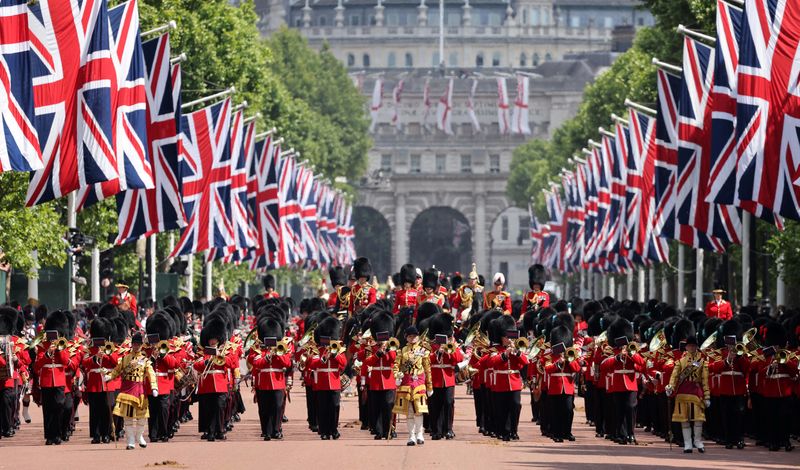 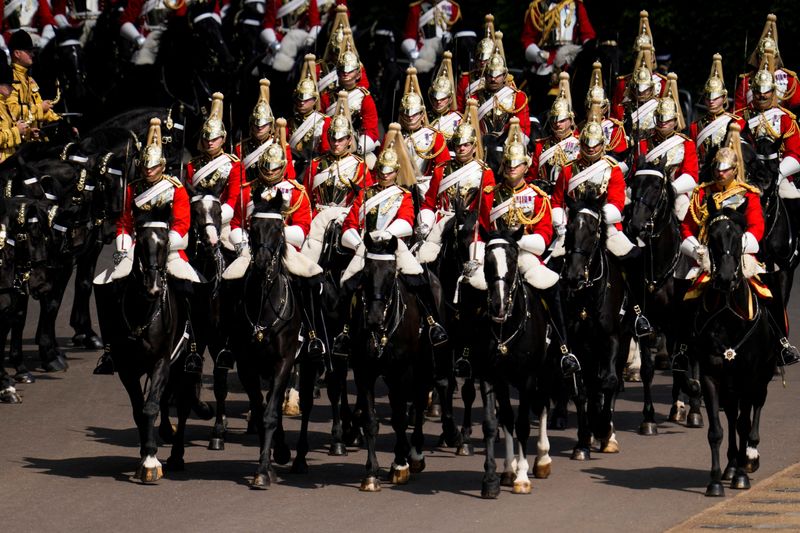 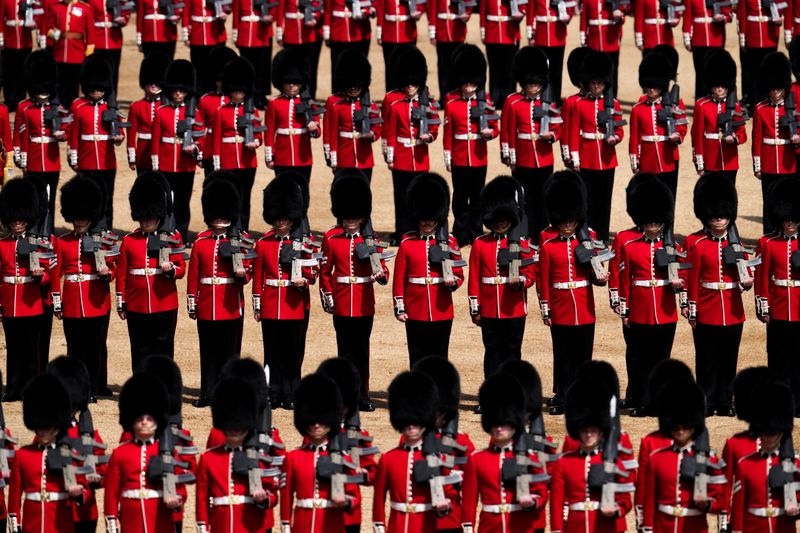 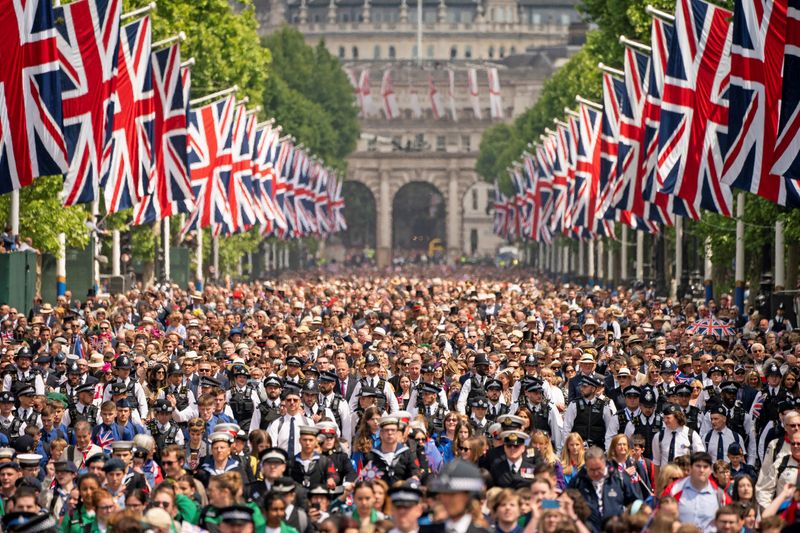 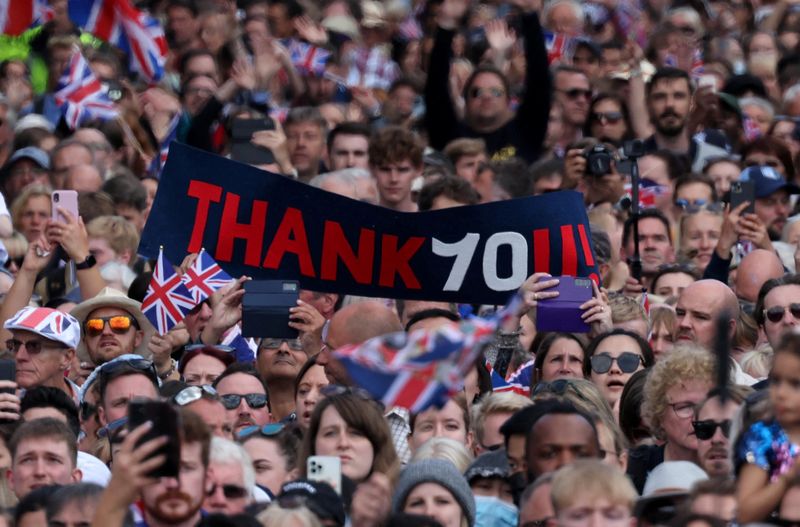 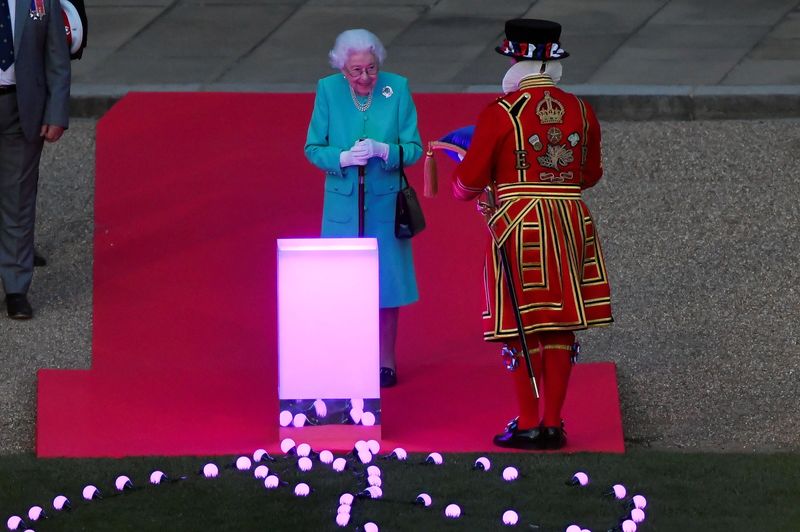 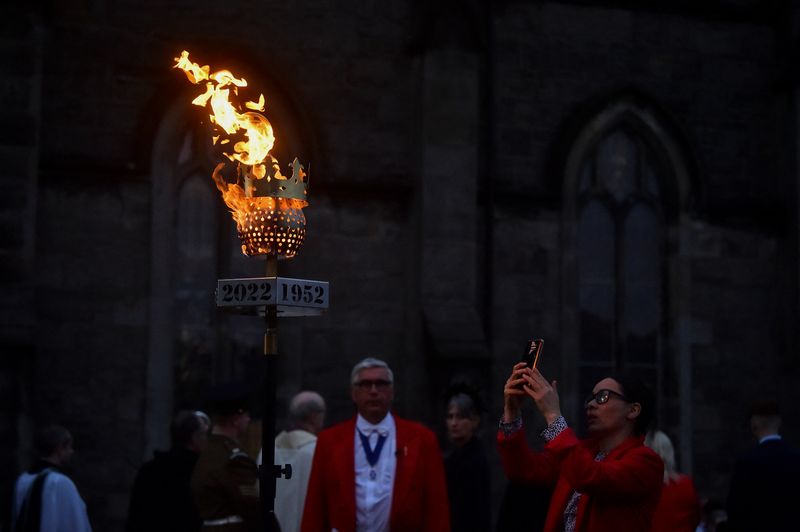 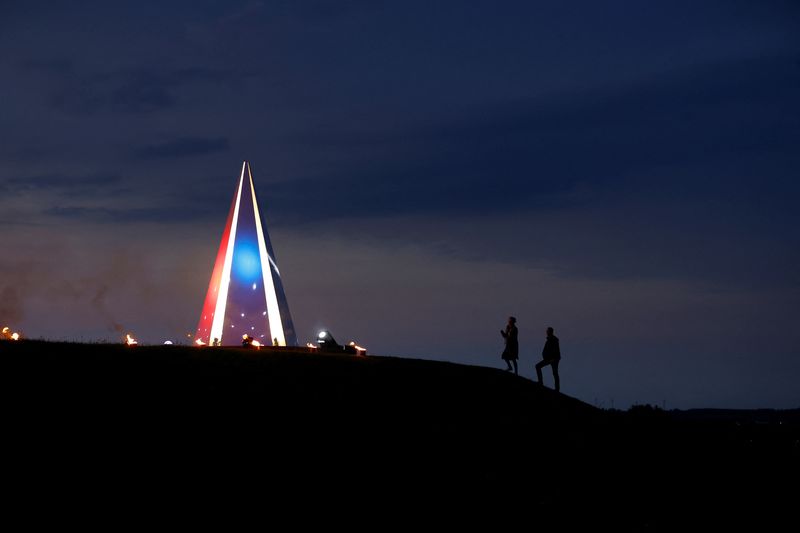 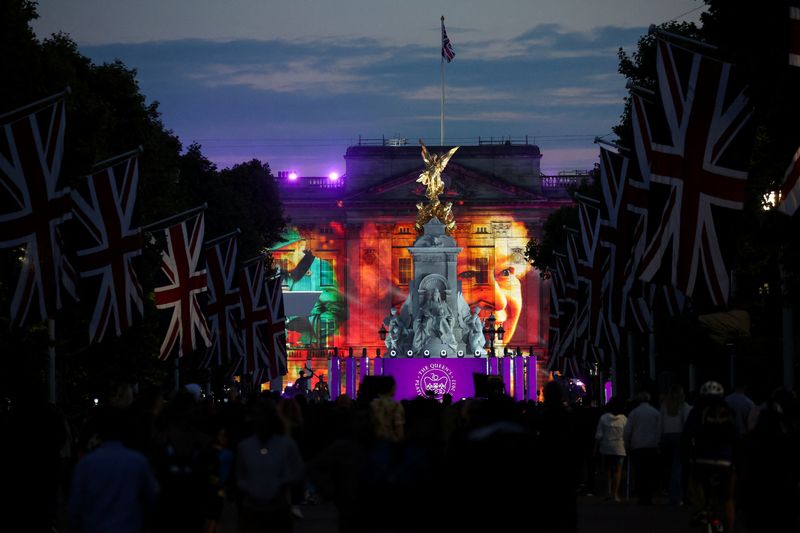