The pan-European STOXX 600 index fell 0.3% with volumes expected to be subdued due to holidays in Britain and China. It ended the tumultuous week 0.9% lower.

The rate-sensitive information technology sector led losses on the STOXX 600, while the auto sector declined 1.6% as France’s Faurecia slid 6.8%.

Investors ramped up their bets on ECB interest rate rises this year, and priced in a bigger, 50 basis-point hike at one of the bank’s policy meetings by October, following data this week showing record high inflation in the euro zone.

“In view of the dramatic inflation trend and the fact that the ECB is so clearly ‘behind the curve’, compared with the Fed, the ECB’s language should tend to become more hawkish,” Commerzbank analysts wrote in a note.

Data on Friday showed U.S. employers hired more workers than expected in May and maintained a fairly strong pace of wage increases, signs of labour market strength that will keep the Federal Reserve on an aggressive monetary policy tightening path.

European equity markets started the week on a stronger footing after China eased some COVID-19 restrictions and revealed more stimulus, but the optimism was swiftly undone by data that pointed to economies tipping into recession.

In France, growth in business activity in the country’s dominant services sector weakened in May compared to April, according to a survey. Germany’s services sector also showed signs of slowing growth.

The European Union’s partial ban on Russian oil imports, in retaliation for its invasion of Ukraine, also drove fears of inflation rising further.

“A recession, if any, will not occur this year but most probably in 2023. That said, we expect the market to discount more properly a lower momentum in the economy,” equity strategists at Generali Investments said.

Among other stocks, Italy’s Leonardo rallied 2.0% after Germany’s Rheinmetall made an offer for a minority stake in its OTO Melara cannon maker unit, according to a document and two sources close to the matter. 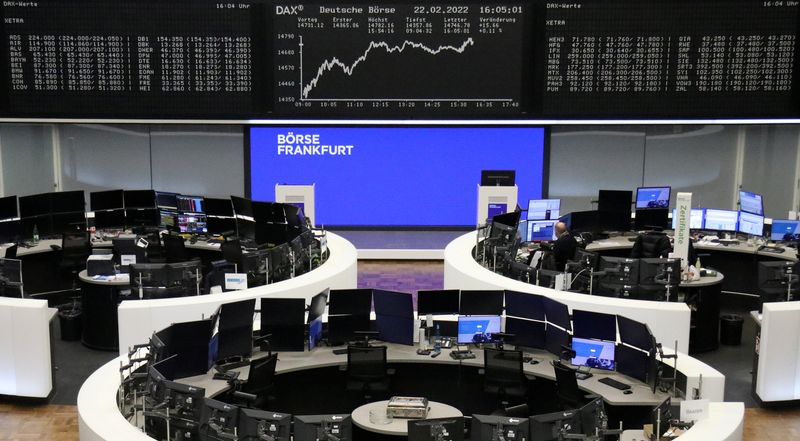