WASHINGTON – U.S. employers hired more workers than expected in May and maintained a fairly strong pace of wage increases, signs of labor market strength that will keep the Federal Reserve on an aggressive monetary policy tightening path to cool demand.

The Labor Department’s closely watched employment report on Friday also showed the unemployment rate holding steady at 3.6% for a third straight month, even as more people entered the labor force. It sketched a picture of an economy that continues to expand, although at a moderate pace. The U.S. central bank’s interest rate hike campaign and tightening financial conditions have caused anxiety among investors about a recession next year.

“The economy is miles away from being wrecked on the shores of recession with the economy continuing to hire workers at this fast of a clip,” said Christopher Rupkey, chief economist at FWDBONDS in New York. “It is not slowing enough to put the inflation fire out. The Fed’s work is not done.”

The survey of establishments showed that nonfarm payrolls increased by 390,000 jobs last month. Data for April was revised higher to show payrolls rising by 436,000 jobs instead of 428,000 as previously estimated. While May’s job gains were the smallest in a year, they were way above the monthly average that prevailed before the COVID-19 pandemic in 2020.

Employment now is just 822,000 jobs below its pre-pandemic level. Most industries with the exception of leisure and hospitality, manufacturing, healthcare, wholesale trade and local government education have recouped all the jobs lost during the pandemic.

There were hefty increases in professional and business services as well as transportation and warehousing payrolls. Construction employment rose by 36,000 jobs, while manufacturers added 18,000. Manufacturing employment is 17,000 below its pre-pandemic level. Government payrolls rose by 57,000 jobs.

Retail payrolls, however, dropped by 61,000 jobs. The decline was almost across the retail landscape, with general merchandise stores losing 32,700 jobs. Retailers like Walmart and Target have complained about high inflation squeezing profits. Amazon reported over-staffing at some warehouses.

The Fed is trying to dampen labor demand to tame inflation, with annual consumer prices increasing at rates last seen 40 years ago. There were 11.4 million job openings at the end of April, with nearly two positions for every unemployed person.

Stocks on Wall Street were lower. The dollar rose against a basket of currencies. U.S. Treasury prices fell.

Average hourly earnings increased 0.3%, matching April’s gain. That lowered the annual increase to a still-strong 5.2% from 5.5% in April. Some economists viewed this as a sign that wage inflation had peaked and was cooling. Earnings were held back by a slowdown in growth in wages for supervisory workers.

Average hourly earnings for production and non-supervisory workers rose 0.6% and were up 6.5% year-on-year.

“It will take a slowdown in annual wage growth to closer to 4% before the Fed can claim it is making significant progress towards its inflation goal,” said Michael Pearce, a senior U.S. economist at Capital Economics in New York.

The Fed has increased its policy interest rate by 75 basis points since March. It is expected to hike the overnight rate by half a percentage point at each of its next meetings this month and in July. Fed Vice Chair Lael Brainard said on Thursday she saw little case for pausing in September.

High inflation is eroding consumers’ purchasing power and business investment, but economists argue that the economy’s fundamentals are strong and that any downturn would likely be mild. The economy’s outlook has also been dimmed by a weakening global environment in part because of Russia’s war against Ukraine and China’s zero-COVID policy.

Details of the household survey from which the unemployment rate is derived were fairly upbeat. Household employment rebounded by 321,000 jobs after declining in April.

About 330,000 people entered the workforce. As a result, the labor force participation rate, or the proportion of working-age Americans who have a job or are looking for one, rose to 62.3% from 62.2% in April. The prime age participation rate increased two-tenths of a percentage point to 82.6%. It is four-tenths below its February 2020 level.

About 397,000 women 20 years and older joined the labor force, boosting their participation rate to 58.3% from 58.0% in April. The rising cost of living is forcing people, including some retirees, to return to work. At 1.4 million, long-term unemployment was the lowest since 2020, and down from 1.5 million in April.

But the number of people working part time for economic reasons rose by 295,000 to 4.3 million, reflecting an increase in the number of workers whose hours were cut due to slack work or business conditions, a potential red flag.

“The report should provide some comfort that the economy has the momentum to absorb the rate hikes the Fed expects to deliver in coming months,” said David Kelly, chief global strategist at J.P. Morgan Asset Management in New York. “However, increases in labor supply and moderation in wage growth also suggest that the economy can settle in to a path of slow and steady growth with low inflation if the Fed has the patience to let it.” 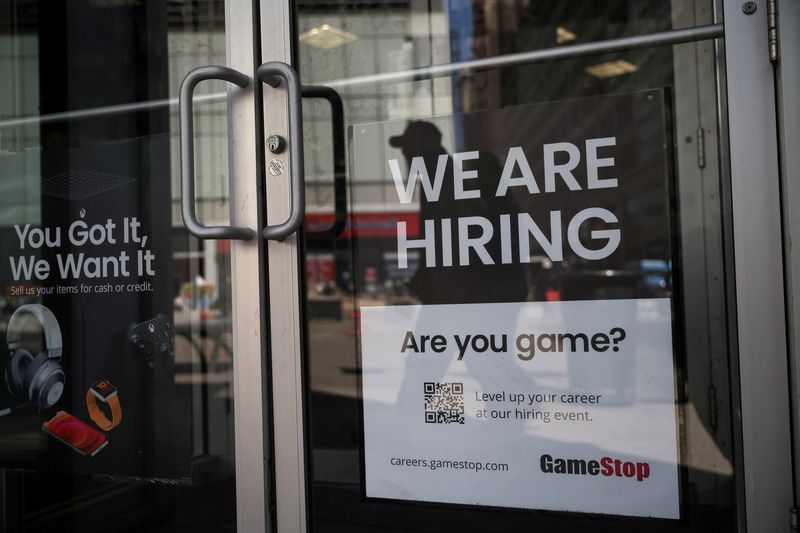