Spending improved from the previous month as households showed increasing appetite for services such as eating out, but the month-on-month rise was smaller than expected, suggesting the drag from the pandemic remained.

In a sign of trouble for the economy, real wages shrank at the fastest pace in four months in April as prices posted their biggest jump in more than seven years, weighing on household purchasing power.

Household spending decreased 1.7% in April from a year earlier, government data showed, faster than the market forecast for a 0.8% decline in a Reuters poll, dragged down by lower spending on cars and vegetables.

The month-on-month figures showed a 1.0% increase, also weaker than a forecast 1.3% rise.

“Higher energy and food prices are having a big impact and suppressing consumption,” said Takeshi Minami, chief economist at Norinchukin Research Institute. “While a spending recovery remains intact, its pace is slowing.”

The data raises some concerns for policymakers worried about the growing hit households are taking from rising prices for daily essentials and a weakening yen, which is pushing up import costs and making consumers hesitant to spend.

Households were becoming more accepting of price rises, Bank of Japan Governor Haruhiko Kuroda said on Monday, adding that a weak yen in general was likely to have a positive impact on the economy as long as its moves were not extreme.

The yen hit a fresh two-decade low against the U.S. dollar early on Tuesday, last trading around 132.20 yen per dollar.

A government official downplayed the impact of price rises on the cutback in food spending, saying it had already been on a declining trend from the spring of last year, a reflection of shrinking demand for eating at home.

But the outlook for consumer sentiment was extremely worrying, the official said, adding that it should be watched.

Government data on Tuesday also showed inflation-adjusted real wages shrank 1.2% in April, dropping at their fastest pace in four months as a 3.0% jump in consumer prices outpaced a gain in nominal wages.

“The problem is structural. It feels like the situation where wages and prices are not rising in line with each other can’t be left behind,” said Minami.

Japan’s economy is expected to rebound in the current quarter following a contraction in January-March, though it faces increased pressures from high raw material and energy prices as well as the weak yen. 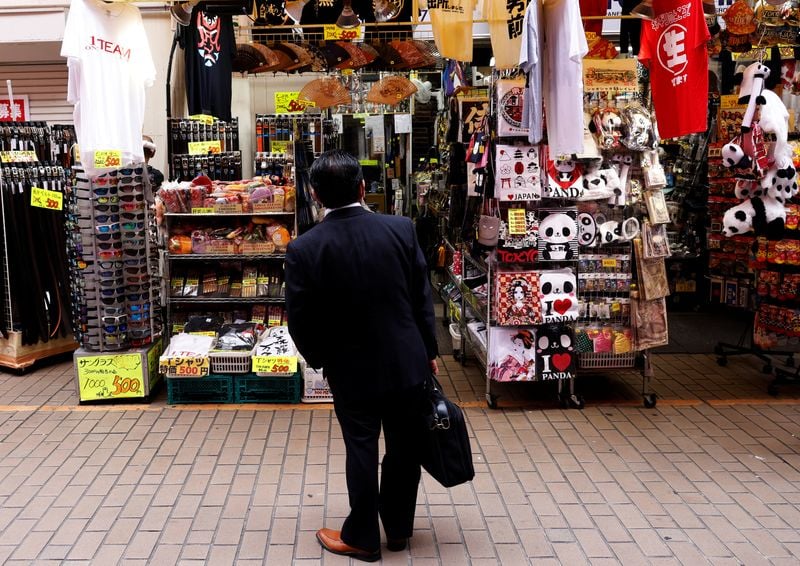