By Nathan Layne and Peter Eisler

LANSING, Michigan – State police in Michigan have obtained warrants to seize voting equipment and election-related records in at least three towns and one county in the past six weeks, police records show, widening the largest known investigation into unauthorized attempts by allies of former President Donald Trump to access voting systems.

The previously unreported records include search warrants and investigators’ memos obtained by Reuters through public records requests. The documents reveal a flurry of efforts by state authorities to secure voting machines, poll books, data-storage devices and phone records as evidence in a probe launched in mid-February.

The state’s investigation follows breaches of local election systems in Michigan by Republican officials and pro-Trump activists trying to prove his baseless claims of widespread fraud in the 2020 election.

The police documents reveal, among other things, that the state is investigating a potential breach of voting equipment in Lake Township, a small, largely conservative community in northern Michigan’s Missaukee County. The previously unreported case is one of at least 17 incidents nationwide, including 11 in Michigan, in which Trump supporters gained or attempted to gain unauthorized access to voting equipment.

Many of the breaches have been inspired in part by the false assertion that state-ordered voting-system upgrades or maintenance would erase evidence of alleged voting fraud in 2020. State election officials, including those in Michigan, say those processes have no impact on the preservation of data from past elections.

The search warrants also authorized state police to seize election equipment in Barry County’s Irving Township and have it examined. Local officials acknowledged publicly last month that state police raided the township office on April 29, a day after the warrant was issued.

Additionally, the records shed new light on election-equipment breaches in Roscommon County. One official in the county’s Richfield Township told investigators that he gave two vote-counting tabulators to an unauthorized and unidentified “third party,” who kept them for several weeks in early 2021. The county’s clerk acknowledged that she, too, handed over her equipment to unauthorized people.

Taken together, these documents depict a statewide push by pro-Trump activists to access election machinery in search of evidence for debunked theories that equipment was rigged in a crucial swing state that voted for Trump in 2016 and for Democrat Joe Biden in 2020.

Michigan Secretary of State Jocelyn Benson told Reuters that the state is investigating whether the election-system breaches are coordinated.

“If there is coordination, whether it’s among those in our state or reaching up to a national level, we can determine that and then we can seek accountability for all involved,” Benson, a Democrat, said in an interview.

Representatives of the state police and attorney general’s office declined to comment on the investigations detailed in this story.

Trump won all of the counties where breaches or attempted breaches in Michigan have been alleged. The results in those jurisdictions were affirmed by multiple audits and an investigation by the Republican-controlled state senate, which found no evidence of widespread fraud. But some activists and officials pushing election-fraud conspiracy theories claim that Trump’s margin should have been larger in these areas, and their efforts are roiling communities across the state.

In rural Barry County, Republican Sheriff Dar Leaf has teamed with proponents of the debunked claim that voting machines were rigged against Trump. Leaf is pursuing his own investigation, despite being urged last year by the Republican county prosecutor to suspend it for lack of evidence. Trump won the county by a 2-1 margin.

In recent weeks, Leaf’s office has sent expansive public records requests to the county’s township and city clerks, seeking an array of election-related records. The requests were condemned by clerks and local officials in Reuters interviews and public statements as baseless and burdensome. An editorial in the local newspaper, The Hastings Banner, called Leaf’s probe “a waste of time and an affront to our citizens.”

Leaf did not respond to requests for comment. In an interview with Reuters in February, he defended his investigation. He said he was “concerned” by theories that voting machines nationwide were rigged to favor Biden, and “we need to know if that happened in Barry County.”

The records obtained by Reuters show that in Lake Township, a community of about 2,800 people in Missaukee County, state police obtained a warrant on April 22 to search the clerk’s office for evidence of potential violations of election law.

Missaukee County, where Trump won in 2020 with 76% of the vote, is home to Daire Rendon, a Republican state lawmaker who has embraced the bogus claim that widespread fraud robbed Trump of victory in 2020. Rendon approached multiple clerks in her district, which includes Missaukee, Roscommon and other counties, asking them to give people seeking fraud evidence access to their voting equipment, Reuters previously reported https://www.reuters.com/world/us/michigan-pro-trump-state-lawmaker-sought-access-voting-machines-2022-05-20.

In December 2020, Rendon was one of two Republican members of Michigan’s House of Representatives who joined an unsuccessful federal lawsuit seeking to overturn Biden’s victory in five battleground states.

Rendon did not respond to requests for comment. In a May 25 interview with the Cadillac News, a local newspaper, she acknowledged contacting clerks but said she “never touched a voting machine” and did nothing wrong.

State police are also stepping up an examination of alleged breaches in Roscommon County. In February, Secretary of State Benson said unauthorized people “gained inappropriate access to tabulation machines and data drives” used in the county and in one of its townships, Richfield. Benson, however, didn’t name any suspects or provide other details.

The state police records show that investigators are probing allegations that the Richfield Township supervisor allowed a “third party” to take possession of the town’s two ballot tabulators for several weeks in early 2021. The records identify the supervisor only by title, not by name, but the county only has one person in that position, Republican John Bawol.

The records detail an interview with a “suspect.” The name and title is redacted but the suspect is described as an elected township official. The official told investigators he believed the tabulators were taken to “the northern suburbs of Detroit” in early February by an unidentified group of people driving a small SUV. The tabulators were not returned until March, the official added. The official said at one point he checked in with a woman, whose name is redacted, about when the machines would be returned, and “she advised they were almost done.”

State police found that both security seals on one machine indicated that it had been tampered with, the records show. The seals were intact on the other machine.

Greg Watt, the township clerk, whose job includes safeguarding election equipment, told investigators that he did not know the identity of the third party who accessed the voting machines, according to the records. Police documents identify Watt by name and call him a witness in the case.

Watt and Bawol did not respond to requests for comment.

The breaches are costing taxpayers money. The Richfield Township Board voted on May 25 to purchase two new vote tabulators and three memory devices at a cost of $8,763. The move was necessary to “ensure election integrity,” Watt said at the board meeting, according to an audio recording reviewed by Reuters.

State police have also sought to question the Roscommon county clerk in connection with a separate alleged voting system breach, the police records reveal. The county clerk, whose name is redacted in the documents, is Michelle Stevenson, a Republican.

In February, the county clerk acknowledged to a state election official that she had provided a data storage drive containing election information “for one or both” of Richfield Township’s vote tabulators to an unidentified third party, according to an email from the official to police, in which the name of the clerk was also redacted. She also gave the person access to one of Roscommon County’s vote-tabulating machines, according to the email.

When state investigators attempted to interview the county clerk on Feb. 17, she indicated a willingness to speak with police but declined to discuss the matter at that time, the police records show. 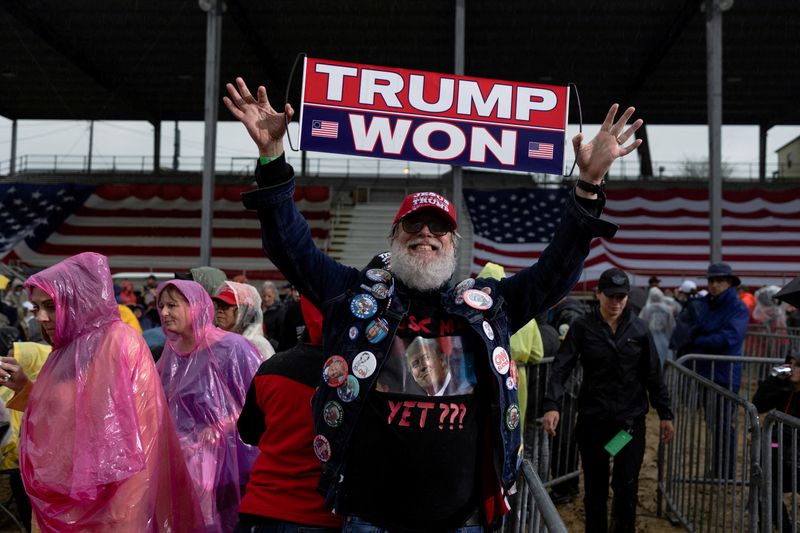 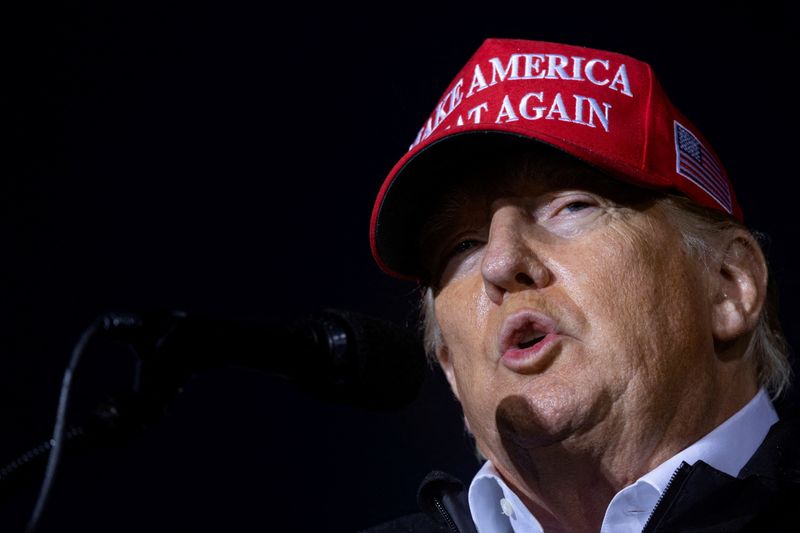 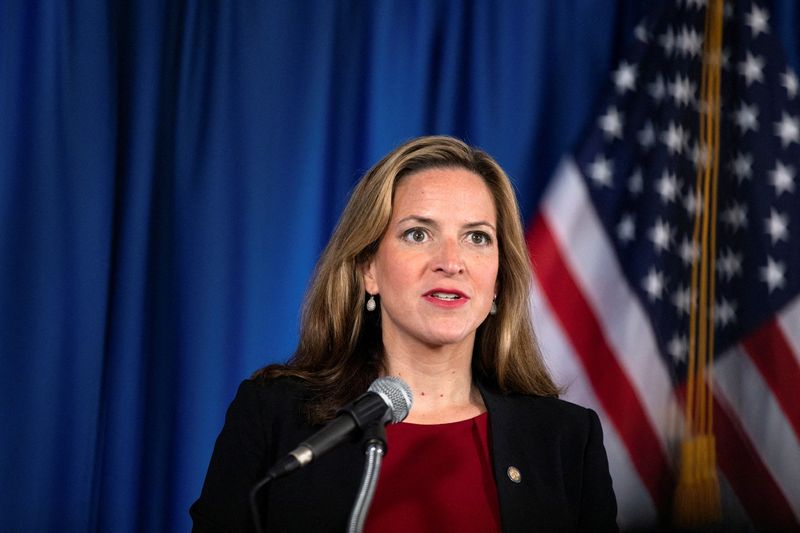