(Reuters) -The Russian rouble hit three-week highs against the euro and U.S. dollar in volatile trading on Tuesday, continuing to climb despite recent interest rate cuts and a looming economic crisis.

Against the dollar, the rouble added 0.4% to trade at 56.54, having dipped from multi-year peaks with a session low of 55.6 on the Moscow Exchange earlier on Tuesday.

The Russian currency has been supported by capital controls that Russia imposed in late February after sending tens of thousands of troops into Ukraine, though the recent strength has triggered policymakers to rethink their economic response to Western sanctions.

After the rouble became the world’s best-performing http://fingfx.thomsonreuters.com/gfx/rngs/GLOBAL-CURRENCIES-PERFORMANCE/0100301V041/index.html currency, authorities eased capital controls and scrapped a requirement for export-focused companies to convert their foreign-currency revenues.

The central bank’s decision to cut its key rate to the pre-crisis level of 9.5% last week was also designed to ease upside pressure on the rouble.

A strong rouble dents the incomes of exporters and Russia’s budget but is beneficial for importers, making foreign goods and services cheaper. However, Russian imports have waned drastically due to unprecedented Western sanctions and disrupted logistics chains.

The Moscow Exchange said on Tuesday it would suspend trading the Swiss franc against the U.S. dollar and the rouble due to the sanctions Switzerland has imposed on Russia from June 10.

Russian stock indexes were up slightly after starting the day weaker. 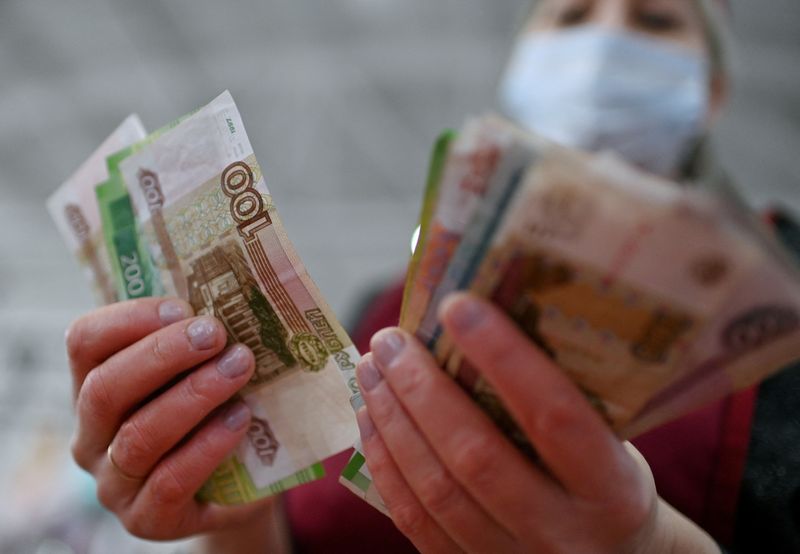