FAYETTE, Alabama, (Reuters) – Rising from a muddy field on the outskirts of the small town of Fayette, Alabama is a bricks-and-mortar symbol of the global COVID pandemic: A new glove factory.

When completed in 2024 the complex, owned by Japan’s SHOWA Glove Co will be able to produce about 3 billion medical-grade nitrile gloves a year from its dozen massive new, five-stories-tall, automated assembly lines.

That may seem like a lot but is only a small slice of the over 100 billion consumed in the United States annually.

“There’s a burgeoning glove manufacturing industry popping up in this country, a lot of it funded by the government,” said Dan Izhaky, chief executive of New York-based United Safety Technology, which got $96 million in federal backing to begin to transform an empty Baltimore steel plant.

Demand for gloves spiked early in the pandemic, spotlighting a glaring weakness in the U.S. supply chain for all types of medical safety equipment. Most of it comes from factories in Asia.

SHOWA was expanding a small, decades-old glove factory in Fayette – originally built to make old-style latex gloves – when the pandemic struck. Seeing an opening for a revival of larger-scale U.S. glove manufacturing as the government reconsidered the wisdom of heavily relying on foreign sources, the company decided to triple the size of its expansion.

At least 12 other companies – a mix of domestic startups and Asian and U.S. producers looking to gain or expand U.S. footholds – are building new glove plants, including the one inside the former Baltimore steel mill and another in a former Caterpillar factory outside Chicago. One entrepreneur wants to build a plant on a Navajo reservation in New Mexico.

The U.S. Department of Health and Human Services (HHS) has so far committed $572 million to five glove projects, including $81.3 million for SHOWA, “that will result in domestic capacities that can produce more than 600 million nitrile gloves per month,” according to a HHS spokesperson.

Izhaky knows the risks of jumping into a pandemic-related business.

He and a partner hastily built a face mask factory with private funds in Los Angeles early in the COVID crisis but was forced to shutter it when mask prices collapsed and customers evaporated. Most of the mask factories that sprang up during the pandemic have closed.

Despite that experience, Izhaky and other producers are counting on customers willing to pay some premium for U.S.-made gloves, as well as federal mandates such as requiring them in government safety stockpiles. A group of glove makers are discussing forming a trade group to push for such mandates and lobbying is underway, company officials said.

“The VA, DHS, TSA, they all use huge amounts of gloves,” said Izhaky, reeling off a list of federal agencies. “We’re expecting that they’ll be mandated to purchase Made in America.”

But it remains a risky proposition. The Biden administration has not guaranteed it will buy the output of these new operations, and the cost of producing domestically, even using the latest equipment, is expected to remain higher than imports.

Modern glove factories are modeled on those developed in Asia, a reverse of the decades-old pattern of companies in advanced economies developing industries in low-cost regions. Izhaky’s project has 45 U.S. employees and a team of 28 in Malaysia with industry experience.

Alison Bagwell is an American engineer who spent most of her career working for Kimberly-Clark, setting up glove factories in Thailand and Malaysia. With private backing, she is building a $70 million plant in Sandersville, Georgia, set to open next year.

“I feel pretty confident that I can do this,” she said, “having done it in a third world country.”

In Fayette, the SHOWA factory is churning out gloves in the original production area and a towering new addition that holds the first four new production lines. Behind the building, a new structure for four additional lines is nearly complete, while another four-line building has yet to break ground.

Plant manager Scott Robertson leads the way past a team of women catching clumps of blue gloves as they are automatically pulled off ceramic hands used to mold them and piled into stacks.

“We have to use these auto stackers,” he said, referring to the machines that gather the gloves, “because gloves are coming off the line so fast there’s no way a person could keep up.”

The company is planning to install new machinery in this spot that will do the job of putting the gloves into boxes.

“We have to do everything we can to control cost,” said Gilbert LeVerne, the company’s marketing director, “because this country is cost impulsive – the disaster goes away and the mindset shifts back to the bottom line.” 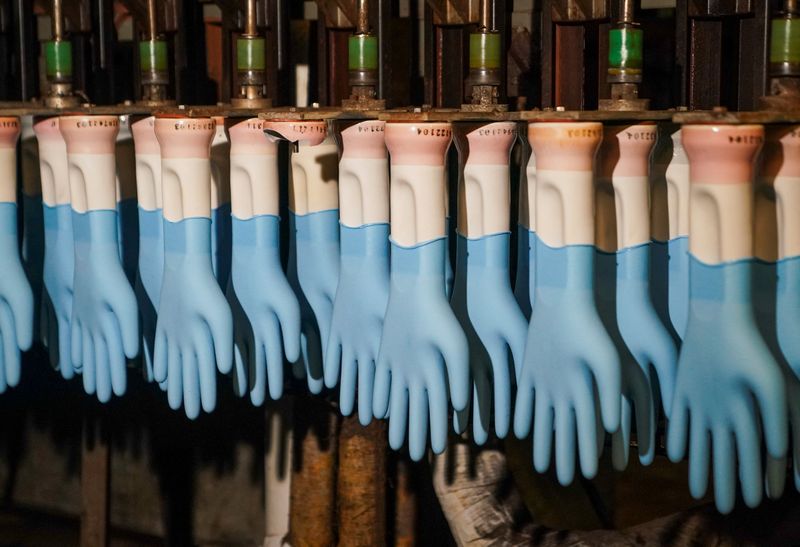 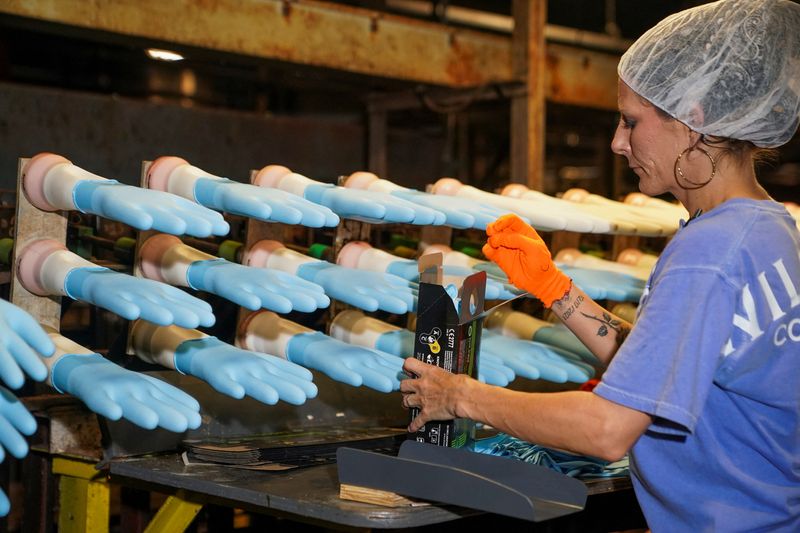 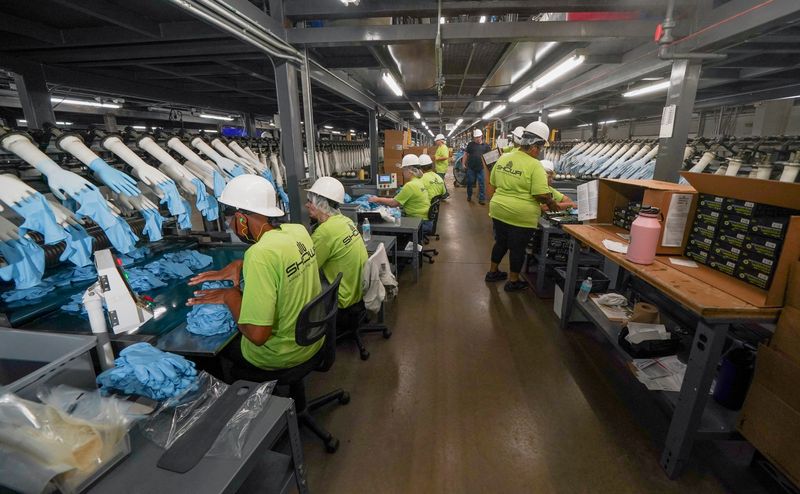