WASHINGTON – Badly stung by the U.S. Supreme Court’s decision to overturn Roe v. Wade on Friday, the abortion rights movement finds itself splintered, demoralized and faced with a startling landscape in which the procedure may be outlawed in half the country.

Angry grassroots activists are calling past efforts an “abject failure.” They say national abortion rights advocacy groups were so consumed with winning federal elections they allowed conservatives to chip away at abortion rights through state-level legislation over decades.

At the same time, those groups have raised and funneled hundreds of millions of dollars to Democratic congressional and presidential candidates – largely for naught, the activists say.

Mini Timmaraju, president of NARAL/Pro-Choice America, one of the most powerful national abortion rights groups, said the movement should take a hard look at its tactics.

“As the right was being whittled away in the states, federal voices were still focused on protecting Roe,” said Timmaraju, who was named to her post last year. “It would be malpractice not to investigate what happened.”

NARAL and other abortion-rights mainstays, including Planned Parenthood and EMILY’s List, say they are increasingly investing in state-level politics. But they insist a robust federal presence remains vital to ward off Republican attempts to pass an outright national abortion ban in Congress.

With Roe overturned, the divide within the abortion rights movement is widening along progressive and moderate lines, much like the current Democratic Party, grassroots activists say.

“The fight is in the states,” says Kellie Copeland, executive director of Pro-Choice Ohio. “Washington has had their chance – and they failed.”

Mainstream groups want to largely stay the course they have followed since the 1973 Roe v. Wade decision. They hope the Supreme Court ruling will galvanize voters in November’s elections, perhaps helping Democrats retain control of Congress and boosting efforts to codify Roe’s protections into federal law.

Progressive activists say it is time to turn the focus to ensuring women and people who seek abortions can obtain them no matter where they live.

The path toward the Supreme Court’s decision begins with conservative Republicans, who for 40 years pushed to nominate federal judges hostile to Roe and worked at the state level to pass laws limiting abortion rights.

More than 1,330 restrictions on abortion have been passed by state legislatures since Roe became law, according to the Guttmacher Institute, which tracks abortion access. Some 44% of those restrictions passed in the last decade alone. The Friday ruling further empowers these state legislatures to determine the legality of abortion – potentially limiting access for millions of women nationwide.

“The pro-choice movement made a grave error,” said Merle Hoffman, who opened an abortion clinic in New York in the early 1970s. “They minimized the strength and the persistence of their opposition.”

Experts and advocates point to various legal and political turning points in the battle over abortion rights: a 1992 Supreme Court decision that allowed states to start reducing abortion access; the 2010 midterms that resulted in huge Republican state-level gains; the success of Senate Republicans in keeping an Obama Supreme Court nominee off the court; and the unwillingness of Democratic presidents to make abortion rights and access a priority while they had party majority in Congress.

But several said the biggest sea change in the fight was cultural. Conservative activists were able to transform the right to have an abortion from a feminist principle to something that became a moral dilemma, aided by technology that allowed people to see images of fetuses.

Abortion became stigmatized, activists say. Democrats spoke of making it “safe, legal and rare,” instead of speaking of it as a right.

Legal abortion has maintained broad public support. In a Reuters/Ipsos poll conducted last month, 71% of respondents, including 60% of Republicans, said they believed the decision to terminate a pregnancy should be left to a woman and her doctor.

Amelia Bonow, co-founder of Shout Your Abortion, a progressive advocacy group aimed at normalizing abortion, is part of a new wave of activists who have lost faith in the political process and the courts.

Instead, they want to utilize other tools – telemedicine, abortion pills, travel – to help women in need obtain abortions regardless of the state they live in.

“We are creating a world we can survive in,” Bonow said, in the face of what she called “an abject failure.”

Mallory Schwarz, the executive director of Pro-Choice Missouri, watched with dismay in 2019 as Republican lawmakers in her state passed a sweeping anti-abortion bill that would ban the procedure if the high court gutted the federal protections.

Despite her pleas, she said, much-needed financial help from her parent organization, NARAL, never came.

“It’s been really disappointing to be left behind while national groups make statements about the millions of dollars that they are going to throw away on a couple of Senate races,” said Schwarz, whose group is no longer affiliated with NARAL.

NARAL said it decided to switch to an “integrated national structure” rather than relying on independent affiliates.

NARAL, Planned Parenthood and EMILY’s List spent more than $190 million during the 2020 election cycle to elect abortion rights supporters, with the vast bulk of the spending on the federal level.

The mainstream abortion rights groups argue they still have a significant role to play, but said the funding of federal political campaigns ultimately failed to protect abortion rights.

“It would be foolish to think we can continue with business as usual,” said Timmaraju. “There is an opportunity to do some innovative thinking.” 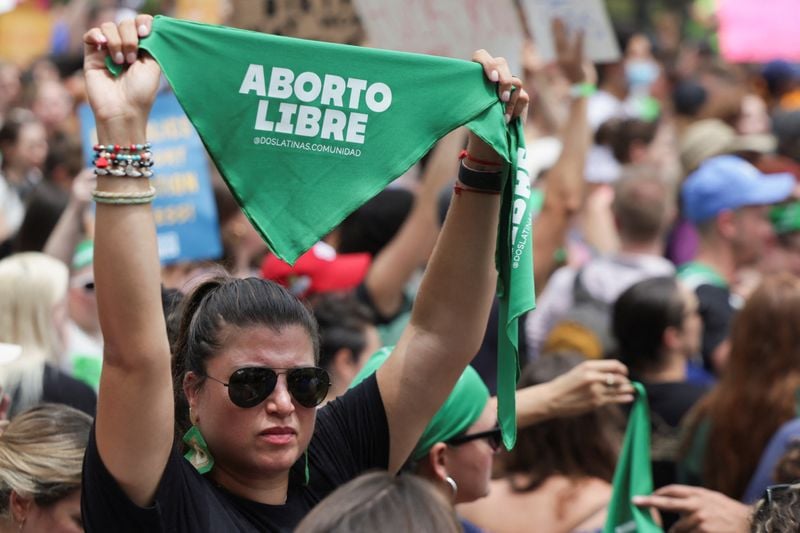