WASHINGTON (Reuters) – The U.S. Supreme Court decision upending nearly a half century of legal protection for abortion rights is sharply at odds with public opinion in a country where a sizable majority of people support abortion rights.

Here are some key takeaways on Americans’ views on abortion rights from a Reuters/Ipsos poll conducted before the Supreme Court released its decision:

About 71% of Americans – including majorities of Democrats and Republicans – say decisions about terminating a pregnancy should be left to a woman and her doctor, rather than regulated by the government. But that support is not absolute: 26% of respondents polled said abortion should be legal in all cases while 10% said it should be illegal in all cases. More than half of the 4,409 respondents to the Reuters/Ipsos poll said that abortion should be legal in some cases but illegal in others.

Republicans are much likelier than Democrats to support restrictions on abortion. But while Republicans in Congress overwhelmingly support crackdowns on abortion, 36% of Republican respondents to the survey said abortion should be legal in most or all cases. Similarly, 34% of Democrats think abortion should be illegal in most or all cases. A fifth of Democrats said it was too easy for women to get an abortion.

About three-quarters of women agreed with the statement that decisions about abortion should be left to a woman and her doctor, compared with about two-thirds of men. Some 63% of Republican women supported this statement.

Abortion rights will help shape the November midterm elections, which will determine control of the U.S. Congress and 36 governors’ seats. State legislatures are also in play, and the elections could factor into many state-level attempts to restrict abortion access. About 34% of respondents said Democrats had better plans for abortion policy, compared with 26% who preferred the Republican approach. The rest of respondents picked neither party or said they did not know which was better.

* The Reuters/Ipsos poll was conducted May 16-23, online, in English, throughout the United States. It gathered responses from 4,409 adults including 2,036 Democrats, 1,637 Republicans and 530 independents. The results have a credibility interval, a measure of precision, of between 2 and 5 percentage points. 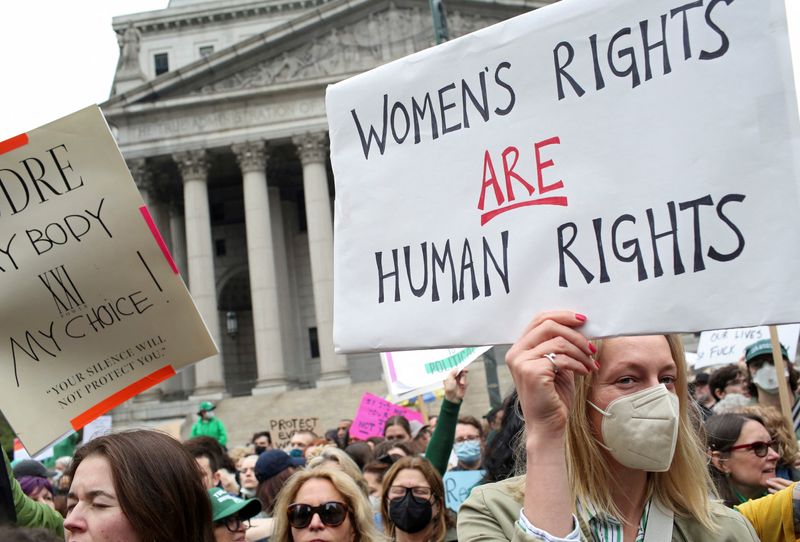