(Reuters) – The Supreme Court’s decision on Friday to overturn the 1973 Roe v. Wade ruling that legalized abortion nationwide will give conservative U.S. states more confidence that their new limits on abortion will stand, while liberal states will feel more urgency to protect and expand abortion rights.

Here are some restrictions and protections state legislatures have taken up in 2022:

ARIZONA: Republican Governor Doug Ducey in March signed a bill banning abortions after 15 weeks of pregnancy. The measure makes exceptions for medical emergencies, but not for rape or incest. It will take effect later this year if not blocked in court.

FLORIDA: Republican Governor Ron DeSantis in April signed a 15-week abortion ban, which allows exceptions for medical emergencies or if the fetus has a fatal abnormality. The exceptions do not allow for abortion past 15 weeks in cases of rape, incest or human trafficking. The ban is due to take effect on July 1 if it is not blocked in court.

IDAHO: Republican Governor Brad Little signed a six-week abortion ban in March that allows family members of the fetus to sue providers who perform abortions past that point, similar to a Texas law enacted last year. The Idaho law was due to take effect in April, but has been blocked by the state Supreme Court. A hearing is set for August.

KENTUCKY: The legislature in April overrode Democratic Governor Andy Beshear’s veto to enact several abortion restrictions, including a 15-week ban, a requirement that fetal remains be cremated or interred and a requirement that a combination birth-death or stillbirth certificate be issued for each abortion. The law took immediate effect, suspending clinics’ ability to provide abortions for eight days until a U.S. judge temporarily blocked its enforcement.

LOUISIANA: Democratic Governor John Bel Edwards in June signed legislation that would strengthen the state’s trigger law, which goes into effect if Roe is overturned. The measure bans all abortions except in medical emergencies and increases the criminal penalties for healthcare workers who provide abortions to a maximum $100,000 fine and 10 years in jail.

The law signed on May 26 banned all abortions except in cases of medical emergency, rape or incest. It took effect immediately and shut down the state’s abortion services. It relies on private citizens to sue providers and any person who “aids or abets” abortions to be enforced.

Earlier in May, Stitt signed a ban on abortions after six weeks of pregnancy. It relies on the same lawsuit enforcement mechanism and also took effect immediately.

A bill signed in April bans abortion except in medical emergencies and penalizes providers who violate the law with up to $100,000 in fines and 10 years in prison. The law is due to take effect in August.

SOUTH DAKOTA: Republican Governor Kristi Noem signed a bill in March requiring women to make three in-person doctor’s visits to complete a medication abortion. A federal judge temporarily blocked the law from taking effect in response to a lawsuit by Planned Parenthood. In May, a federal appeals court put the case on hold until the U.S. Supreme Court ruled on the case involving federal abortion rights.

COLORADO: Governor Jared Polis, a Democrat, signed a bill on April 4 codifying the right to have an abortion. The measure immediately took effect.

CONNECTICUT: In May, Democratic Governor Ned Lamont signed a bill that protects anyone who provides abortions, has an abortion or assists someone having an abortion from other states’ restrictions. Among other provisions, the measure bars state agencies from assisting in interstate investigations seeking to hold someone civilly or criminally liable for getting or aiding an abortion. The law is due to take effect on July 1.

MARYLAND: The legislature passed a bill that expands the definition of who can provide abortions to include any “qualified provider,” establishes a state-funded abortion provider training program and requires most insurance plans to cover the cost of abortions. Republican Governor Larry Hogan vetoed the bill, but the state’s Democratic-controlled legislature overrode his veto on April 9 and the law is due to take effect on July 1.

NEW YORK: Democratic Governor Kathy Hochul in June signed legislation that protects the state’s abortion providers and patients from other states’ penalties on abortion. The laws, which took immediate effect, allow individuals to file claims against anyone who sues or brings charges against them for facilitating or obtaining an abortion, and prohibit state courts from cooperating in civil or criminal lawsuits stemming from abortions that took place in New York.

VERMONT: The Democratic-led legislature in February passed a constitutional amendment that guarantees the right to abortion. It will be on the ballot for voters to approve in November. 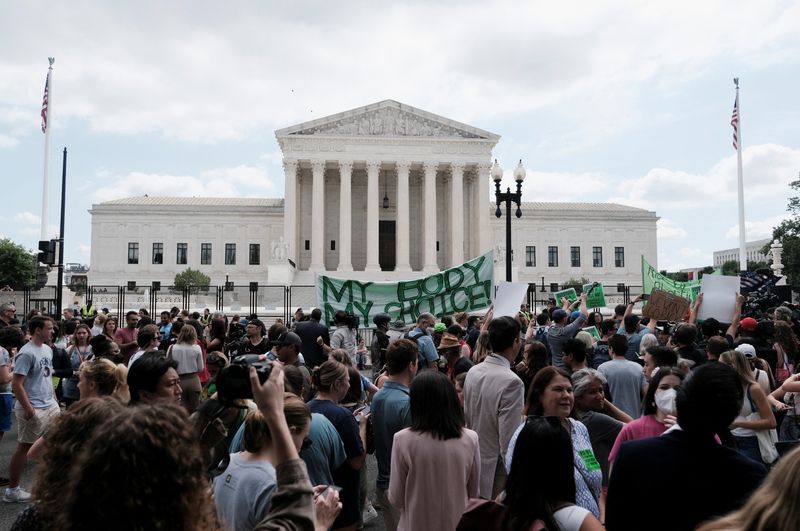