In a 5-4 ruling powered by its conservative majority, the high court overturned the 1973 landmark decision that had recognized a woman’s right to an abortion, and had legalized it nationwide, for nearly half a century.

The decision was greeted as a stunning victory by anti-abortion Republicans and other conservatives, while Democrats and abortion-right activists protested what they described as a step backwards for the rights of American women.

But with control of the House of Representatives and the Senate at stake in the Nov. 8 midterm elections, Democrats also warned that the rights of women and others would face further dangers if Republicans regain control of Congress.

“The Republicans are plotting a nationwide abortion ban. They cannot be allowed to have a majority in the Congress to do that,” said House of Representatives Speaker Nancy Pelosi, the chamber’s top Democrat, told reporters.

“It is clear that we just have to win a majority in November. Everything is at stake,” added Pelosi, a Catholic who was barred from taking communion last month by the archbishop of San Francisco because of her support for abortion rights.

About 71% of Americans – including majorities of Democrats and Republicans – say decisions about terminating a pregnancy should be left to a woman and her doctor, rather than regulated by the government, according to Reuters/Ipsos polling.

Democrats hope voter anger about the Supreme Court’s decision will help them retain their razor-thin margins of control in the House and Senate. With President Joe Biden’s approval rating slumping, most forecasters have so far favored Republicans’ chances of winning a majority in at least the House.

“This fall, Roe is on the ballot. Personal freedoms are on the ballot. The right to privacy, liberty, equality are all about it,” Biden said on Friday.

It was not clear how easily Democrats could use the abortion rights message to mobilize support. Despite having control of the White House and both chambers of Congress for nearly 18 months, Biden and his Democratic allies have disappointed their core supporters with repeated failures on hot-button issues including abortion, voting rights and social spending.

Efforts to reform the Senate filibuster and overcome Republican opposition to the Biden agenda have been hamstrung by opposition from within their own party, specifically Democratic Senators Joe Manchin and Kyrsten Sinema.

Even their success at enacting moderate gun-safety legislation proved uninspiring to strong gun-control advocates and was overshadowed twice by the Supreme Court, which broadly expanded gun rights a day before overturning Roe v. Wade.

“Elect more MAGA Republicans if you want nationwide abortion bans, the jailing of women and doctors and no exemptions for rape or incest. Or, elect more pro-choice Democrats to save Roe,” Schumer said in a statement.

House Republicans welcomed the ruling and talked openly about a path forward to “end abortion in this country.”

“The Supreme Court’s decision overturning Roe v. Wade, overturning that flawed decision finally allows states and Congress to protect life in ways that we never were able to for the last 50 years,” Representative Steve Scalise, the No. 2 House Republican, told reporters. 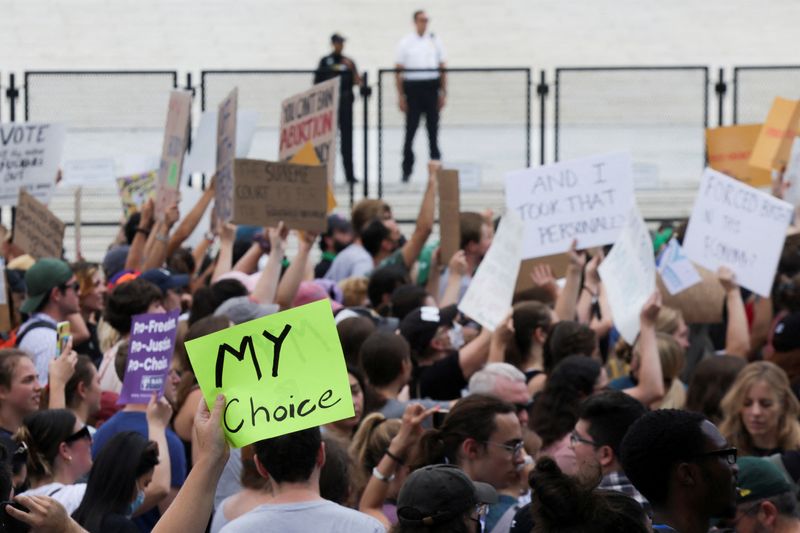