By Ahmed Eljechtimi and Graham Keeley

RABAT/MADRID -Dozens of migrants were pictured lying by a Moroccan border fence, some bleeding and many apparently lifeless, in video showing the aftermath of an attempted mass crossing into a Spanish enclave on Friday in which at least 23 died.

Moroccan authorities said the disaster occurred after migrants attempted to breach a fence into the Melilla enclave, with some dying in a crush after what authorities called a stampede, and others falling as they climbed.

The Moroccan Association for Human Rights (AMDH) local head Omar Naji said its members and sympathisers had shot the footage, which showed large numbers of badly injured people piled together with Moroccan security forces standing over them.

He said migrants had lain injured for hours without medical treatment, leading to a higher death toll.

Some 2,000 migrants had tried to reach Spanish territory by storming the enclave fence before battling border guards for two hours, with about 100 making it across the frontier.

Morocco said 23 migrants had died and scores were injured, but AMDH said the death toll was 29, citing unnamed local medical officials. Reuters has not managed to speak to any of the migrants who tried to cross.

The mass crossing was the first attempted from Morocco into one of Spain’s two North African enclaves since Rabat and Madrid agreed this year to bolster cooperation on border control.

That deal, which ended months of frosty relations, came after Spain backed Morocco’s stance over Western Sahara, a disputed territory that Rabat says is its own, but where an independence movement is fighting for a separate state.

Spanish Prime Minister Pedro Sanchez called the raid “an attack on the territorial integrity of our country” and blamed it on people traffickers. Scores of Moroccan and Spanish security personnel were also injured.

However, Melilla regional president Eduardo de Castro said the images were difficult to explain and accused Moroccan security forces of a disproportionate response.

One AMDH video showed dozens of African migrants piled together, many motionless and a few making feeble movements as Moroccan officers in riot gear looked on.

The same clip showed security forces pulling two bleeding and dazed-looking migrants past those lying on the ground. Another showed a Moroccan security officer striking a person who lay prone.

Friday’s incident followed days of rising tension in the area around Melilla, according to Ousmane Ba, a Senegalese migrant in nearby Nador who runs a community group to help other migrants.

Ba, who neither took part in Friday’s incident nor witnessed it, said migrants living nearby had clashed several times with Moroccan security forces while trying to cross the fence earlier this week.

Many of them are living rough in countryside nearby and were desperate, he said. “I have never seen migrants attacking this violently. We deplore the deaths near the fence,” he said.

A Spanish police source said the migrants who stormed the fence had used sticks, knives and acid against security forces and had changed tactics to try crossing at one perceived weak spot en masse, rather than in separate attempts along the fence.

Images posted on Twitter by Spain’s Civil Guard union – whose veracity Reuters was unable to verify – showed a large column of mostly young male migrants streaming through streets near the border.

Some appeared to be carrying sticks and throwing projectiles as puffs of smoke marked the air around them.

Footage posted on the Facebook page of Segnan Live, a local TV station, showed migrants grappling at a small section of border fence in a large group as sirens sounded nearby and tear gas canisters released plumes of smoke.

An image of the aftermath published by AMDH showed a large concentration of people lying at what appeared to be a frontier gate, in an enclosed corner where two high metal fences met, with ambulances standing nearby.

The AMDH and Spanish rights groups issued a statement calling for formal investigations into the disaster and for authorities to not bury those killed until afterwards.

“This is the most serious incident (on the border between Spain and Morocco) since 2014 when 15 people died,” said Esteban Beltran, director of Amnesty International in Spain. 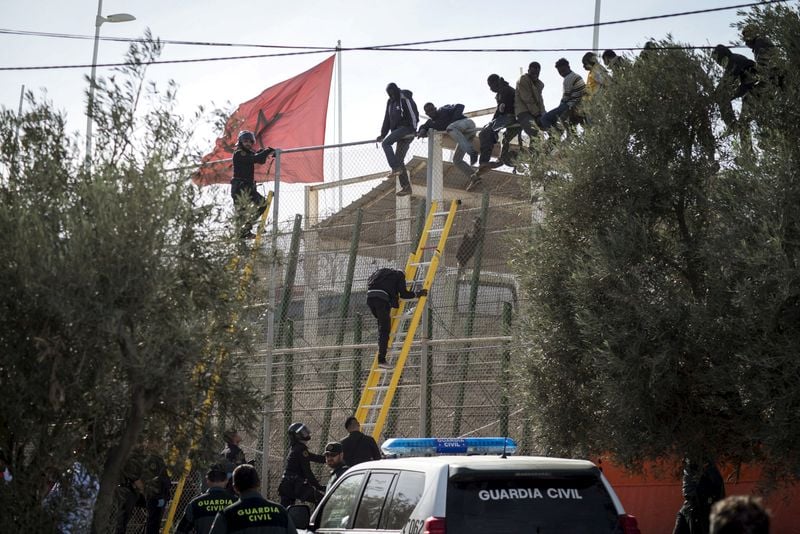