The Portuguese village of Sintra has been the scene of momentous speeches by European Central Bank policymakers. They include Mario Draghi’s hawkish turn in 2017, and then his 2019 speech highlighting the need for more stimulus.

Both times, currency and bond market fracas ensued. So, traders are on high alert for what current ECB president Christine Lagarde might say when she takes to the Sintra stage at 1000 GMT, later on Tuesday.

Record inflation means she probably won’t walk back plans to raise interest rates to positive territory by September, yet she might just drop some hints on how she plans to structure an “anti-fragmentation tool” that will allow the ECB to safeguard southern states such as Italy, while raising interest rates.

Meanwhile, with one eye on inflation, German 10-year borrowing costs jumped 10 basis points on Monday and are opening higher still.

Bond traders overall are trying to figure out whether central banks will hold their nerve on raising interest rates or cave in to weakening growth well before inflation is tamed.

And watch that consumer. Data just out showed French consumer confidence plunging to the weakest since 2013, while German sentiment is projected to hit record lows in July.

On equities, so-called growth stocks — beneficiaries of borrowing costs staying low — rallied Monday. The dynamic continues, with futures pointing to a firmer open for the growth-oriented Nasdaq tech index than the broader S&P 500. European markets too are up more than half a percent.

(Reporting by Sujata Rao; editing by) 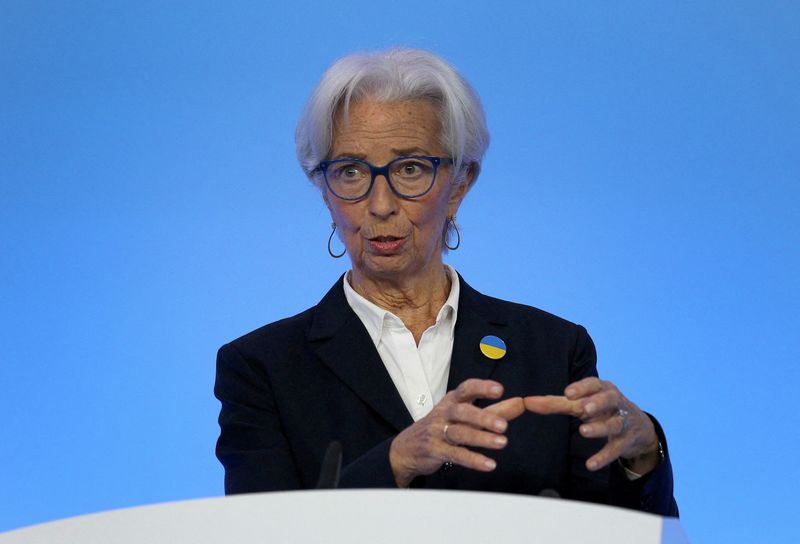