VATICAN CITY -Nancy Pelosi, the speaker of the U.S. House of Representatives who is banned from communion in her home city of San Francisco because she supports abortion rights, met Pope Francis on Wednesday and received the sacrament from a priest at a papal Mass.

A witness said the speaker, a Catholic who is visiting Rome, received communion from a priest in a section of St. Peter’s Basilica during a papal Mass on the feast of St. Peter and Paul. The pope does not give communion himself at such ceremonies.

A Vatican photo showed Pelosi and her husband Paul greeting the pope briefly in the basilica before the Mass began.

Although Pelosi is barred from receiving it in San Francisco by the city’s conservative archbishop, Salvatore Cordileone, she regularly takes communion at a parish in Washington, D.C., where the archbishop of the U.S. capital allows it.

Francis has no control over who receives communion during papal Masses and it was not clear if he was aware that Pelosi was in the church.

Anyone who wishes to take the sacrament merely approaches one of the dozens of priests who fan out through the huge basilica.

But his decision to greet her separately before the start of the Mass appeared to be the latest rebuke to conservative American bishops who he says have politicised the issue of Catholic office holders who oppose abortion personally but support abortion rights for others.

Last month, Cordileone issued an order against Pelosi, 82, taking communion in his archdiocese. Since then, at least three other conservative bishops have banned her from receiving communion in their dioceses.

Cordileone’s May 20 order said “she is not to be admitted to Holy Communion unless and until she publicly repudiates her support for abortion ‘rights’ and confesses and receives absolution for her cooperation in this evil”.

The Mass was also attended by Newt Gingrich, the Republican former U.S. House speaker who is one of Pelosi’s political adversaries and has welcomed Friday’s Supreme Court decision.

Both Pelosi and Gingrich attended an Independence Day reception on Tuesday evening at the residence of the U.S. ambassador to the Vatican, Joe Donnelly. She spoke of her faith in an address to attendees. Gingrich’s wife Callista is a former U.S. ambassador.

Last October, U.S. President Joe Biden, who is also Catholic, received communion while attending Mass in the American church of Rome, a day after he met Pope Francis. Biden said later that the pontiff had told him he is a “good Catholic” who can receive the sacrament.

Biden, the second Catholic U.S. president after John F. Kennedy, has said he personally opposes abortion but, as an elected official, cannot impose his views on others.

“Communion is not a prize for the perfect,” the pope told reporters last year when asked to comment on the U.S. debate about abortion and Catholic politicians. “Communion is a gift, the presence of Jesus and his Church.” 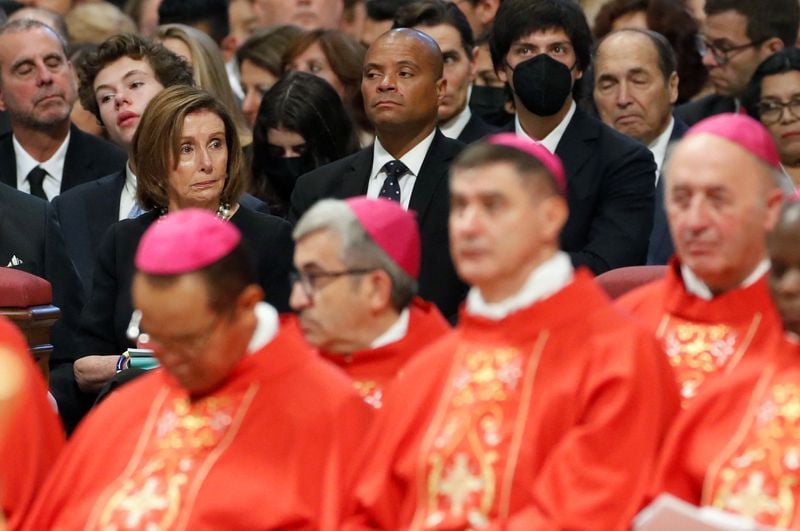